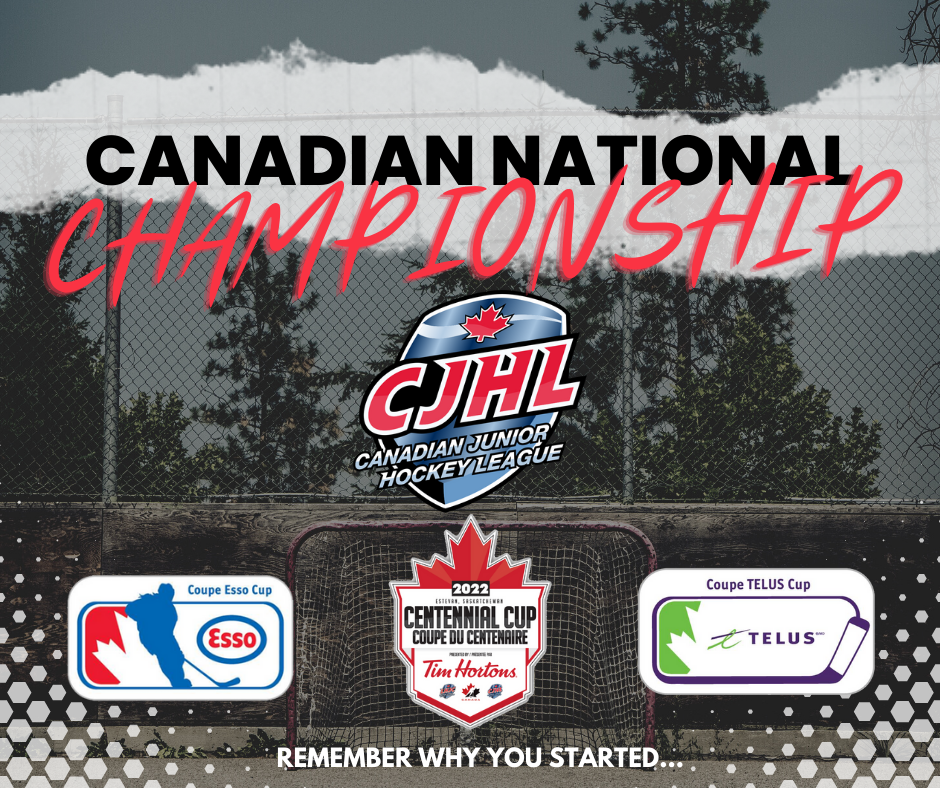 Meanwhile, the Canada's men's Jr. A Centennial Cup national-championship tournament began May 19 and runs through May 29. It is being hosted by the Estevan Bruins in Estevan, Saskatchewan.

These tournaments have not been held the last two years because of COVID.

All preliminary-round games, the quarterfinals and semifinals will be streamed live on HockeyCanada.ca. The championship game will be broadcast on TSN and streamed on TSN.ca.

CLICK HERE for the Centennial Cup schedule and results

Information about the competing teams, their leagues and how they qualified can be found by accessing our North American Jr. Hockey Playoff Primer.

The men’s U18 national club championship has been held since 1974, with five regional champions joining the host team to compete to be the best in all of Canada. The LHM18AAAQ champions earn an automatic berth into the field of six, while the other regional spots are filled by the champions of the Pacific (B.C. and Alberta), West (Manitoba, Saskatchewan and Northwest Ontario), Central (GNML, MHAO, GTHL, OMHA and HEO) and Atlantic (Nova Scotia, Labrador, New Brunswick and Prince Edward Island).

CLICK HERE for the TELUS Cup schedule and results

#118 Sydney Rush (HOST) – The Telus Cup was supposed to be hosted in Cape Breton, Nova Scotia, last year, so while it is taking place in Alberta in 2022, the Rush were granted the automatic host bid since Hockey Canada decided earlier this year as the Omicrom variant spread that the Teuls Cup would be held at a neutral venue. Cape Breton will be given the chance to host the tournament in the future. The Rush are the fourth-ranked team in Nova Scotia with an overall 17-24-0 record and a 131-156 goal differential. They earned a 5-3 victory over Nova Scotia’s top-ranked and Canada’s 33rd-ranked Halifax McDonald’s Oct. 31.

#5 Mississauga Reps (CENTRAL) – The Reps are 43-8-5 on the season and enter the Telus Cup on a seven-game unbeaten streak. They also are unbeaten in 11 of their last 12 outings (9-1-2). The only loss during that span was a 3-2 overtime setback in the GTHL championship game vs. the No. 26 Toronto Nationals. Despite that loss, they earned a spot in the Central Championship as the host team, went unbeaten in the preliminary round and knocked off the No. 18 Nepean Raiders, 6-5 in the semifinals to set up a rematch with the Nationals, which they won, 3-1, April 10. Despite being shut down for much of January because of COVID restrictions, the Reps finished atop the GTHL at 22-3-3 and are Ontario’s top-ranked team. Five of Mississauga’s players were selected in the Ontario Hockey League Draft.

#8 Moncton Flyers (ATLANTIC) – Possibly the hottest team among the Telus Cup Field, Moncton enters the tournament having won 12 straight contests and 22 of its last 23 since nearly a two-month COVID shutdown. The top-ranked team in New Brunswick and Eastern Canada, the Flyers are 42-7-0 overall and have outscored their opponents, 251-83, while capturing league, provincial and regional titles. They have yet to lose in the postseason and beat the 33rd-ranked Halifax McDonald’s to earn the Atlantic Crown and the Trip to Okotoks.  Six Moncton players have been drafted by teams in the QMJHL.

#9 Magog Cantonniers (QUEBC) – The LHM18AAAQ champs are 43-12-0 overall and ranked first in Quebec, having outscored their opponents by a 260-127 margin. Magog earned the trip to Alberta with a four-games-to-one series win against the No. 11 Levis Chevaliers that culminated with a 4-3 overtime victory April 22. The Cantonniers, who finished second in their TELUS Cup the last two times it was held, have won 10 of their past 12 games. They lost to the Toronto Nationals in double overtime in the 2019 Cup final. The team overcame a two-month COVID shutdown this season to place second in the LHM18AAAQ regular-season standings at 30-9-0 before knocking off Levis to earn the trip to Alberta. Eight Magog players have been selected in the QMJHL draft.

#16 Vancouver North East Chiefs (PACIFIC) – The Chiefs are ranked fifth in British Columbia, 10th in Western Canada and 16th overall, one place ahead of the rival Vancouver North West Hawks. They are 39-16-2 overall and have outscored their opponents, 243-171. Vancouver is the first team from B.C. to earn a trip to the Telus Cup since the Okanagan Rockets in 2014. The Chiefs beat the 12th-ranked Calgary Buffaloes in a three-game series to earn the berth, including an overtime win in Game 2 and a one-goal decision in the finale. They captured the BCEHL regular-season title with just four regulation losses in 35 contests before dropping just one playoff game en route the postseason title. Two of their players have been drafted by Western Hockey League teams.

#40 Notre Dame Hounds (WEST) – The Hounds are looking for their sixth national championship and are the most successful program in tournament history. They are 44-12-0 overall entering the tournament after an impressive run through the SMAAAHL playoffs and West Region tournament. Notre Dame captured the SMAAAHL regular-season title by a single point over the No. 30 Saskatoon Blazers then went 9-2 in the league playoffs to capture the title. The Hounds won their first three regional-tournament games, too, but had to score with 17 seconds left to halt a rally by the Southwest Cougars in the regional final and advance to Nationals. They are the top-ranked team in Saskatchewan, 15th among Canada Prep schools and 22nd in Western Canada. Four of their players have been drafted by CHL major junior teams.

The Esso Cup has been contested since 2009 and brings together five regional champions from across Canada who compete against a host team. Quebec and Ontario provincial champions earn an automatic berth in the national tournament, with the remaining bids gong to regional champions: Pacific (B.C. and Alberta), West (Manitoba and Saskatchewan) and Atlantic (N.B., N.L, N.S. and PEI).

The tournament has propelled many players to spots on the Canadian National Team at all age levels.

CLICK HERE for the Esso Cup schedule and results

#35 Prince Albert Bears (HOST) – The Bears were awarded the opportunity to host the 2020 Esso Cup way back in 2018 but have had to wait out COVID for the opportunity to participate. Prince Albert was awarded the host bid this year when Hockey Canada decided to hold the 2022 event at a neutral site at the height of the Omicron variant outbreak. The Bears are the fifth-ranked team in Saskatchewan and the No. 35-ranked club in all of Canada. They are 12-27-0 coming into the Esso Cup and were swept by the 21st-ranked Saskatoon Stars in the first round of the SFU18AAAHL Playoffs.

#4 Notre Dame Hounds (WEST) – The fourth-ranked Hounds are 48-9-3 and have outscored their foes, 210-88. They also have a pair of goalies with goals-against averages below 1.40, the top-two numbers in the SFU18AAAHL. Notre Dame went 24-2-2-2 in league regular-season play, with three of the setbacks coming against the second-ranked Regina Rebels. The Hounds would avenge those losses, however, in the league finals by capturing three one-goal victories to capture the best-of-five series. They went on to punch their ticket to the Esso Cup by knocking off the No. 67 Westman Wildcats by identical 4-1 scores in two games. It’s been more than a decade since Notre Dame advanced to the ESSO Cup, but the last time they were there the Hounds came home with the gold medal.

#6 Durham West Lightning (ONTARIO) – Ranked sixth in all of Canada, Durham West brings an impressive 52-2-6 record into the Esso Cup, including victories in its last 13 outings. The Lightning have outscored their opponents, 196-39 on the year, recording better than 30 shutouts in the process. Durham West had several three-game shutout streaks and one four-game streak during the season. The Lightning lost just one regular-season OWHL game, capturing the regular-season crown with a 21-1-3 mark before allowing just five goals en route to the provincial title. The team continued its dominance throughout the year despite starting the season by going unbeaten in its first six outings before a two-month COVID shutdown.

#7 Fraser Valley Rush (PACIFIC) – In capturing the BCEHL regular-season and playoff championships, the Rush have gone 50-14-4 and outscored their opponents, 271-120. They have won seven of their last eight outings entering the Esso Cup. Fraser Valley recorded two one-goal victories against the No. 3 Edmonton Pandas to win the Pacific Region Championship and earn its way to Okotoks. The Rush dropped just three games during their regular-season league slate before becoming the first British Columbia team ever to beat the Albert provincial champs in the Pacific tourney. A young team with several 14-year-olds, Fraser Valley began the year with 13 new players in the lineup. They overcame a 1-3 showing at an early season tournament to earn the right to compete for a national championship.

#8 Northern Selects (ATLANTIC) – The Selects from Nova Scotia rolled to an eye-popping 43-2-2 record en route to the MMFHL, provincial and regional titles that landed them in Okotoks and in the Esso Cup. They allowed just 34 goals in 47 contests while scoring 193. Northern went five games without allowing a goal at one point and finished the year with 25 shutouts. Having a large number of players who have competed together for 10 years doesn’t hurt this group, which concluded the MMFHL regular season with 17 consecutive victories. Still they had to rally from a three-goal deficit to win the championship game before outscoring their opponents 38-3 to capture the Atlantic Region crown.

#23 Richelieu Remparts (QUEBEC) – It took a pulsating, heart-stopping 1-0 shootout upset win against the No. 10 Quebec A’s to get the 23rd-ranked Remparts to Okotoks, but here they are. Richelieu is 28-7-2 overall and has outscored its opponents, 134-64. The second-place regular-season finishers in the LHEQ, the Remparts were struggling late in the season entering the provincial championship and had gone 0-2-2 vs. the A’s. They won four playoff games by a total of just six goals to earn another shot at their rivals and pulled out the narrowest of victories. Richelieu was unable to get on ice as a team for nearly two months during Quebec’s COVID shutdown, but the Remperts found a way to come together and peak at the right time.