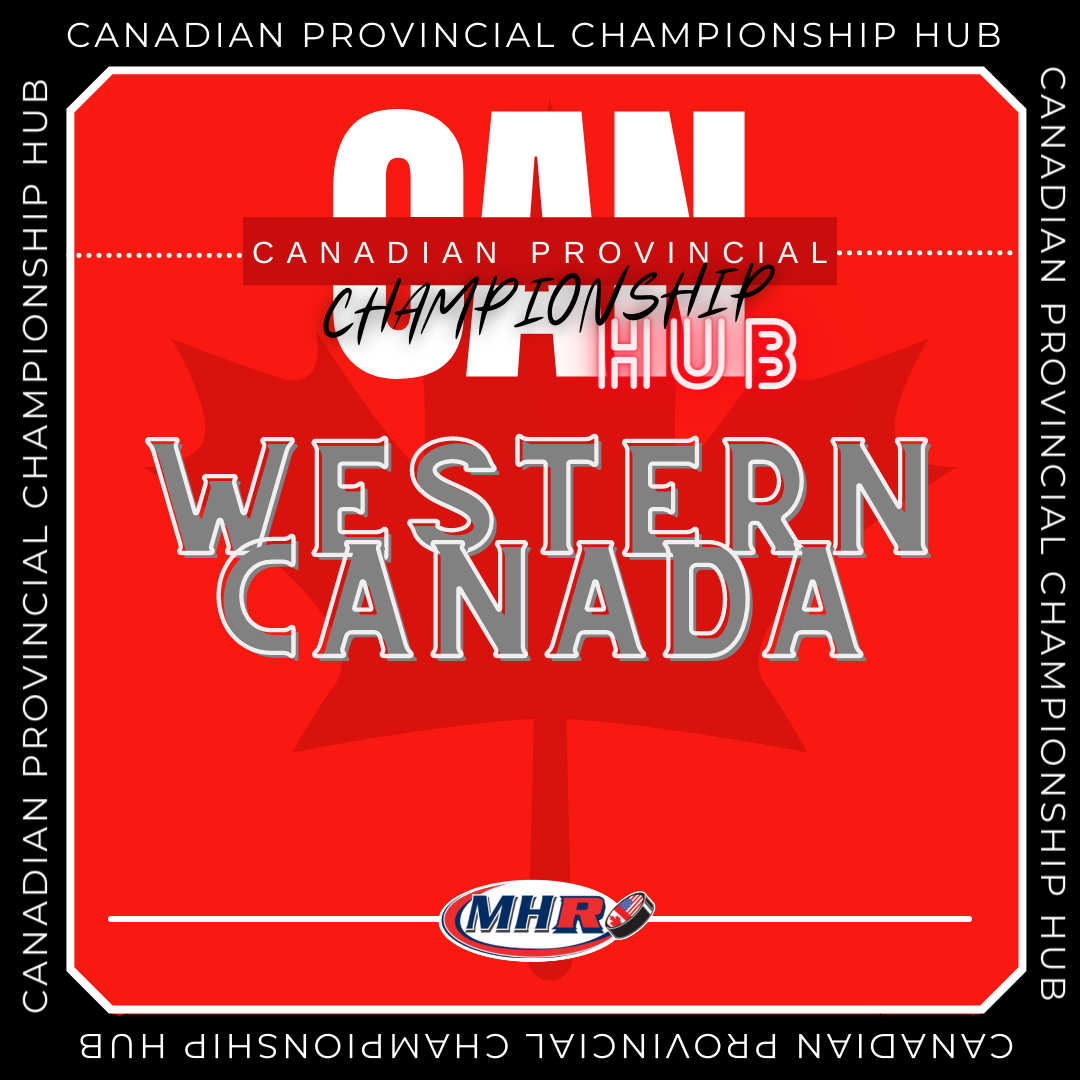 After a two-year COVID-induced hiatus, March and April playoff hockey has returned to Alberta. Host locations were announced for the province’s 29 weekend championship tournaments in December, and 32 champions will be crowned, starting with the boys' and girls champions out of the 18U AAA Alberta elite leagues. Various league champions and runners-up compete for provincial titles in most formats. There are highly ranked Alberta boys' and girls' teams at the U15, U16 and U18 levels compete in the school- and academy-based Canadian School Sports Hockey League (CSSHL). Those teams are listed in their appropriate age groups.

CLICK HERE for the Alberta Provincial Championships home page with links to all the results.

The Alberta Boys 18U AAA champion is determined by who wins the best-of-five Alberta Elite Hockey League championship series. In this year’s finals, the Calgary Buffaloes, ranked No. 6 by MHR in Western Canada, swept the No. 11 Fort Saskatchewan Rangers, three games to none. After allowing just four goals in three games, Buffaloes goaltender Nicholas Jones was named MVP of the playoffs.

The Alberta Boys U16 AAA championship was held in Grande Prairie, Alberta, April 7-10. In the April 10 championship game, the Edmonton CAC Canadians, ranked sixth in Western Canada, won their first provincial championship since 2014 with a 5-2 victory over the No. 3 Calgary Royals. The No. 8 Fort Saskatchewan Rangers beat the the second-ranked Calgary NWCAA Flames, 6-2, to earn the bronze medal.

Ranked U16 AAA Alberta Boys' Teams in the CSSHL (W. Canada U16 Rankings):

The St. Albert Sabres, ranked 13th in Western Canada by MHR, snuck into the championship game with a 2-1-1 record in round-robin play and then claimed the championship with a 5-1 victory over the No. 14 Okotoks Oilers.

The tournament was held March 24-27 in Fort Saskatchewan, Alberta

Ranked U15 AAA Alberta Boys' Teams in the CSSHL (W. Canada U15 Rankings):

The Alberta Boys U13 AA Championsship was held March 31-April 3 in Strathcona, Alberta. In the championship game, the Fort McMurray Barons, ranked 16th in Western Canada, beat the No. 22 Calgary NWCAA Broncs, 5-4.

The Alberta girls’ U18 AAA championship tournament was held March 17-20 in Calgary. Hosted by the Calgary Fire, the tournament featured four teams ranked among Canada’s top 23 at the time by MHR. The third-ranked Edmonton Pandas went 2-1-0 in round-robin play, advancing to the championship game where they knocked off the upset-minded No. 19 St. Albert Slash, who had gone undefeated in the preliminaries.

Games can be seen on-demand at www.HockeyTV.com.

Ranked U18 Alberta Girls' Teams in the CSSHL (Canada U18 Girls Rankings):

The Alberta girls’ AA U15 championship tournament was hosted by the Rocky Mountain Raiders March 17-20. The 34th-ranked Olds Grizzlys and No. 49 Calgary Fire surprised many by advancing to the gold-medal game, where the Grizzlys turned in a dominant performance to capture the championship.

Games can be seen at www.HockeyTV.com.

The British Columbia Elite Hockey League U17 Boys’ AAA Playoffs were held starting in March at rinks around B.C. Several top-ranked U16 and U17 boys’ AAA teams compete in the CSSHL Playoffs instead.

The British Columbia Elite Hockey League U15 Boys’ AAA Playoffs were held at rinks around B.C., beginning in March. Several top-ranked U15 boys’ AAA teams compete in the CSSHL Playoffs instead.

The British Columbia Elite Hockey League U18 AAA Girls’ Playoffs were held at rinks around B.C., beginning in March. Several top-ranked U18 girls’ AAA teams compete in the CSSHL Playoffs instead.

Ranked U18 B.C. AAA Girls Teams in the CSSHL (Canada U18 Rankings):

The Hockey Saskatchewan Provincial Championship Playoffs actually begin with series involving teams from neighboring towns in January and wind down with champions named by the end of March. The tournament has been a long-standing hockey tradition in the province, with approximately 250 teams participating each year in categories ranging from U13 D to Senior A.

Teams battle traditional rivals and develop new rivalries on their path and in their quest to claim coveted provincial championship banners. The event is powered by the hard work by players, coaches, executive and volunteers across the province throughout the year.

At the U18 AAA boys and girls levels, as well as in the Tier 1 U18, U15 and AA boys’ and girls’ leagues and at the U13 Tier 1 AA boys level, champions are determined by league playoffs that are set up to comply with the provincial playoff guidelines established by Hockey Saskatchewan.

The following leagues determine their own champions, who in turn are considered provincial champions at those levels:

Hockey Saskatchewan operates provincial championship tournaments at all other age and skill levels, including 18U, 15U and 13U Tier 2 AA events.

The SMAAAHL U18 boys' playoffs are underway and down to the final championship paring. Western Canada's 32nd-ranked Warman Wildcats will be taking on the 25-ranked Notre Dame Hounds in a best-of-five series for the league and provincial title.

The SAAHL U18 AA boys’ championship series is underway, featuring the Saskatchewan's No. 21 West Central Wheat Kings and the No. 18 Regina Vics. The best-of-three series is tied at 1, with the rubber match set for April 12 at 9 p.m. ET. West Central won the opener, 4-1, with Regina rebounding to take Game 2, 3-2.

The SAAHL U15 AA boys’ playoffs conclued recently, with with Saskatchewan's second-ranked Saskatoon Bandits knocking off the No. 6 Swift Current Broncos, two games to none. The second game was a 2-1 double-overtime thriller.

The Swift Current Broncos, ranked fourth in Western Canada, needed triple overtime in the opener and all three games of their best-of-three championship series against the No. 7 Tisdale Ramblers to capture the Saskatchewan provicial U13 title. After opening the series with a 5-4 extra-time win, the Broncos dropped Game 2, 6-4, before rallying to claim the deciding contest by a 5-2 margin.

The SFU18AAAHL U18 girls’ playoffs concluded recently, with Canada's fourth-ranked Notre Dame Houds claiming the championhip by defeating the No. 2 Regina Rebels, three games to one, in the deciding series. The teams split a pair of overtime games, with Regina winning in extra time, 4-3, to take Game 1 and the Hounds clinching the titl in Game 4 with a 1-0 overtime thriller.

The 10th-ranked Saskatoon Comet Impact defeated the No. 29 Regina Rebels, two games to none, to claim the Saskatchewan Provincial Championship. Saskatoon outscored the Rebels by a combined 10-1 in the two-game sweep.

Each year, 25 or more communities across Manitoba host provincial championship tournaments in which approximately 250 teams and more than 4,000 players compete to be crowned champions of Manitoba. Tournaments are held for boys and girls in U11 through U18 age groups.

Younger age groups began competing as early as February, with play wrapping up in the older, non-AAA brackets the weekend of March 11-13. Provincial champions at the 18U AAA levels for males and females are determined by the results of the Manitoba U18 AAA Hockey League (MU18HL) and Manitoba Female Hockey League (MFHL) playoffs.

In the MH18HL playoffs, the field is down to the the last two, with the best-of-five-game championship series scheduled to run from April 8 through April 23 if necessary. The championship series features the No. 12 Brandon Wheat Kings taking on Western Canada's 20th-ranked Winnipeg Wild. Brandon swept the 45th-ranked Parkland Rangers, three games to none, in one semifinal, with Winnipeg also sweeping the No. 22 Eastman Selects. The Wheat Kings opened the championship series with a pair of one-goal victories, 6-5 in overtime in Game 1 and 5-4 in Game 2.

The MFHL Playoffs concluded April 1 as the as Canada's 71st-ranked Westman Wildcats swept a best-of-five series against the No. 68 Winnipeg Ice. Westman outscored the Ice, 11-5, in the series to capture the Manitoba provincial championship. In the semfinals, the third-seeded Wildcats defeated the second-seeded Yellowhead Chiefs, 3-1, in a best-of-five series that concluded March 14. Winnipeg was an upset winner in the semfinals, knocking out the top-seeded Winnipeg Avros in five games. The best-of-five championship series began March 25.

Congratulations to the Brandon Wheat Kings for capturing the Manitoba U15 AAA championship March 13 in Carman, Manitoba, with a 6-3 victory over the Yellowhead Chiefs. Brandon is ranked 75th in Canada, while the Chiefs are 92nd nationally.