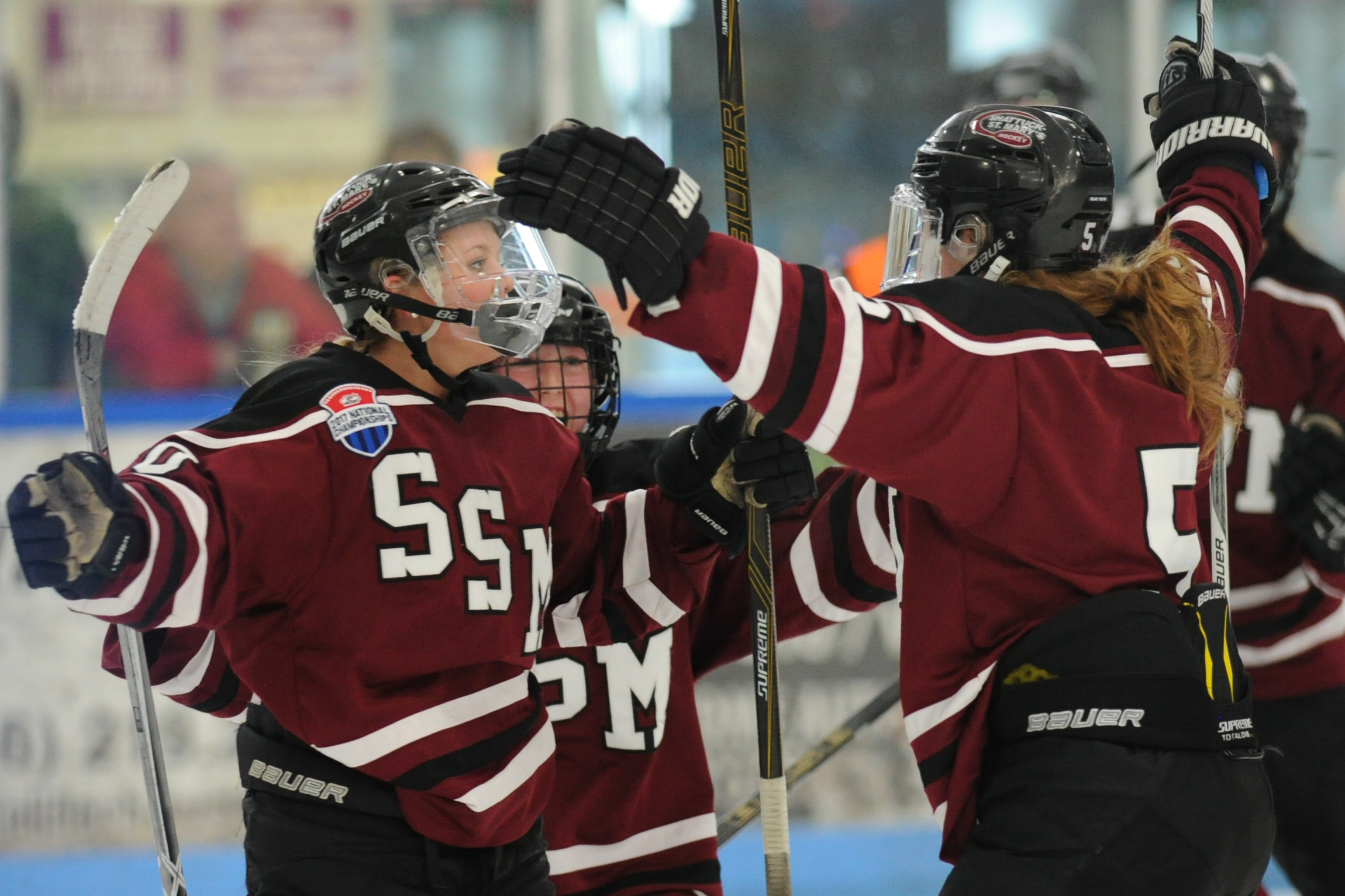 Approximately 40 of the top United States Girls youth hockey programs at the 14U, 16U and 19U levels come together just outside Washington, D.C., for this weekend’s Junior Women’s Hockey League Challenge Cup, and that’s where we go for our LiveBarn Week 21 Featured Game of the Week. The event started Friday and continues through Monday at Medstar Capitals Iceplex in Virginia and Rockville Ice Arena in Maryland.

Every 14U and 16U game can be watched live or on-demand at www.LiveBarn.com. Our Featured Game of the Week is a 16U matchup between No. 3 Shattuck-St. Mary’s and the 11th-ranked Philadelphia Jr. Flyers, and another of our Week 21 top games is a 19U tilt between No. 6 Shattuck and No. 8 North American Hockey Academy.

League playoffs are heating up around North America, and we take you to the Tier 1 Elite Hockey League Playoffs at the Super Rinks in Blaine, Minn, for a USA Boys showdown between the No. 12 Phoenix Jr. Coyotes and No.17 Colorado Thunderbirds. Our final Week 21 Game of the Week takes place at the North American Prospects Hockey League Playoffs in Michigan as the No. 10 USA Boys 18U Tier 1 Maine Nordiques take on overall third-ranked 18U NorthStar Christian Academy.

Fourteen of the top 16U teams in the nation come together this weekend near Washington, D.C., to compete in the Junior Women’s Hockey League Challenge Cup. This is one of the weekend’s marquee matchups as third-ranked Shattuck comes East for the first time this season. The Sabres brought a 38-10-2 record into the tournament, which opened play Friday. They had won eight consecutive games leading up to the event, outscoring their opponents, 49-9, in those outings and recording four shutouts. SSM had outscored its opponents, 196-86, on the season before Friday. The Sabres’ last loss was a 5-1 setback against No. 5 Little Caesars Jan. 23 that came after two victories over LC. They also took two of three from the No. 6 Chicago Mission right before that. Shattuck was 15-2 in its 17 outings leading up to the weekend. Philadelphia was 36-18-3 overall coming into the weekend and had outscored its opponents, 200-118. The Jr. Flyers split their previous two games, beating the No. 20 Gilmour Gladiators, 3-1, and falling to the seventh-ranked Bishop Kearney Selects Feb. 12. They were 4-1 in their previous five outings after splitting a pair of games vs. the No. 16 Pittsburgh Penguins Elite Jan. 29 and 30 and had posted a 10-2 record in their previous 12. That 12-game run was preceded by a 3-1 loss to No. 6 North American Hockey Academy.

Two teams that already have qualified for USA Hockey Nationals face off in what should give us a taste of what’s ahead when national champions are crowned in April. This is a rematch of two games that were played not long ago at the JWHL Minnesota showcase event, and NAHA skated away with 3-1 victories in both of those contests Jan. 28 and 29. Shattuck defeated No. 30 Culver Academy, 8-2, in its only outing since those games and brought a 27-14-6 record into the weekend. The Sabres had outscored their opponents, 149-100, and were 4-5 in their previous nine outings with the losses coming against NAHA, the No. 10 Bishop Kearney Selects and the No. 3 Chicago Mission. NAHA faced the top-ranked Canadian U22 team from Stanstead College heading into the JWHL Challenge, dropping a pair of tight games, 4-3 and 5-3, to fall to 44-14-6 on the season. Those setbacks left the Hawks holding a 208-108 scoring advantage over its opponents. NAHA saw its 14-game unbeaten streak (11-0-3) snapped by Stanstead. Prior to that, the Hawks’ previous loss came against the second-ranked Philadelphia Jr. Flyers, 4-1, Jan. 9. NAHA bounced back to tie the Jr. Flyers, 3-3, Jan. 15 and beat them, 3-2, Jan. 16.

The second- and third-place Tier 1 EHL teams faceoff in playoff action from the Super Rinks in Blaine as the Coyotes, 12-5-0-0 in league play, take on the T-Birds (10-5-0-2). Phoenix finished regular-season play a point behind the top-10 Cleveland Barons and two points in front of Colorado in the T1EHL standings. The Thunderbirds won the two previous meetings between these two teams by surprising 6-0 and 5-2 scores, so the Coyotes come to Minnesota set on revenge. Phoenix opened postseason play Friday with a 5-1 victory over the No. 27 Los Angeles Jr. Kings and was scheduled to play the 39th-ranked Chicago Fury Saturday morning. The Coyotes took a 29-22-2 record into that game and had oustscored their opponents, 198-133. Phoenix was 6-1 in its previous seven contests before facing the Fury. The Thunderbirds knocked off the Fury, 6-1, Friday to improve to 33-15-0 on the year. They took a 191-118 scoring advantage against their opponents into a Saturday-morning game vs. the Jr. Kings. Colorado also brought a four-game winning streak into that contest since falling to Los Angeles, 4-2, Jan. 14.

NorthStar, the first-place team in the T1 EHL Central Division with a 25-2-1 regular-season record, takes on the East Division’s third-place Maine Nordiques (8-8-0) as the second day of NAPHL postseason action heats up. NorthStar actually suffered an upset loss to the No. 12 18U AA Arizona Bobcats, 6-5 in overtime, Friday. The Knights also were scheduled to play the Ontario Jr. Reign Friday. Pending that result, NorthStar was 43-7-0 overall and had outscored its opponents, 277-94. Maine, which is ranked 16th in the 18U overall rankings and 10th among only Tier 1 teams, brought an overall record of 37-11-3 into the tournament and had outscored its opponents, 187-103. The Nordiques have made a steady climb up the rankings since Christmas, winning their last seven games heading into the NAPHL playoffs and going 13-1 in their previous 14 outings. NorthStar had won 15 straight coming into the weekend, dating to a 2-0 loss to Maine Dec. 18. They outscored their opponents, 80-25, during that run. That Nordiques victory marked the only meeting of the season between the two teams.