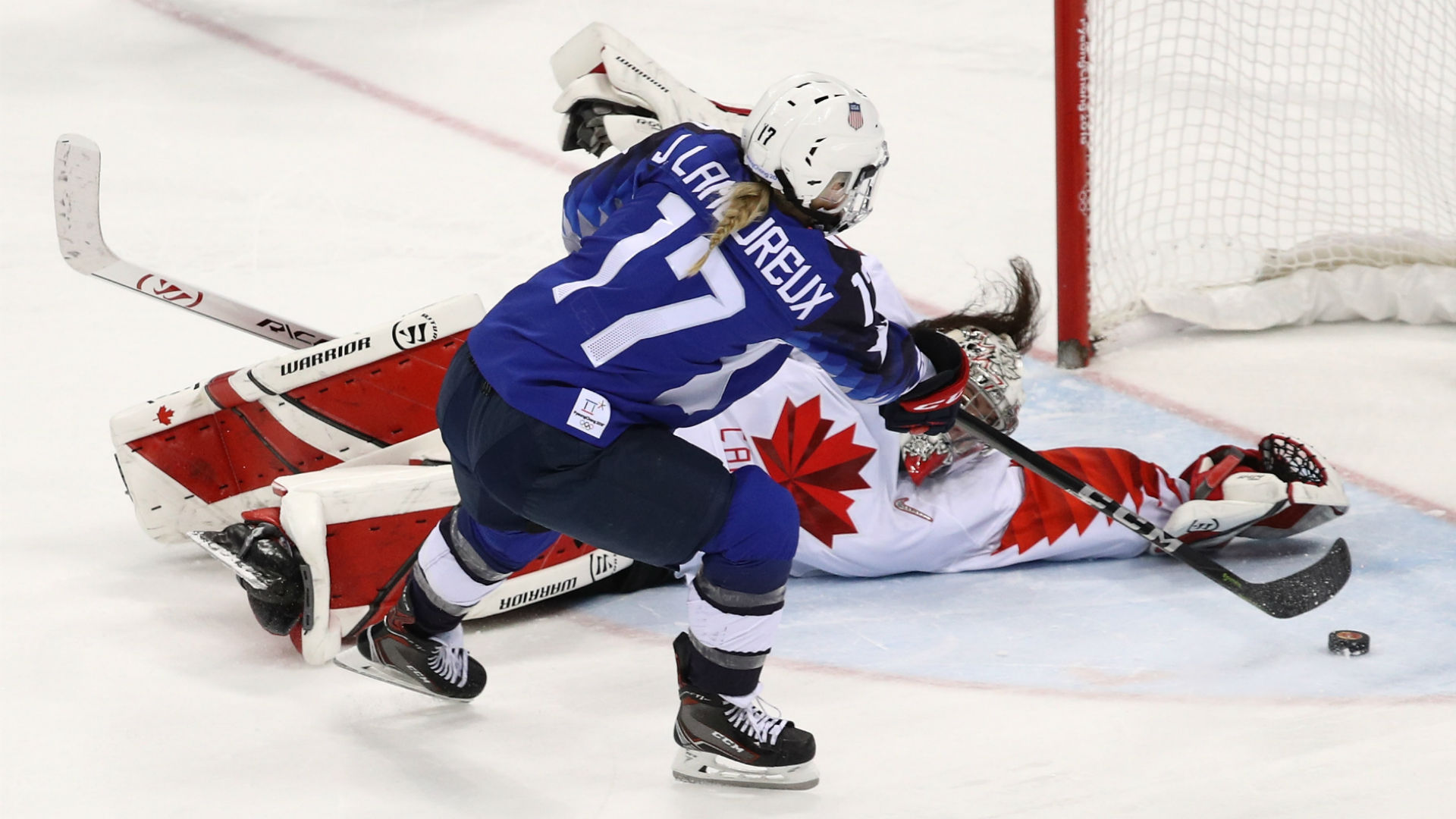 Hockey fans around the world were disappointed to hear the news not too long ago that the National Hockey League would not be sending its players to the 2022 Winter Olympics in Beijing because of the recent global surge in COVID cases. And while it’s true that some of the best hockey in the history of the sport – and some of the most exciting games ever contested – has been played during Olympic Games attended by the top men’s hockey players in the world, to those fans I have just one thing to say: Did you watch the Women’s World Championship in Calgary last summer?

Or how about the last Olympic women’s hockey gold-medal game in 2018, won in a shootout by the United States over Canada in South Korea? Or maybe any of last 12 contests between the two rival nations, eight of which have been decided by a single goal, with four of those needing overtime to determine the winner.

“Every time we play them, it's going to come down to a goal, to overtime. That’s why it’s the greatest rivalry in sports,” USA forward Amanda Kessel, who will be playing in her third Olympics in Beijing, said following another instant classic involving the two countries, a 3-2 overtime victory by Canada in last summer’s World Championship gold-medal game.

Apparently, this isn’t news to anyone who follows women’s hockey as soon-to-be four-time U.S. Olympian Hilary Knight said pretty much the same thing heading into the 2018 Olympics.

"The rivalry between the U.S. and Canada is one of the most beautiful rivalries in sport," she said. "The level of competition we bring, whether it’s in someone’s barn, an outdoor rink or a world stage, it doesn’t matter. It goes to show how much we respect one another in terms of being sheer dominant hockey teams. It’s always a great game, the fans get involved and it’s the game we live for."

What many followers of men’s hockey may not realize, though, is that the level of play in the women’s game is at an all-time high as some of the sport’s greatest veteran players and pioneers are joined by a crop of exciting, fast and skilled newcomers. That will be become readily apparent with the women’s hockey tournament taking center stage as one of the Olympics’ premier events with the NHL players staying home.

Most hockey fans have heard of players such as Knight, Kessel, Kendall Coyne Schofield and Brianna Decker of the United States as well as Canadian veteran superstars Marie-Philip Poulin, Melodie Daoust, Brianne Jenner and Renata Fast. But those who haven’t seen or heard about young Americans Abbey Roque, Grace Zumwinkle and Caroline Harvey or Canadian Sarah Fillier and her eight other teammates also making their Olympic debuts are in for a treat.

Then there are the stars from around the world who may not be household names yet but could be in the matter of a few short weeks.

Finland’s Jenni Hiirikoski is the world’s best defender and has been for many years. Swiss budding superstar Alina Muller took the international hockey world by storm as a 19-year-old at the 2018 Games and has 29 points in 19 outings for NCAA Division I Northeastern University. Czechia speedster Alena Mills had seven points in six games at the World Championship. Denmark’s Josefine Jakobsen was nearly a point-per-game player in 144 career college appearances for the University of North Dakota who also had seven points in seven games combined at Women’s Worlds and Olympic qualifying. And Japan’s Nana Fujimoto is the best goalie you’ve never heard of.

Those are just some of the top players many of us will get to know as the 2022 Olympic women’s hockey tournament unfolds starting Wednesday night (that’s right, tonight!) at 11:10 p.m. with host China taking on Czechia in a Group B matchup, while Canada faces Switzerland in a Group A showdown. Both games, as well as all of the other women's hockey games, can be seen live on Peacock and NBCOlympics.com in the U.S. and on CBC Streaming in Canada.

Despite winning the most recent World Championship gold medal and going 3-0 vs. Finland and 4-2 vs. the United States in pre-tournament exhibitions, Canada enters the Olympics ranked second in the world, according to the International Ice Hockey Federation. The U.S. still holds down the top spot because the rankings are calculated based on overall performance over the last four years. Finland is ranked third, followed by Russia and Switzerland.

Those are the five teams likely to compete for medals in Beijing, with Canada, the U.S. and Finland the strong favorites to finish among the top three. Switzerland, which played most of the tournament without Muller and still managed to upset Russia before falling to the Finns in the bronze-medal game at Women’s Worlds, should be at full strength and could also push for a medal.

In recent years, Finland not only has had the best defender in the world, but also the goaltender many felt was the world’s best in Noora Raty. She did not attend the World Championship and won’t be in Beijing, however. The Finns have transitioned to 24-year-old netminder Anni Keisala and haven’t missed a beat. Keisala made more saves than any goaltender in the Finns’ pool in Calgary, posting a 1.49 goals-against average and a .951 save percentage. Finland is strong and deep up front, too, led by forward Michelle Karvinen, who notched six points in seven WWC contests. The Finns were a controversial overturned overtime goal away from beating the Americans to win the gold at the 2019 World Championship after upsetting Canada in the seimfinals.

None of the Pool B teams figure to compete for gold or silver, but Czechia plays a fast, attacking style led by Mills and the versatile Dominika Laskova, who has 30 points in 65 career games for NCAA Division I Merrimack. The Czechs pushed Finland to the brink before falling by a 1-0 score in the quarterfinals at Women’s Worlds. Rebuilding Sweden returns to the international stage after being relegated from the World Championship top division in 2019. The Swedes are not expected to contend in Beijing.

While we are guaranteed at least one more epic U.S.-Canada tilt when the two teams face off Feb. 7 at 11:10 p.m. in the preliminary round, the smart money says that the two international powers will match up in yet another gold-medal classic Feb. 16 at 11:10 p.m. They have met in five-of-six Olympic gold-medal games all time and 19 of 20 World Championship gold-medal contests. While the U.S. has appeared in all 20 WWC first-place games, Canada has competed in all six Olympic gold-medal contests.

The U.S. still seems to be adjusting to the retirement of some of its most-decorated players since the 2018 Games. Monique and Jocelyne Lamoureaux, Meghan Duggan, Gigi Marvin and Kacey Bellamy all have retired since Jocelyne Lamoureaux’s infamous shootout game-winner in South Korea.

In their absence, the Americans turn to five current college players, including the 19-year-old Harvey, who pushed back her freshman year at Wisconsin to prepare for the Olympics. The U.S. has 15 players with Olympic experience on its 23-person roster, including 13 who played in 2018. Of course, veterans like Knight, the program’s all-time leading World Championship scorer; Coyne Schofield, Kessel and Decker still rank among the top players in the world even playing into their 30s.

For Canada, only two of seven defensemen and one of three goaltenders have Olympic experience, but that didn’t seem to slow the group at all in Calgary. The top defensive pairing of Fast and elder stateswoman Jocelyne Larocque compares favorably with any in the world, and whenever your bottom-six forwards include names like Sarah Nurse, Spooner and Jamie Lee Rattray, who scored a big goal in the gold-medal game at Worlds, you’ve got an incredibly deep group up front.

Fillier, who has been one of the NCAA’s top forwards since her first game at Princeton University, provides an offensive spark to support Poulin, one of the sport’s all-time best clutch performers, Daoust, Jenner and Rebecca Johnston. Poulin scored the overtime gold-medal-winning goal in Calgary and proceeded to score two more OT winners against the U.S. during the six-game pre-Olympic tour that concluded in December. Daoust was named MVP of the World Championship after exploding for 12 points in seven games.

Canada returns 10 forwards with Olympic experience up front to go along with three Olympic rookies, each of whom has World Championship experience.

When two bitter rivals who compete on a regular basis are on a crash course to meet two more times in a 10-day span with an Olympic gold-medal on the line, players and coaches will search for any source of motivation they can find. That’s especially true when two teams are separated by such a small margin and when the tiniest of mistakes can cost one team a gold medal.

This is one of those rare occasions when both teams can play the underdog card. Even though Canada has won six of eight meetings between the two teams during the last calendar year, five of those contests have been decided by a single goal and four have gone to overtime. If you throw out Canada’s 5-1 preliminary-round victory in Calgary, the goal differential in the other seven meetings has been plus-two in favor of the Canadians.

“Our business isn’t finished until we come back with a gold medal,” the USA’s Decker told the Associated Press. “It’s a sad thing, but sometimes you’ve got to lose to get a little bit more out of your team and yourself.”

Meanwhile, Canada still is ranked second in the world behind the Americans despite the recent success against them, and that gold-medal loss in South Korea is a vivid and painful memory. In addition, the U.S. has captured nine of the past 11 WWC golds.

The Canadians still feel they have a lot to prove, especially on the world’s biggest athletic stage.

“It would mean the world {to reclaim the Olympic gold},” Poulin, who will be playing in her fourth Olympics, told CBC. “Canada holds its hockey players to a high standard.”