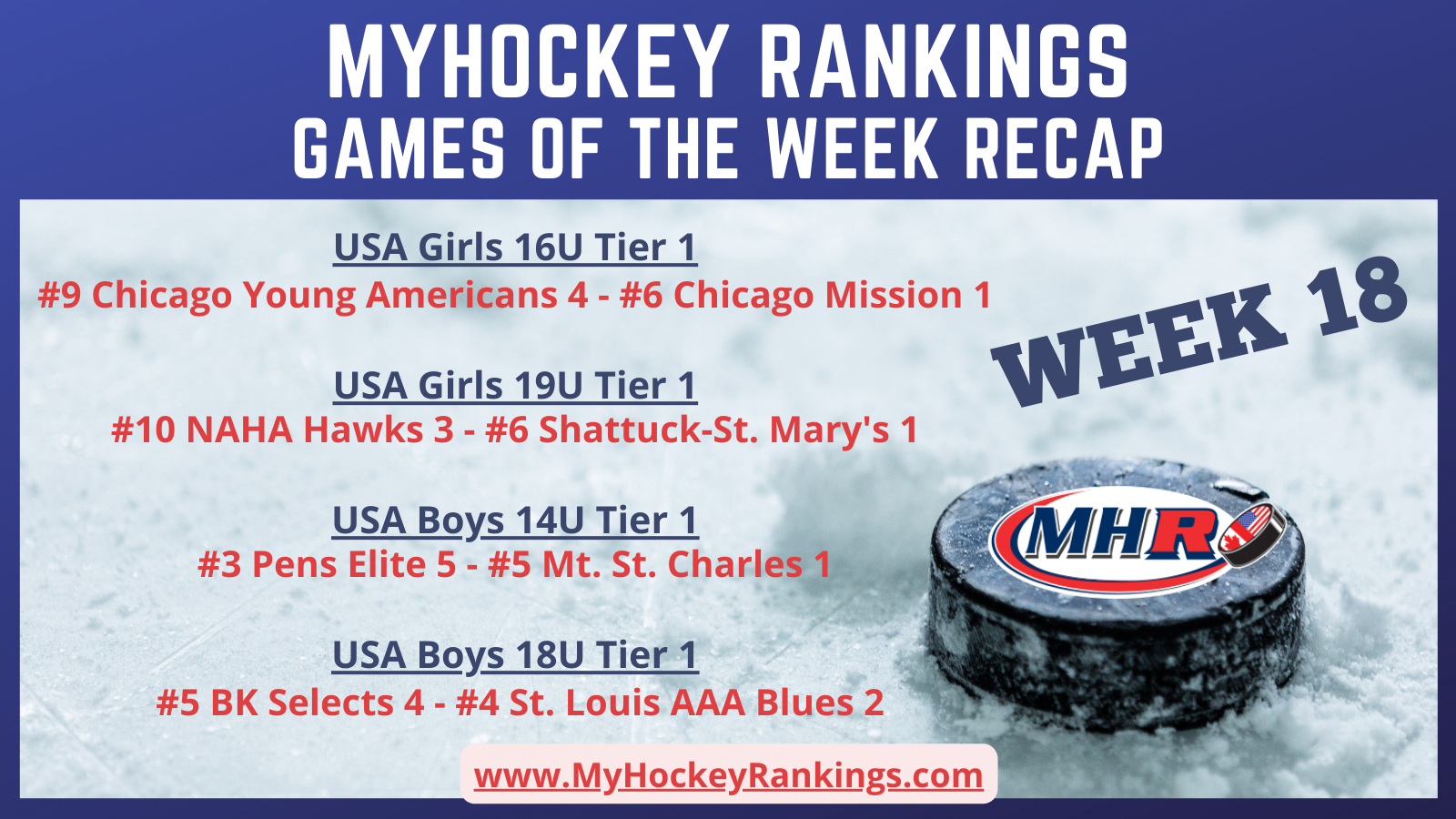 That’s right, after three upsets in Week 17, our Week 18 slate featured more of the same as three of this week’s four highlighted contests ended up with the lower-ranked teams winning. We can qualify that somewhat, however, as one of those teams bounced back to earn a tie against the team it lost to the following day and another took two out of three games from its lower-ranked opponent in a weekend series.

It all just shows how evenly matched the top-ranked teams are in most age groups. Read about it all below as we recap each of our Week 18 Games of the Week.

And please feel free to send us videos from your games that we can consider for our Plays of the Week feature. Send them to us on Twitter, tagging @MYHockeyRanking and using the hashtag #MHRPOW. We also are always happy to retweet game updates, scores or anything else about your programs you’d like to send our way.

Video highlights of our Week 18 Games of the Week will be available by CLICKING HERE once they are posted.

This was the final game of the annual “Pink the Rink” fundraiser that the Mission host every year, with this year’s event raising nearly $72,000 for the American Cancer Society. Earlier in the day, the clubs faced off at the 12U 14U and 19U levels as well, and each contest featured two highly ranked teams. CYA scored the game’s first three goals in this one, taking a 3-0 lead into the final period and finally closing out a 4-1 victory with a goal in the waning moments. The Young Americans got on the board first with 9:23 left in the first on a rebound goal after a crazy scramble in front. They later scored on what appeared to be a centering pass that banked in off someone in front for a 2-0 CYA lead after one. A beautiful high-tip play off a shot from the point that was deflected in the high slot extended the Young Americans’ lead to 3-0 before the Mission’s Lindsey Smolen did all the work on her own to cut the margin to 3-1 with 9:17 remaining in the contest. Smolen won the faceoff forward to herself then patiently deked the goalie before finishing. CYA sealed the victory with 1:34 left on a breakaway goal. The two teams also met on Young American home ice Sunday and skated to a 1-1 tie. CYA concluded the weekend at 31-12-2, while the Mission are now 27-13-4.

In a rematch between top-10 foes at the Junior Women’s Hockey League weekend event at the University of Minnesota, NAHA followed up a 4-1 victory Friday with a 3-1 win Saturday. Audrey Knapp scored twice in both contests for the Hawks, with Beth Swinson also tallying Saturday and Allie Cuellar earning the win in goal. Sylvia Bojarski and Georgia Schiff scored the other two goals Friday. With the victories, NAHA improved to 39-12-5 on the season and increased its scoring advantage against all opponents to 180-89. This was the fourth meeting of the teams, and NAHA holds a 3-0-1 advantage in the season series. The Hawks skated to a 2-1 shootout win Oct. 21, and the teams played to a 1-1 tie Dec. 11. NAHA is 11-1-3 in its last 14 contests, with victories over the No. 3 Philadelphia Jr. Flyers and No. 8 Bishop Kearney Selects during that run. Shattuck is 25-14-6 and has outscored its foes 138-99. The Sabres are 2-5-0 in their last seven outings, but Shattuck’s recent skid has come on the heels of an 11-2-3 stretch.

It was a big weekend of NorthEast Pack matchups in New Jersey. Pens Elite ran away with this one but fell to the No. 10 Bishop Kearney Selects Sunday and beat the No. 17 New Jersey Rockets, 3-1, in their other contests to conclude league play with a 7-3-1 record. They are 36-12-2 overall and have outscored their opponents, 202-87. Mount St. Charles tied the Rockets and beat the Selects, 3-2, to wind up 8-1-1 in league play. MSC is 32-9-4 overall and has outscored its opponents 228-109. Ryan Howe opened the scoring for Pittsburgh in this game with 8:25 left in the first period only to see MSC’s Dominic Somma tie it up 3:25 later. Pens Elite would score the final four goals of the game, however, with Mark Evans tallying twice and John Mooney and Charlie Trethewey each netting single goals. Evans finished with two goals and an assist, while Mooney added a goal and two helpers and Brian Woods handed out a pair of assists to make a winner of Jake Shingles (19 saves) in goal. Steven Luciano had 24 saves for Mount St. Charles.

The Selects rallied to pull off the 4-2 victory at “The Barn,” Cantene’s outdoor ice surface, after dropping two previous weekend matchups against the Blues by scores of 2-1 and 4-1. Those results left St. Louis with a 32-7-0 record for the season and a scoring advantage of 176-78 vs. all opponents. BK is 35-14-4 and has outscored its foes, 206-107. Jayden Dyke recorded a goal and assist to lead the Knights to finish the weekend with four points. Charlie Major handed out three helpers for Bishop Kearney, with Hans Ulveben contributing a goal and an assist. Netminders Steven Reganato and Jack Fialkoff split time between the pipes.