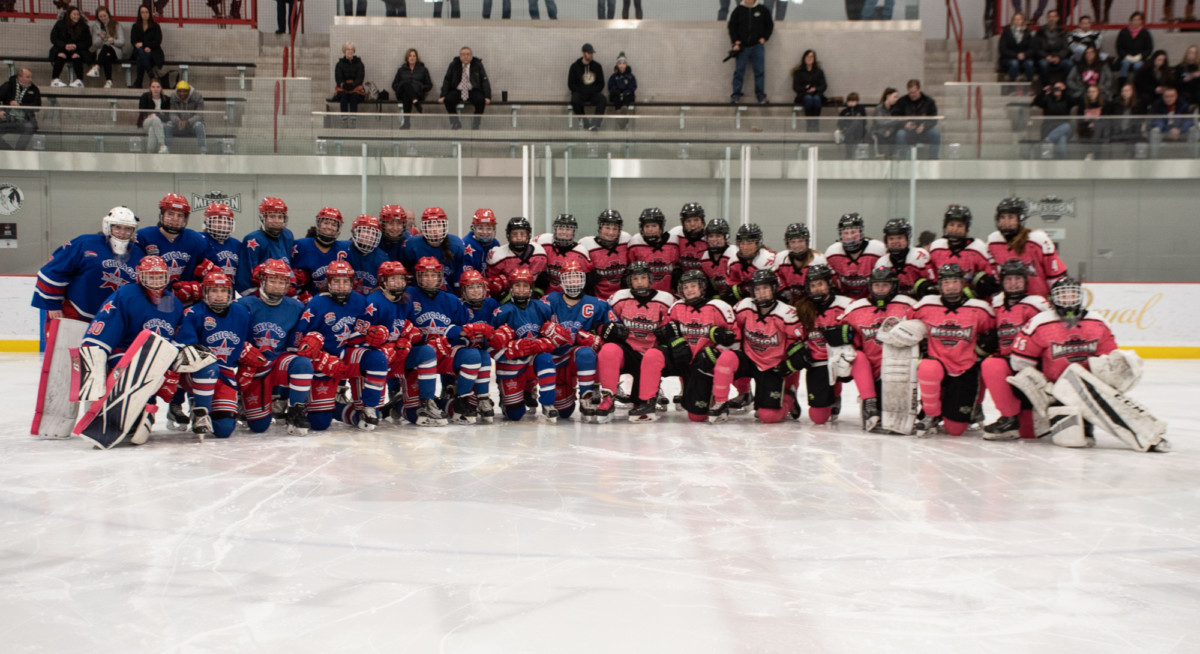 Week 18 MHR Games of the Week

The crazy weather crushing the Northeast right now has shut hockey down there this weekend. Too many schedule changes, postponed games and cancellations to keep track of. So, this week we turn to the rest of the United States for our MYHockeyRankings Week 18 Games of the Week and a nice mix of Tier 1 Boys and Girls action from around the country.

Our LiveBarn Featured Game of the Week is a special one that is part of a special day of hockey, featuring girls’ games at the 12U, 14U, 16U and 19U levels between the Chicago Mission and Chicago Young Americans.

These games are part of “Pink at the Rink” to raise money for the American Cancer Society, and action gets underway Saturday at 11:20 a.m. Eastern from Fifth Third Rink in Chicago with a matchup of top-8 U12 teams. The clubs’ 19U squads, with the Mission ranked second and CYA 14th, face off at 12:50, followed by the second-ranked 14U Mission vs. 29th-ranked CYA at 2:20. Our featured game between the sixth-ranked 16U Mission and No. 9 CYA gets underway at 4 p.m. Eastern.

Unless the stream is blacked out for some reason, each of these games can be seen on LiveBarn.

Our other USA Girls Game of the Week is a 19U matchup of top-10 rivals from the Junior Women’s Hockey League (JWHL) weekend being held at the University of Minnesota. Games are being played all day at U of M’s Ridder Arena, but the top matchup pits sixth-ranked Shattuck-St. Mary’s against No. 10 North American Hockey Academy in a rematch of a game won by NAHA Friday.

For our two USA Boys top matchups we have a pair top-five of NorthEast Pack 14U Rivals battling in New Jersey as third-ranked Pittsburgh Penguins Elite takes on No. 5 Mount St. Charles, while in 18U action we also have the No. 3 St. Louis AAA Blues facing the fifth-ranked Bishop Kearney Selects in Missouri. The 14U tilt can be seen on LiveBarn.

The finale of the Mission and CYA’s “Pink the Rink” American Cancer Society fundraising event features two top-10 Windy City rivals. There will be three other top USA Girls Tier 1 matchups in the 12U, 19U and 14U age groups preceding this one. The Mission bring a 27-12-4 record into the contest, and they hold a 120-72 scoring advantage over their opponents. Chicago has won three straight games, but is 6-4-0 in its last 10, with three of those losses coming against No. 3 Shattuck-St. Mary’s and the other vs. No. 14 Belle Tire. The Mission also beat Shattuck, 3-1, Jan. 16. Prior to dropping those four recent games, the Mission had opened their season by going 21-8-4. They posted a 12-1-2 record from Sept. 5 through Oct. 22 before falling to No. 12 North American Hockey Academy. The Mission and CYA met once previously, on Sept. 26, with Chicago earning a 3-2 overtime victory. CYA is 30-12-1 overall and has outscored its opponents, 171-67. They dropped their most recent outing, 3-1, to the No. 11 Philadelphia Jr. Flyers Jan. 17, and are 1-2-0 in their last three and are 6-5-0 in their last 11 outings after opening the campaign by going 24-7-1. CYA owns victories against No. 3 Shattuck, No. 7 Bishop Kearney Selects and No. 8 Minnesota Northern Elite.

It’s a JWHL rematch of top-10 foes after NAHA skated to a 4-1 victory Friday as part of the league’s weekend of games at the University of Minnesota. Audrey Knapp scored twice for the Hawks in the win, with Sylvia Bojarski and Georgia Schiff also tallying. With the win, NAHA improved to 37-12-5 overall and increased its scoring advantage against all opponents to 177-88. That contest marked the third meeting of the teams this year and improved NAHA’s record in the season series to 2-0-1. NAHA skated to a 2-1 shootout win Oct. 21, and the teams played to a 1-1 tie Dec. 11. The Hawks are 10-1-3 in their last 13 contests, with victories over the No. 3 Philadelphia Jr. Flyers and No. 8 Bishop Kearney Selects during that run. Shattuck is 25-13-6 and has outscored its foes 137-96. The Sabres fell to the No. 8 Selects in the game prior to Friday’s setback and are 2-4-0 in their last six outings. The other two losses came against the second-ranked Chicago Mission. Shattuck’s recent skid came on the heels of an 11-2-3 stretch.

A huge top-five 14U matchup in the NorthEast Pack highlights a weekend of league play in New Jersey. By the time these two teams meet, they each will have played earlier in the day, with Mount St. Charles taking on tenth-ranked Bishop Kearney Selects and Pens Elite meeting the No. 17 New Jersey Rockets. Pittsburgh entered the weekend 5-1-1-1 in league play, placing them second with 12 points – two behind MSC (7-0-0-0). Overall, Pens Elite entered the weekend 34-11-2 and having outscored its opponents by a massive 192-81. They are allowing just 1.72 goals per game and have 16 shutout victories. MSC entered the weekend at 31-8-3 and holding a 221-99 scoring advantage. Conversely, they are averaging 5.4 goals per contest in what promises to be a matchup of high-powered offense vs. great defense. This will be the fifth time these two teams have met this season. They have split the first two contests, with Pens Elite winning, 4-0 and 3-2 Sept. 24-25, and Mount St. Charles skating to a pair of 4-3 victories, Nov. 20 in overtime and Dec. 10. John Mooney leads Pittsburgh and the 14U league in scoring with 11 goals and 6 assists in 8 games. MSC is led by Liam Kilfoil, who is third in the league with 8-7-15, and Conrad Fondrk, who has 7-6-13.

This is the rubber game in a three-game weekend series between a pair of 18U USA Boys top-five powerhouses. Surging St. Louis opened the series Friday in Maryland Heights, Mo, with a tight 2-1 victory for its 12th win in the last 13 outings, improving to 31-6-0 on the year. BK fell to 34-13-4 as its 14-game unbeaten streak was snapped (12-0-2). The teams also were scheduled to play Saturday morning. The Blues have outscored their opponents, 170-73, compared to 201-101 for the Selects. St. Louis is allowing fewer than 2 goals per game and has held 18 opponents to 0 or 1 goal. Meanwhile, BK scores nearly 4 goals per outing. These teams are meeting for the first time this season. St. Louis’ lone loss during its current hot streak was a 6-1 decision against the No. 16 Nashville Jr. Predators Jan. 17. That setback snapped a 10-game winning streak that included victories against the No. 18 Ohio Blue Jackets and three other top-40 foes. The Selects’ last loss before Friday was a 4-3 decision against the No. 6 Long Island Gulls Dec. 4. They had beaten the Gulls twice just prior to that contest and also knocked off No. 8 Pens Elite and No. 11 Northwood School around the same time. They are 17-1-2 in their last 20 games.