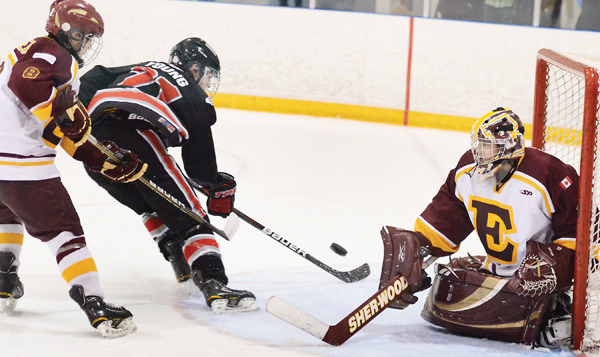 Every now and then we get lucky and pick some incredible games for our Games of the Week Feature. Week 17 was one of those weeks.

Three of our four games resulted in minor upsets, at least according to the rankings, and two of them were high-scoring, one-goal affairs, with one of those being decided in overtime.

Unforunately, our LiveBarn Featured Game of the Week was held in a rink that has LiveBarn but the cameras were blacked out during the time that our Western Canada U13 AAA Boys game was being contested. So, as of now, we will only have a written recap and no video highlight package for this week's games. If anyone has video from any of our games they can share with us, though, we'd be happy to put one together.

Top-ranked North Shore Winter Club knocked off No. 4 Burnaby Winter Club, 8-2, in the featured contest and then fell to Semiahmoo the following day in a matchup of the top-two U13 teams in Western Canada by a somewhat surprising 5-0 margin. And in Canada Girls U22 action, the fourth-ranked Mississauga Hurricanes bounced back from Saturday's 4-2 PWHL loss against the Oakville Hornets to beat the Hornets in a rematch, 4-1, Sunday.

Once again, if you have video footage or scoring information from any of this week's featured matchups, please feel free to send that to us as well for use in our Weekend Wrap feature. The more game details we have for our write-ups and video highlights the better.

North Shore apparently used up all of its goals for the weekend Saturday, skating away with an impressive 8-2 victory. Sunday's game against No. 2 Semiahmoo was a different story, however, as NSWC dropped a 5-0 decision. For North Shore, Sunday's loss was just their third of the year as they fell to 21-3-0. The setback also ended a 10-game wining streak. NSWC previously had only lost to Semiahmoo, which now owns a 3-0 season-series lead. North Shore has outscored its opponents, 216-51, for the season. Burnaby, which fell to Semiahmoo, 6-4, the previous week, bounced back to beat the No. 37 Vancouver Thunderbirds, 5-1, Sunday to improve to 23-7-1 on the season. BWC has outscored its opponents, 195-105. Meanwhile, Semiahmoo, which is hoping to leapfrog North Shore and move into the top spot in the Western Canada rankings at some point, beat the Chilliwack Bruins, 8-1, Saturday and is now 31-1-0 on the year. The Bruins have outscored their opponents, 247-46, and their only loss was a 4-2 decision against the No. 5 Abbotsford Hawks Nov. 28. They have won 12 straight since that defeat, recording six shutouts in the process.

The fifth-place Hornets of the PWHL U22 Central West Division inched closer to the first-place Hurricanes in the standings, but Mississauga rebounded for a 4-1 victory Sunday to maintain its distance. Oakville is now 4-5-2 in league play and just one point out of fourth and three points out of of third. Overall, the Hurricanes improved to 23-6-4 overall with Sunday's win and have outscored their opponents, 99-46. The Hornets are 13-11-2 with a 72-52 scoring advantage over their foes. Mississuaga jumped to a 1-0 lead in Saturday's game as Taylor Delahey converted with 13:27 left in the opening frame, with assists going to Ashley Delahey and Emma McCarthy. Oakville responded with three straight second-period markers from Ellie Markakis, Wallis York and Stephanie Stainton. York assisted on two of the scores, with Stainton also adding a pair of helpers. The Hornets' Kaitlin Texeira answered to halt the momentum with 2:18 left in the second period, but Stainton buried the insurance goal on the power play with 13:19 left in the game.

A thrilla in Alberta! In a battle of Alberta's top two U18 AAA and Canadian Sport School Hockey League (CSSHL) teams, Edge School scored a pair of goals in the opening five minutes of the third period - with Charlie Elick and Nick Johnson tallying - to take a 6-5 lead only to see the Xtreme's Brandin Tonchin tie it with 7:34 to play in regulation. Elick turned out to be the hero, though, netting his third of the night 2:59 into overtime to lift Edge to the win. Ayden Peters and Hunter Sawka assisted on the game-winner, and Noah Davis made 24 saves to pick up the win over Alexander Scheiwiller. Peters, Nick Johnson and Shayne Tibbles paced the Edge School offensive atack with a goal an an assist each, while Dylan Kinch and Keifer Miller contributed a pair of helpers. Lucas Schuett dented the twine twice for NAX, with Zackary Shantz adding a goal and two assists, Reid Varkonyi picking up three asists and Mason Hartley tallying a goal and an assist. Edge School now has a 21-4-1 CSSHL record with 3 shootout wins, good for 60 points and a five-point lead over NAX in the U18 Prep standings. Northern Alberta is 18-2-1 with a shooout win and a pair of shootout losses, so NAX does have three games in hand. In all games, the Xtreme are 22-5-0, while Edge is 25-9-0.

Another Alberta thriller, this time from the Alberta Elite Hockey League (AEHL). These two teams traded four goals in the first 8:12 of the third period, but managed nothing else after that as the Oilers pulled within two points of the Hurricanes in the AEHL standings thanks to their 6-5 victory. Kole Duquette capped the scoring at the 8:12 mark with his second of the game assisted by Brayden Schwartz and Luc Trevors. That turned out to be the game-winner for Okotoks, which opened and closed the scoring. The Oilers scored first and netted three tallies in a row overlapping the first two periods to take what appeared to be a commanding 4-1 lead only to allow Lethbridge to score four of the next five to even the score 7:36 into the final frame. It was just 36 seconds later, however, when Duquette became the hero. He finished the game with two goals and an assist, while Schwartz led the way with two goals and three helpers. Blake Svenson and Trevors added single goals. Five different players scored goals for the Hurricanes, with Dayton Tailfeathers notching a goal and three assists, Pul VandenElzen dishing out two assists and Connor Chapman contributing a goal and an assist. Connor White turned asise 32 Lethbridge shots to earn the victory in goal. Fourth-place Lethbridge was hoping to pull within two points of Okotoks in the AEHL South Division standings but now finds itself four points back and tied with the Souh East Tigers, who are 13-10-0 with 26 points. The Oilers are 14-8-2 in league play. The Hurricanes have a game in hand on the Oilers and three on the Tigers. The Calgary Royals lead the division by one point over the Calgary NWCAA Flames and 13 over Okotoks.