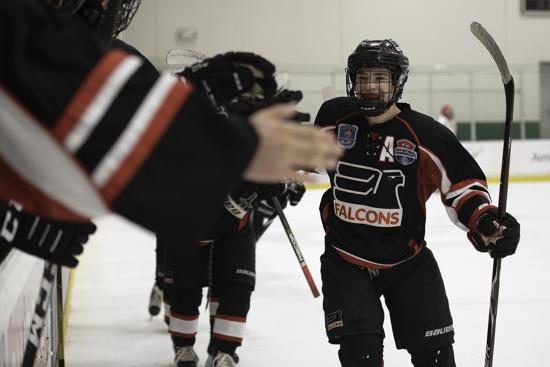 Martin Luther King Day Weekend has become one of the busiest hockey weekends of the year in the United States. It's a weekend during which many teams travel outside their leagues to partcipate in one of the various tournaments and showcases scheduled to take place all over the country.

The good news is that we have plenty of games to choose from for our Week 16 Games of the Week, but the bad news is that there are many more great matchups out there that we just don't have the time or space to include. With so many games to choose from, this weekend presents us with an opportunity to higlight some teams, age groups and levels that normally might get overlooked.

For our Featured Game of the Week, which as usual can be seen live or on-demand on LiveBarn, we head to the Pennsylvania for the Mid-Atlantic Showcase Series Winter Showcase, which features some of the top U.S. Tier 2 Boys teams in the 14U, 15U and 16U age groups. The 14U AA grouping boasts five of the nation's top-10 teams, including the top-ranked Tampa Bulls, the No. 3 Kensington Valley Rebels, the No. 4 Chicago Bulldogs, the No. 9 Protec Ducks and the No. 10 Allegheny Badgers. There will be six games in the 14U age group in which top-10 teams will face off, including our featured game, the KV Rebels vs. the Tampa Bulls, on Sunday.

The full tournament scheudule can be found by CLICKING HERE, and all of the games in the showcase can be seen on LiveBarn.

One of our other Week 16 Games of the Week will be a special outdoor "Winter Classic" matchup from the Winter Club of Lake Forest in Illinois Saturday. That game pairs two of the nation's top 2009 birthyear U.S. Boys AAA teams as the third-ranked Dallas Stars Elite take on the top-ranked Chicago Reapers. Our other two top Week 16 matchups are from the North American Prospects Hockey League (NAPHL) 14U and 16U playoffs in Michigan. Those games can be seen on Hockey TV. You can find the complete NAPHL Playoff schedule for all age groups by CLICKING HERE.

These two teams meet in their final preliminary-round game of the Mid-Atlantic Showcase Series Winter Showcase outside of Philadelphia. Before this game takes place, Tampa will have played three games, including matchups with the 10th-ranked Allegheny Badgers and the No. 35 Reston Raiders, while the Rebels will have faced Reston and the ninth-ranked Protec Ducks among its three showcase opponents. The Bulls enter the weekend with a record of 29-4-3 and having outscored their opponents, 172-43. They have allowed just 1.19 goals per game, holding 25 opponents to 1 or 0 goals while recording 15 shutous. In 13 contests against AAA teams, Tampa has posted an impressive 8-4-1 record. The Bulls lost their most recent game, 3-2 in overtime vs. the AAA Nashville Jr. Predators, and were 20-3-2 in their previous 25 outings leading up to the showcase. Kensington Valley entered the weekend with a record of 25-9-7 and a holding a similarly impressive 149-75 scoring advantage over its opponents. The Rebels brought a 14-game unbeaten streak (11-0-3) into the weekend dating to a 3-2 loss to the No. 14 Kensington Valley Warriors Nov. 23. They also have enjoyed their share of success against Tier 1 teams, posing a 5-4-1 record in 10 games vs. AAA foes.

The Reapers and Stars meet for the second time this season in a very special setting. The two teams will face off outdoors in a Winter Classic-style game at the Winter Club of Lake Forest outside of Chicago. The Reapers, who beat Dallas, 6-4, Nov. 12, bring an impressive 36-6-1 record into the contest, having surrendered just 76 goals, or 1.77 per game, while scoring 227. They actually dropped their last outing, 5-4, to the No. 16 Buffalo Jr. Sabres Dec. 19, snapping a four-game winning streak and a run in which they went 8-2-1. Chicago has given up more than 2 goals just 13 times in 43 contest and has held 25 opponents to 1 or 0 goals. The Reapers have earned victories against eight of the nation's top-15 teams. Dallas is 38-9-1 on the year and holds a 311-114 scoring advantage over its opponents. The Stars are averaging 6.47 goals per game and skated to a 3-all tie vs. the 14th-ranked Windy City Storm as part of their visit to Chicago Friday. They are 5-1-1 since their Nov. 12 loss to the Reapers. Dallas opened the year by going 28-4-0 before going 10-5-1 in its last 16 outings. The Stars have 10 wins and a tie vs. teams ranked in the top 15.

A pair of Chicago AA rivals travel to Michigan to meet in the NAPHL Playoffs. Both teams enter the contest with 2-0 playoff records after having defeated the Gurnee Vipers and Portland Jr. Winterhawks Friday. With the victories, the Blues improved to 33-10-1 while the Hawks are now 23-8-2. The Blues have outscored their opponents, 187-79, while the Hawks hold a 143-69 scoring advantage in their games. These two teams met once previously, with the Hawks skating to an exciting 2-1 overtime victory Nov. 12. The Blues have won five straight games since a pair of losses Jan. 2 and 8 that snapped a nine-game unbeaten streak. The Hawks dropped their most recent outing, 3-1, to the Chicago Bulldogs Jan. 9 and have lost three of their past five games. That short skid halted a nine-game winning streak.

The NAPHL Playoffs continue Saturday as the Tigers and Falcons both enter this contest having won their first games on Friday. Texas knocked off the Orland Park Vikings, 3-2, while Highland Park handled the Arizona Hockey Union, 7-2. The Tigers improved to 33-6-2 with their victory and have outsocred their opponents, 219-81. Highland Park is now 20-5-1 and holds a 109-57 scoring advantage vs. its foes. These two teams met on Oct. 17, with the Falcons earning a 2-1 victory. Texas went 1-3 vs. four AAA teams Nov. 5-7 but has gone 9-1 since then, with the only loss coming against the Chicago Jets. The Tigers outscored their opponents, 62-16, in that span and held five of those opponents to 0 or 1 goal. Highland Park fell to the third-ranked West Dundee Leafs, 5-2, in its last outing before the NAPHL Playoffs. That loss snapped a 14-game unbeaten streak (13-0-1). The Falcons have gone 14-2-1 since opening the season with a 6-3-0 record.