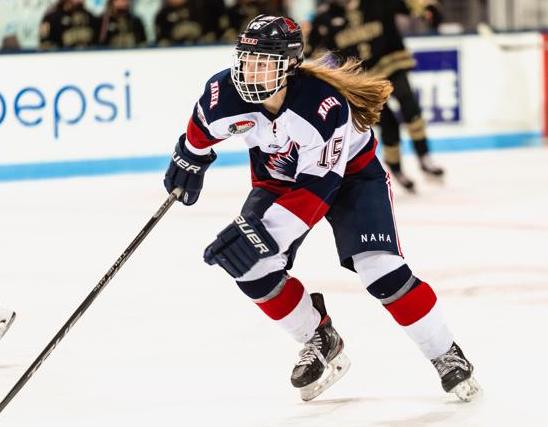 Our first Games of the Week for 2022 lived up to expectations as everyone in the hockey world returned to action following a holiday break for many. Our featured games included contests from the CCM 2010 Shootout at Notre Dame and the North American Hockey Academy Winter Showcase for girls outside of Boston – as well as a matchup of Northeast 2008 Boys rivals in New Jersey.

Every game was tight right up until the end, with one ending in a tie and another being decided by a single goal. Each of our Week 15 Games can still be seen on LiveBarn, so we have left the time, dates and locations of the contests in this Weekend Wrap so you can go back and watch them if you’re interested.

Please feel free to send us videos from your games that we should consider for our Plays of the Week feature. Send them to us on Twitter, tagging @MYHockeyRanking and using the hashtag #MHRPOW. And we are always happy to retweet game updates, scores or anything else about your programs you’d like to send our way.

If you have video footage, scoring information or other information from any of the games we feature each week, please feel free to send that to us as well for use in our Weekend Wraps. The more game details we have for our write-ups and video highlights the better.

Video highlights of this week’s games can be seen by CLICKING HERE.

After a back-and-forth opening seven minutes, the Jr. Flyers potted a pair of goals in less than a minute and then skated away with a 4-1 victory. They extended the lead to 3-0 before NAHA got a third-period marker from Audrey Knapp to make things interesting. Philadelphia iced the result with an empty-net goal in the waning moments, however. Defender Grace Dwyer joined the rush on the second first-period Jr. Flyers goal and finished a beautiful 3-on-2 passing play to bury the eventual game-winner. Philly went 3-0 on the weekend, also beating No. 16 Northwood School, 4-1, and the No. 7 Bishop Kearney Selects, 5-2. They improved to 32-7-3 on the year and now have outscored their opponents, 172-70. This setback was the lone loss for NAHA on the weekend as the Winterhawks beat the No. 25 Washington Pride, 6-2; the Selects, 5-2; and Northwood, 3-2. NAHA is 33-12-3 and has outscored its foes, 156-77.

Bishop Kearney wrapped up a 2-1 weekend at the North American Hockey Academy showcase with an exciting 5-4 victory against a tough Jr. Flyers team that concluded the tournament 1-2. The Selects opened the event with a 4-1 loss against the 13th-ranked hosts from NAHA before hammering the No. 45 Boston Advantage, 11-1. BK finished the weekend with an overall record 32-9-4 and holding a 158-71 scoring advantage over all opponents. The Jr. Flyers knocked off the 51st-ranked Connecticut Jr. Rangers, 7-0, and fell to NAHA, 3-2. They are now 26-15-3 and have outscored their opponents,150-92. After Philly opened the scoring in the first period, Quinn Dunkle walked in from the point and scored on a slapshot to even the score at 1 after the opening frame. A beautiful tic-tac-toe power play goal pushed the Jr. Flyers out in front in the first minute of the second period, but BK responded seconds later to tie it as Dunkle struck again. An amazing individual effort and pretty short-handed deke by McCarthy Finley gave the Selects their first lead with 6:23 left in the second, but this time it was the Jr. Flyers’ turn to respond and even things at 3 heading into the third on an Ava Thomas tally. Third-period breakaway goals by Miranda Calderone and Lucia DiGirolamo would put the game away for BK in the final frame, with DiGirolamo’s shorty with 4:30 left proving to be the GWG.

The Jr. Gamblers posted one of their three ties at the CCM 2010 Shootout at Notre Dame en route to a 2-0-3 tourney record and a fifth-place overall finish out of 18 teams. They beat No. 22 Indiana Elite, 10-1, and 10th-ranked Little Caesars, 3-2, while also skating to deadlocks against the 13th-ranked Chicago Reapers and No. 28 Philadelphia Hockey Club. Northeast Wisconsin is now 19-4-7 on the season and has outscored its opponents, 167-60. The Blues, who went 2-1-2, beat the Reapers, 3-0, and Indiana, 5-3, and skated to a 2-2 tie vs. Little Caesars to place eighth in the overall standings. No. 25 Fox Motors ran the table at Notre Dame, posting a 5-0 record as the only team that didn’t suffer a loss or a tie, and outscoring its opponents, 27-6. St. Louis is now 34-10-8 on the season and holds a 227-107 scoring advantage over its opponents. This matchup truly was a see-saw affair with neither team ever leading by more than a goal and the Jr. Gamblers tying it on a Beckett Ertel goal with 4:40 remaining in the third period. That came less than two minutes after St. Louis had taken a 4-3 lead when Paxton LaPlante walked in from the right point and scored on a hard, low wrister. The Gamblers scored first, with Jackson Hair tallying and Ozzie Ware later putting them in front, 2-1. The Blues tied it at 2 on a Kayden Scholl wraparound early in the second before Rocco Albanese circled through the D and sniped a high wrist shot to put them in front, 3-2, with 10 minutes left in the game. Ryan Hanutke pulled the Gamblers even at 3 with 6:45 left, setting up the LaPlante and Ertel goals in the final 6:26.

Mid-Fairfield, which had been off since losing to the No. 15 Hartford Jr. Wolfpack, 5-1, Dec. 12, improved to 30-12-5 on the year and now has outscored its opponents, 211-116. The Avalanche, who defeated the No. 65 New Jersey Colonials, 5-0, Saturday, are 28-15-3 and have outscored their opponents, 192-116. Mid-Fairfeld got on the board first in this one before Ryan Murphy took advantage of a slow line change, streaked down the left wing and fired a shot past the goalie to tie the game at 1 in the second period. It wouldn’t take long for the Rangers to answer, however, and they would score the game’s final two goals to earn the victory.