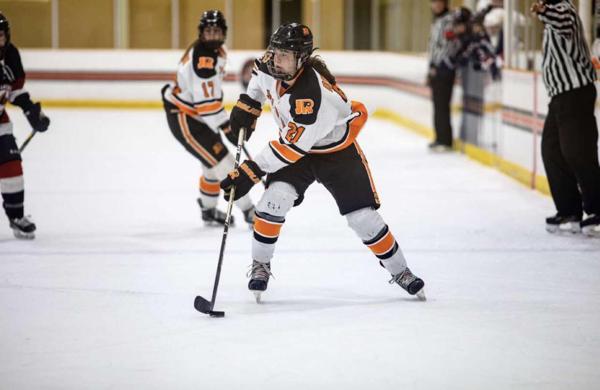 Happy New Year and welcome to the first full hockey weekend of 2022! While it seems like the end of the 2021-22 season is still way off in the distance, the truth is that before you know it we will be heading into league, state, district and provincial playoffs, and USA Hockey Nationals are only about three months away.

For our Week 15 MYHockey Rankings Games of the Week we have a nice cross-section of age groups and genders, featuring a contest from the 2010 USA Boys CCM Shootout at Notre Dame, a Northeast boys rivarly matchup and a pair of top-11 showdowns from the North American Hockey Academy Girls Showcase in Massachusetts.

All of this week's featured games can be seen on LiveBarn either live or on demand.

If you have video footage or scoring information from any of this weeks featured matchups, please feel free to send that to us as well for use in our Weekend Wrap feature. The more game details we have for our write-ups and video highlights the better.

A pair of East Coast top-10 rivals meet on the final day of the NAHA Showcase in Massachusetts. This will be the third meeting between the teams this season, with the Jr. Flyers holding a 2-0 advantage. Philadelphia won the first matchup, 5-4, Oct. 16 before skating to a 8-1 victory Dec. 4. The Jr. Flyers bring a 29-7-3 record into the weekend, having outscored their opponents, 159-66. They have won their last 10 games dating to a 3-2 overtime loss to the second-ranked Chicago MIssion Oct. 22. Philly skated to a 2-all tie with No. 1 Little Caesars the day before that loss. Just prior to those games, the Jr. Flyers recorded a 4-1 victory against No. 5 Shattuck-St. Mary's and a 6-2 win over ninth-ranked Minnesota Elite Tradition Vegas. Other losses came against No. 6 Minnesota Elite Tradition Black, the Mission, No. 16 Northwood School and No. 7 Bishop Kearney. Philadelpha also has victories against the Nos, 7, 10, 13, 17 and 18 teams. NAHA came into the weekend with a 30-11-3 record and holding a scoring advantage of 141-67 over their opponents. They have won three straight games and are unbeaten in their last four since losing to the Mission Dec. 11. NAHA gave top-ranked Little Caesars all they could handle in a 2-1 loss Dec. 10 and defeated the 10th-ranked East Coast Wizards Nov. 27 and 28. They also knocked off the No. 11 Connecticut Polar Bears and posted a pair of wins vs. the No. 2 Misison in addition to a tie against top-ranked Little Caesars in October and November. Other victories have come against the Nos. 4, 5, 12 and 13 teams.

The second game on Sunday from the NAHA Showcase features another pair of Northeast powerhouses, this time at the 16U level, as the Bishop Kearney Selects and Jr. Flyers face off for the third time this season. The Selects hold a 2-1 edge in the season series thanks to 4-3 and 3-0 victories in September and October. Philadelphia earned a 4-3 victory Oct. 1. BK is 13-2-2 in its last 17 games, with the only losses coming against the No. 8 Chicgo Young Americans and No. 3 Shattuck-St. Mary's in a shootout. The Selects also tied Shattuck, 1-1, and the 14th-ranked CT Polar Bears, 5-5. Entering the weekend they have outscored their opponents, 141-62, while compiling a 30-8-4 record. BK opened the year by going 8-4-2 and is 22-4-2 since. Philadelphia is 25-13-3 on the year and has outscored its foes, 137-84. The Jr. Flyers dropped a pair of decisions to No. 18 Pittsburgh Penguins Elite in their last outings of 2021 Dec. 11 and 12. Prior to that they had won 10 straight games without allowing more than two goals in any of those contsts. Four of those victories were shoutous, and they allowed only a single goal in five of the wins.

This matchup is a top-12 battle from the CCM 2010 shootout at Notre Dame. These teams will will have played two games in the tournament before this Saturday morning tilt. The Blues opened play with a 3-0 victory against the No. 13 Chicago Reapers Friday, while the Jr. Gamblers skated to a 10-1 victory vs. No. 22 Indiana Elite. The Gamblers and Reapers were scheduled to play at 3 p.m. Friday, with St. Louis slated to take on Philadelphia Hockey Club at 3:30 p.m. Northeast Wisconsin entered the weekend with a 17-4-4 record and holding a 143-46 scoring advantage over its opponents. The Jr. Gamblers had allowed fewer than two goals per contest, recording five shutouts and holding 10 other opponents to a single goal. Ironically, they gave up a combined 15 goals in two of their losss, a 6-3 setback vs. the 10th-ranked Chicago Fury and a 9-5 loss to No. 19 Florida Alliance. Their other losses came against the Blues, 2-1 in overtime, and the No. 2 Minutman Flames, 4-1. Their opening-day victory at Notre Dame streched the Jr. Gamblers' winning streak to seven games, and they are 13-2-3 in their last 18 outings. In addition to the OT victory against NE Wisconsin, the Blues also skated to a 1-1 tie against the Jr. Gamblers in September. They are 32-9-6 for the season and have tallied a remarkable 211 goals while surrendering just 95. Friday's win against the Reapers extended the Blues' unbeaten streak to 14 games (13-0-1). They have outscored their last three opponents, 22-3, and have notched six shutouts in their last 10 outings.

The 2008 teams representing two of the top youth hockey programs in the Northeast square off just outside of New York City Saturday. This will be their first meeting since the Rangers skated to an early season 7-2 victory over the Avs way back on Sept. 10. Mid-Fairfield enters the weekend with a 29-12-5 record and having outscored its oppoinents, 208-115. The Rangers dropped their most recent outing, 5-1, to the No. 15 Hartford Jr. Wolfpack. That was their fourth loss in the last five contests, but two of those setbacks came against Hartford and the other two were vs. the nation's third- and fifth-ranked teams. In betwen, Mid-Farfield knocked off the No. 12 St. Louis AAA Blues, 5-4. The Rangers are 4-7-1 in their past 12 outings after opening the season by going 25-5-4. They look to right the ship against an Avalanche team that is 27-14-3 and has gone 2-4-0 in its last six games. Two of those setbacks came against the No. 4 Chicago Mission, and North Jersey also beat the 21st-ranked Chicgago Reapers. North Jersey has outscored its opponents, 181-113, on the year and is 3-6-1 in its last 10 outings after the opening the season by going 24-8-2.