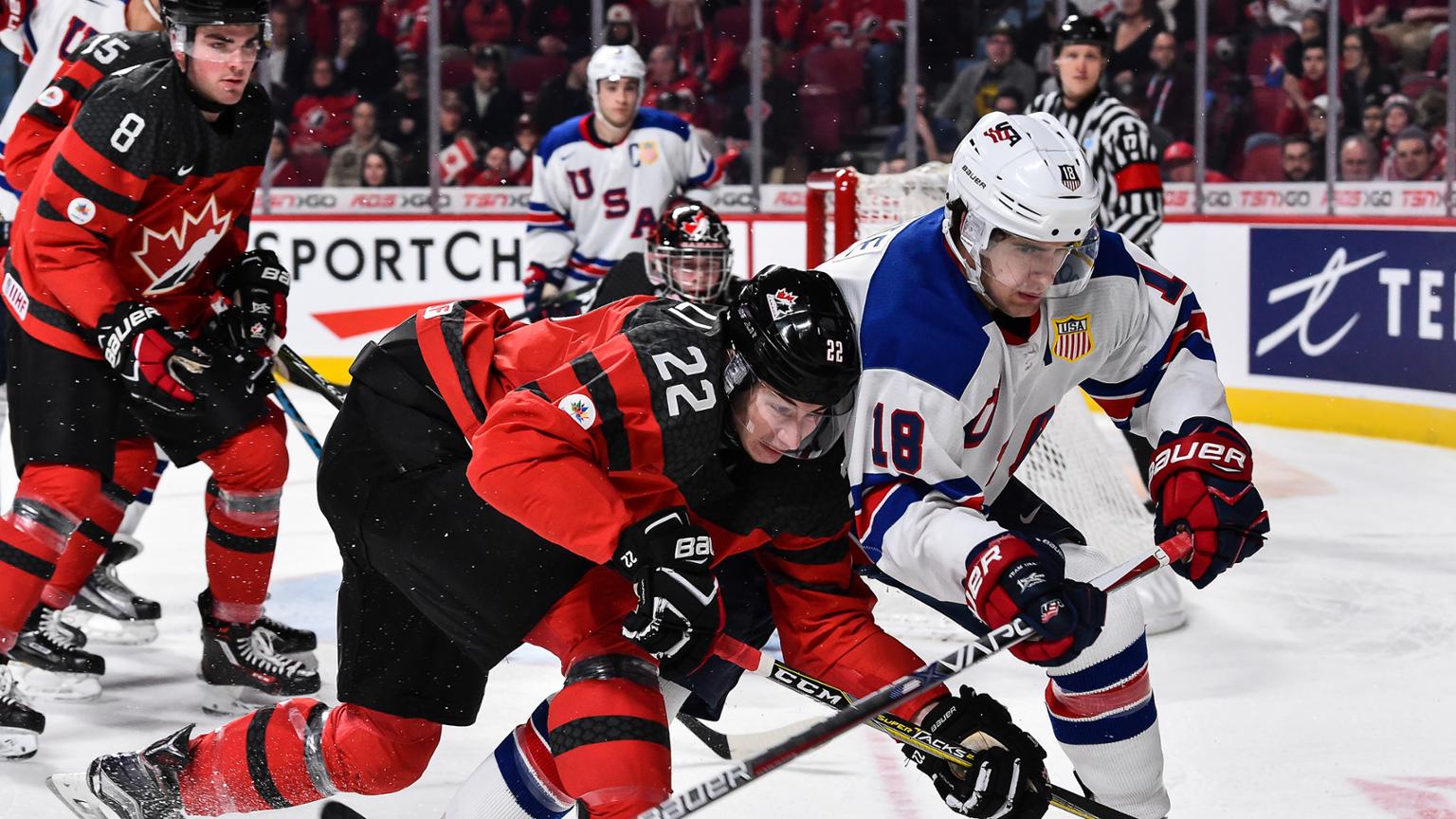 For most people around the world, late December is considered the winter holiday season. But for hockey fans it’s WJC season.

That’s right, it’s already been almost a year since the United States captured a bubbled gold medal at the International Ice Hockey Federation 2021 World Junior Championship in Edmonton, completing a run for redemption with a 2-0 victory over the host Candians at Rogers Place. Canada took home the 2020 gold with a 4-3 gold medal-game win against Russia in the Czech Republic as the U.S. surprisingly finished out of the money and in sixth place overall, behind Switzerland and just ahead of a Czech team the Americans had struggled to beat in overtime.

Most of the hockey world figured the United States would come to Edmonton with a chip on its shoulder after the disastrous showing in 2020, and we all looked forward to a possible gold-medal showdown between the two North American powers in front of a frenzied partisan host crowd.

That’s not exactly how it played out, however, as the 2021 WJC was played behind closed doors in front of no fans because of ongoing concerns related to the COVID-19 virus. It was a huge relief for hockey fans that the tournament completed at all after what we had lived through the previous 10 months, and while Canadians rightfully took pride in their team’s silver-medal performance, something was missing without the passionate Canadian fans filling the arena.

The tournament opened with nine German players sidelined for the first several days because of positive COVID tests. Fortunately, there were no additional positive tests once the tournament began and throughout its duration. The shorthanded Germans battled gamely and earned worldwide respect by never giving up and managing to win two games during pool play en route to an eventual sixth-place finish.

Because no fans were permitted a year ago and Red Deer, which was supposed to co-host the WJC with Edmonton, ended up not hosting any games because of the bubble situation, the 2022 tournament returns to those two cities this year. Starting Sunday, with the opening 2 p.m. Eastern matchup between Finland and Germany, fans will be back in the building to provide the atmosphere last year’s event lacked.

It won’t be a full return to normal, however, as all games and venues will be limited to half capacity after Alberta enacted new restrictions amid concerns about the spread of the Omicron variant just days before the tournament’s opening faceoff.

As always, teams participating in the 2022 WJC will be divided into two divisions – Pool A and Pool B. The U.S. and Canada are in different pools, meaning they can’t meet until the playoff round, unfortunately eliminating the New Year’s Eve matchup between the two that so many of us had become accustomed to and looked forward to annually. We also won’t be treated to intense opening-round matchups between fierce rivals Finland and Sweden or Czech Republic and Slovakia, which should make the playoff round even more intense and intriguing than usual if those teams match up in win-or-go-home contests.

Not to worry, though, WJC 2022 still has plenty of great matchups and rivalry games in store for us, including important and exciting Dec. 31 contests featuring the U.S. vs. Russia (9:30 p.m. ET) and Canada vs. Finland (7 p.m. ET).

Those contests conclude pool play as the playoffs begin with the quarterfinals Jan. 2 at 2:30 p.m. ET. Finland has emerged in recent years as a consistent top-four finisher in the highest-level IIHF events. The Finns have captured three golds and one bronze since 2014 to tie Canada for the most championships during that span.

Meanwhile, the U.S. has earned a pair of gold medals, a silver and two bronze to tie Canada for the second-most overall medals since 2014. In addition to the three gold medals, Canada has recorded a pair of second-place finishes. Russia has more medals than anyone since 2014, with three silver and three bronze, but has not captured any titles. Slovakia and Sweden are the only other teams to have medaled at the past eight WJC tournaments, with the Swedes winning a silver and bronze and the Slovaks placing third once.

It won’t take long for the action to heat up on opening day following the first contest between Germany and Finland as Russia and Sweden will tangle in a 4:30 p.m. ET battle that will have huge playoff-seeding implications, followed by Canada vs. Czech Republic at 7 p.m. ET and the U.S. vs. Slovakia at 9:30 p.m. ET.

Here are how the pools break down:

Canada and Finland are the favorites in Pool A, and it will be interesting to see who emerges from the pack to finish third or possibly pull off an upset to secure the second seed. If Germany was able to place sixth overall last year despite having nine players out for part of the tournament because of COVID, is it possible that the Germans can place third in this group in 2022? Finishing third is important because most years that allows teams to avoid facing the U.S. or Canada in the quarterfinals.

Sweden has not been a major player in recent WJC tournaments, so all eyes will be on the Swedes to see if they can leapfrog Russia, the top overall medal-winner since 2014, or the U.S. this time around. Meanwhile, Switzerland and Slovakia will look to avoid the relegation game by finishing fourth in pool play or potentially finding a way to earn the third seed.

All WJC games can be seen live on NHL Network in the U.S. and TSN in Canada. Here is the complete schedule: