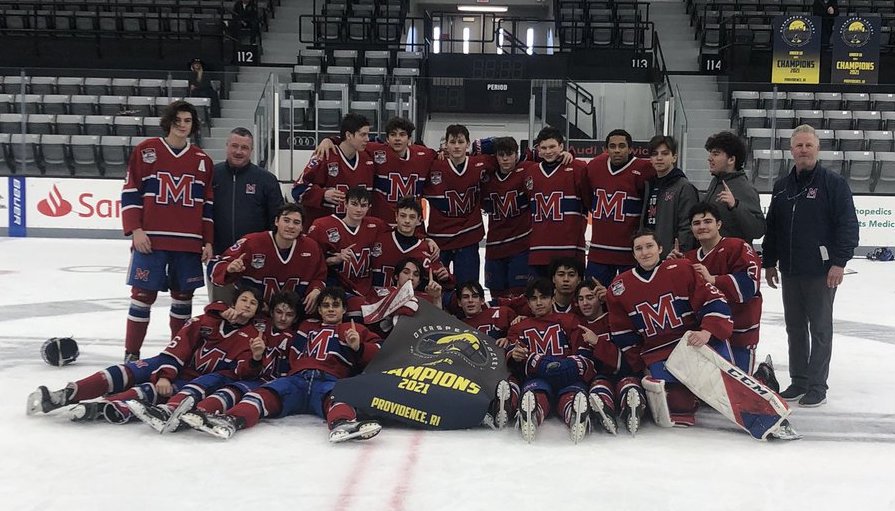 Our Week 12 Featured Games of the Week turned out to be all we expected and maybe even a little more as Canada's top-ranked Boys Prep team from St. Andrew's College split a pair of games with Culver Academy, the third-ranked USA Boys Prep team, in Prep Hockey Conference action.

This week's compete Weekend Wrap can be found below.

If you know of any great upcoming matchups that could be considered as one of our Games of the Week, please reach out and let us know about them by messaging our Twitter account @MYHockeyRanking or sending an email to scott@myhockeyrankings.com.

St. Andrews and Culver jockeyed for position in the PHC standings over the weekend, splitting a pair of tight games at LaBrier Family Arena in Aurora, Ontario. Saturday's game went right down to the wire before Luke Devlin buried an empty-net insurance marker with 21 seconds left in regulation to secure the 5-3 victory for the Saints. Eli Sebastian assisted on Devlin's third tally this year in PHC contests. It was Sebastian's eighth assist in league play. Five different players scored for St. Andrew's, with Jax Wismer, Callum Arnott and Aydar Suniev each recording a goal and an assist while Sebastian and Jonathan Castagna contributed a pair of helpers. Culver led, 3-2, on an unassisted tally by Jonathan Hunt with 15:35 left in the second period, but the Saints would rally for the final three goals of the game. Miles Muth and Hayden Stavroff also scored for Culver. St. Andrew's goalie Rowan Kimens made 36 saves to earn the victory.

Sunday's matchup was a back-and-forth affair decided in overtime that featured five goals in the first period, four in the second and three in the third. The Saints actually opened the scoring on Jack Pridham's goal just 26 seconds into the game, but Culver responded with tallies by Colin Kessler and Hayden Stavroff in the game's opening 3:39 to take the lead before the Saints' Ethan Mitchell made it four goals in the first 5:32 with a tally of his own. Sebastian closed the scoring with 7:40 left in the opening frame to give St. Andrew's a 3-2 lead after one. Culver scored the game's next three goals in the opening 13:36 of the second period, with Kessler notching his second and picking up an assist on Isasc Fectau's first goal. Fectau struck again just over five minutes later before Arnott's unassisted tally for St. Andrew's cut the margin to 5-4 after 2. The Saints roared out of the locker room to open the third, with Jack Pridham and Castagna scoring to take a 6-5 lead with 6:35 remaning, but Hayden Lewis tied it for Culver with 4:43 left. Hayden Stavroff buried his second of the game and his sixth of the PHC season in overtime off a feed from Kessler to secure the victory for Culver. The wo teams combined for 75 shots on goal, with Culver's Cross Sherman recording 36 saves to earn the victory. Daniel Salimivuori and Kimens split time in goal for St. Andrew's.

Mount St. Charles/Rhode Island Saints handed Windy City its only loss in round-robin play in this contest at the Overspeed Hockey Holiday Classic in Rhode Island, skating to a 4-2 victory thanks to a pair of goals from Sacha Boisvert and single tallies by Luke Gallo and J.J. Monteiro. Jack Parsons earned the win in goal. These two teams met again for the tournament championship Sunday with the exact same result. After a scoreless first period in the title matchup, MSC would fall behind in the second frame before Vinny Ipri tied it in the final 10 seconds of the period. Windy City responded to take a 2-1 lead with 10 minutes to play in the third, but the Saints would score the last three goals to capture the championship hardware. Monteiro tied it, and Theo Kiss took a feed from Jack Montaldo to bury the game-winner with 52 seconds left. Boisvert's empty-netter sealed the deal for MSC, which went 4-0 on the weekend to secure its hold on the top national 15U Tier 1 ranking with a 28-3-1 record.

Host Waterloo earned the victory in a close one at the Gold Puck AAA Tournament, skating away with a 4-3 victory. The Wolves would end the tournament with a 3-1 record to improve to 17-8-5 on the year, while Hamiton went 0-4 and fell to 18-11-5. The 14th-ranked Windsor Spitfires rolled through the tournament, compling a perfect 6-0 record and knocking off the No. 9 Don Mills Flyers, 3-0, to earn the title. Windsor is 21-6-2 on the year, while the Flyers went 4-2 and are 21-6-4.

Vernon dropped a 6-3 decision to the No. 14 Salmon Arm Silverbacks Saturday but rebounded nicely to record an 8-6 win in this matchup with No. 9 Kamloops Sunday at Priest Valley Arena. This was the third high-scoring game featuring these two teams as the Blazers beat Vernon, 9-6, earlier in the season and another contest ended in a 6-all tie. The Mustangs are now 20-4-3 on the year, while Kamloops is 12-3-1.