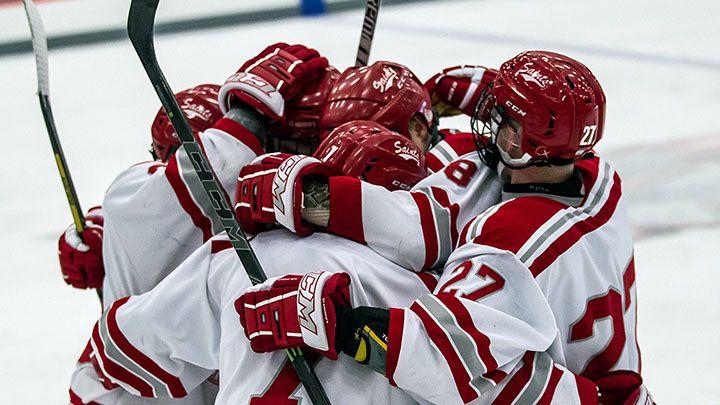 Week12 MHR Games of the Week

We bring Canada back into the mix for our Week 12 Games of the Week, with three of our contests taking place north of the border. One of the matchups, our featured games of the week, include the No. 3 USA Boys Prep team taking on the top-ranked Canadian Boys Prep team in an important Prep Hockey Conference two-game series.

No. 3 USA Boys Prep Culver Academy travels to St. Andrews College in Aurora, Ontario, for a two-game series Saturday and Sunday at the LaBrier Family Arena. St. Andrews looks to leapfrog Culver, who they trail by a point, in the standings after playing an ambitious schedule to date against some of the top teams in the U.S.

We have one matchup of top-10 United States Tier 1 Boys teams as the Nos. 1 and 7 teams at the 15U level face off Saturday at the Overspeed Hockey Holiday Classic in Rhode Island. The other two contests are all-Canadian matchups, with one of them featuring the Nos. 13 and 18 16U AAA Boys teams taking the ice at the Gold Puck AAA Tournament in Waterloo, Ontario, and the other being a top-10 13U AAA Boys matchup from Western Canada.

St. Andrews, the top-ranked Canadian Boys Prep team, looks to pass Culver Academy, the No. 3 USA Boys team, in the Prep Hockey Conference standings in this weekend series. The Saints are 2-4-0-1 in league play, while Culver is 2-2-0-1. Culver also is ranked 11th in the USA 18U Tier 1 rankings. St. Andrews has played an extremely difficult schedule, facing some of the top-ranked USA 18U Tier 1 teams. The Saints, who are 7-9-0 overall, have played the toughest schedule among all Canadian Boys Prep teams. They dropped a pair of games to Pittsburgh Penguins Elite, the No. 7 USA 18U Tier 1 team, as well as to No. 13 Victory Honda, and also fell to second-ranked Mount St. Charles, 4-3, in overtime. St. Andrews and Culver split a pair of one-goal decisions Nov. 12 and 13, and the Saints beat No. 17 South Kent Selects Academy, 5-0, Nov. 21. The Saints fell to 10th-ranked Northwood School, 4-1, the following day. They have outscored their opponents, 70-58, this season. Culver is 12-5-0 and has outscored its foes, 77-56, while chalking up wins against the Nos. 13, 16 and 17 USA Tier 1 Boys teams.

Mount St. Charles looks to continue its strong season and tighten its grip on the top USA Boys 15U Tier 1 ranking this weekend at the Overspeed Hockey Holiday Classic in its home state. This matchup of top-10 clubs takes place on MSC's home rink in Woonsucket, R.I. Windy City already had recorded a pair of tournament wins heading into Saturday's contest. The Storm knocked off the No. 57 Ohio Blue Jackets 5-1, and No. 16 South Kent Selects Academy, 4-3, Friday to improve to 27-14-1 on the year. They have oustcord their opponents, 156-109, on the year. Mount St. Charles knocked off the same two teams Friday to improve to 27-3-1 on the season and set up a battle of tourney unbeatens. MSC has outscored its opponents by more than 100 goals and allowed right around 2 goals per game. They have won four straight games, including a 2-1 overtime victory against No. 2 Shattuck-St. Mary's Nov. 20. That was MSC's second-straight loss, as they dropped an overtime decision the previous day to the Boston Jr. Eagles No. 2 15U team. Prior to that Mount St. Charles had opened the season by going 22-1-1. These two teams met on Sept. 23, with MSC skating away with a 7-2 victory.

It's a top-10 Sunday matinee from out West as a pair of 13U powers meet in British Columbia. Vernon took a 10-2-1 record into its Friday matchup against the No. 73 Cranbrook Bucks and had outscored its opponents, 104-52. The Mustangs entered the weekend having won four straight games after a 6-2-1 start to their season. They had outscored their opponents, 31-8, during that streak. Their only losses on the season came against the No. 2 Semiahmoo Ravens and these same Blazers. The Blazers skated to a 9-6 victory in the previous meeting Nov. 12. The two teams also played to a 6-6 tie Nov. 6. Kamloops has an impressive 20-3-3 mark coming into this contest and has outscored its opponents, 138-89. The Blazers also have won four straight, outscoring those foes, 23-13, and eight of their last nine outings. Two of their losses also came against second-ranked Semiahmoo and they also fell in overtime to the No. 10 Kelowna Rockets.