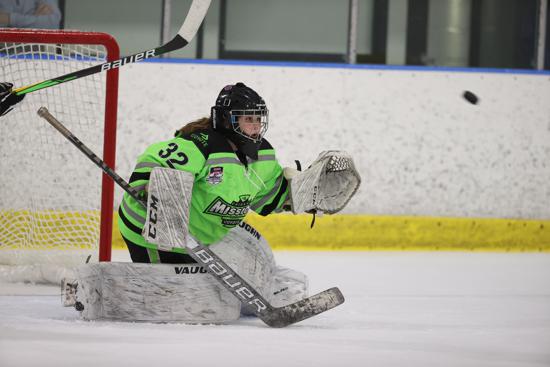 CLICK HERE FOR OUR VIDEO WRAP-UP WITH GAME HIGHLIGHTS

Another great weekend of youth hockey action is behind us, and as we dive deeper into the holiday season, the 2021-22 hockey season continues to fly by at a breakneck pace. Our Week 11 Games of the Week featured USA Girls action at the 12U, 14U and 18U Tier 1 and Tier 2 levels.

Three of our Games of the Week were part of the CCM Windy City Girls Elite Tournament, which featured 72 teams competing at the 12U, 14U, 16U and 19U Tier 1 and Tier 2 levels. Our fourth matchup was a rare battle between highly ranked Tier 1 and Tier 2 teams at the 12U level as New England Girls Hockey League rivals the Massachusetts Spitfires, ranked second in Tier 1, and the Casco Bay Mariners, ranked first in Tier 2, faced off Sunday in Foxboro.

Here is a look at how this past weekend's action played out. All of these games can viewed on-demand at LiveBarn.com.

While this may have been a minor upset on paper, the T-birds had a great Windy City showing, going 5-0-1 and outscoring their opponents by a 19-6 margin to capture the championship and improve to 25-0-1 on the season. Sno-King opened the tournament by skating to a 1-1 tie against the No. 24 Chicago Hawks before winning the rest of their games, including victories over the sixth-ranked Boston Jr. Eagles, the No. 17 North Shore Warhawks and a rematch win vs. Chicago. Glenview went 1-3-0 to drop to 23-4-3 for the season. In this game, Sno-King jumped out to a 1-0 lead before the Stars tied it with four minutes left in the second period. The game-winning tally came without about 12 minutes reamaining in the contest.

The MIssion went 0-1-1 in their first two Windy City Turnament outings before rallying to go 4-0 the rest of the way and earn the championship. Chicago's tie came against No. 21 Dallas Stars Elite, but the Mission bounced back to bury the Stars, 11-1, in the semifinals before knocking off No. 18 Florida Alliance, 5-1, for the title. They also beat eighth-ranked Team Illinois, 2-1, and are 34-4-1 overall this season. The Lions went 2-2-0 at the tournament and are 10-4-2 on the year. LA lost to the third- and 18th-ranked teams and beat the 25th-ranked Chicago Young Americans. In this contest, the two teams played a back-and-forth, up-and-down scoreless first period during which each side had outstanding opportunities and both goalies made tremendous saves. The game-winning goal was scored with about five minutes to play in the second period by Nicole Gorbatenko, who took a feed from her sister Rachel in the defensive zone, split the defense and skated it all the way in for the forehand-backhand deke and finish. That's the exact same combination that teamed up to score the Mission's overtime winner in last May's national-championship game victory against the Minnesota Green Giants.

The Jr. Predators were fit to be tied this past weekend, as this 1-1 deadlock was one of three they recorded in going 1-0-3. Nashville still is an impressive 25-1-4 on the season after its victory over the Florida Alliance and ties vs. the Anchorage North Stars, Grand Rapids and the 31st-ranked Glenview Stars. The Jr. Preds just missed advancing to the playoff round, which is where Grand Rapids fell in the semfinals, 3-1, against the No. 4 North Shore Warhawks. That left the Griffins with a 15-4-2 mark for the season and a 3-1-1 tournament record. Selena Falzone got Nashville on the board in the first period with a rebound goal, but the Griffins would tie the game with fewer than 12 minutes remainign in the final frame.

In a fun New England Girls Hockey League matchup between highly ranked Tier 1 and Tier 2 teams, the Mariners jumped out to a 1-0 late first-period lead on a power-play goal by Caroline Rousseau before the Spitfires rallied for the final four goals of the game to skate off with the win. Alexandra Lee netted the first and fourth goals, one in the second and one in the third period, and Kathryn Butkus buried what turned out to be the game-winner very late in the second frame. Alexa Georgantas had the Spitfires' third tally. CLICK HERE for the complete GameSheet scoring summary. With the victory Massachusetts improved to 17-6-2 on the year, while Casco Bay fell to 17-2-3. The two teams were scheduled to meet again later on Sunday, but no score had been posted when this was written.