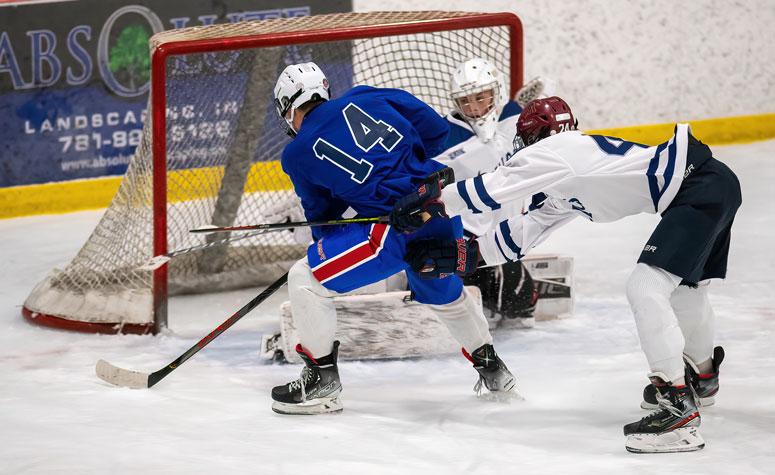 Week 9 MHR Games of the Week

Whenever the NorthEast Pack gets together for an event it usually provides us with more than enough matchups of highly ranked teams to fill our full slate of weekly Games of the Week. This weekend's event at the UPMC Lemiuex Sports Center in Pittsburgh doesn't let us down.

We head to the Steel City for all four of our Week 9 Games of the Week as many of the nation's top-ranked teams in the USA Boys Tier 1 15U, 16U and 18U categories face off. The showcase started Friday and runs through Sunday, and all of the games can be seen on LiveBarn.

Our LiveBarn Featured Game of the Week pits the second- and third-ranked 15U teams as No. 2 Shattuck-St. Mary's takes on No. 3 Bishop Kearney Selects bright and early Sunday morning. Saturday at 5 p.m. Eastern we have a pair of great 16U matchups featuring our Nos. 2, 5, 6 and 7 teams, and finally on Sunday at noon in 18U play the third-ranked Long Island Gulls take on No. 10 Bishop Kearney Selects.

The perennial national-powerhouse and Minnesota District-champion Sabres head east to take on the New York-based Selects in a heavyweight matchup that could be a USA Hockey Nationals preview. Shattuck opened play in the NorthEast Pack showcase Saturday morning against top-ranked Mount St. Charles as part of their ambitious weekend in the Steel City. The Sabres entered the weekend with a 19-3-1 record and holding a 140-45 scoring advantage over their opponents. They had allowed just under two goals per contest and had won 15 of their previous 16 games, only falling to the No. 15 Colorado Thunderbirds, 5-4, in that span. Bishop Kearney was slated to take on No. 33 New Jersey Rockets Saturday and took a 30-6-2 record into that contest. They had scored 195 goals and allowed just 70, also fewer than two goals allowed per outing, and had won six straight games since dropping three games in a four-game span against No. 18 St. Louis Blues, No. 19 South Kent Selects Academy and No. 33 New Jersey Rockets. The recent winning streak includes victories against the Nos. 5, 14 and 16 teams in the nation.

In one of two great NorthEast Pack 5 p.m. Saturday 16U matchups, the Gulls and Pens Elite meet for the third time this season after splitting a pair of previous matchups. Long Island skated to a 5-3 victory Sept. 11, while Pittsburgh earned a 3-1 win Oct. 16. Pens Elite dropped a 5-0 decision to No. 5 Mount St. Charles to open the weekend Friday night. The Gulls also were scheduled to open play Saturday morning against MSC. Long Island entered the weekend with a 24-6-5 record and having outscored its foes, 140-72. Long Island had won four of it's previous five contests, with the loss coming against No. 14 Florida Alliance in a shootout. They were 8-2 in their previous 10 games dating to the loss to Pens Elite. Long Island went 7-0-2 to open its season and was 17-6-3 since. The Gulls were 4-2-1 vs. teams in this weekend's event before Saturday's game. Pens Elite dropped to 14-6-0 with Friday's loss, and they were 0-3 in their previous three outings after winning 14 of their first 17 contests to open the season. Pittsburgh had outscored its opponents, 67-54, for the season and was 4-5-0 against teams attending this weekend's showcase after Friday's loss.

The other outstanding 5 p.m. 16U Saturday NorthEast Pack matchup features a pair of East Coast powerhouses. This will be MSC's third game of the weekend, as they already will have faced No. 2 Long Island Gulls and No. 6 Pens Elite before the puck drops on this one. Meanwhile, the Rockets were scheduled to open play Saturday morning vs. No. 4 Bishop Kearney Selects. MSC was 19-7-1 after beating Pens Elite, 5-0, Friday and had outscored its opponents, 107-45, allowing an average of just 1.7 goals per game. Then Friday win pushed Mount St. Charles' record to 7-1 in its last eight contests, with the lone loss coming against No. 20 Neponset Valley River Rats. That streak followed a 3-2 loss to the second-ranked Gulls and a 4-3 win vs. Bishop Kearney. MSC also fell to Pens Elite and the Gulls by idential 2-1 scores while knocking off the Selects 6-2 back in September. Mount St. Chalres has recorded seven shutouts on the season. each of those coming in the past 15 outings. This will be the third meeting betwen these teams thus far, with MSC earning 4-1 and 4-3 victories previously. The Rockets entered the weekend 24-12-3 and holding a 144-115 scoring advantage against their opponents. New Jersey was riding an eight-game winning streak coming into the event, with the lone loss coming against the No. 18 Buffalo Regals.

Our final Week 9 Game of the Week is another NorthEast Pack matchup on the final day of play for the weekend as the Gulls and Selects face off for the fourth time with Long Island having won the previous three meetings by a total of just three goals. The most recent meeting was a 3-2 overtime win for the Gulls Oct. 24. The Selects opened play at the showcase Friday evening against No. 7 Pens Elite, skating to a 6-3 victory to improve to 19-11-2 on the year heading into Saturday's action. They were scheduled to play the 20th-ranked New Jersey Rockets Saturday. Following Friday's victory, their sixth in the last 10 games, Bishop Kearney had outscored its opponents, 126-73. The Selects knocked off No. 5 Yale Jr. Bulldogs, 5-1, Oct. 23, No. 9 Buffalo Regals, 2-1, the same day and Pens Elite, 4-2, Oct. 17. The Gulls were set to face Pens Elite and the Rockets Saturday before Sunday's matchup with Bishop Kearney. They entered the weekend 29-4-2 and holding a 119-63 scoring advantage over their opponents. Long Island had gone 10-1 in its previous 11 contests, winning three of those games in shootouts or overtime.