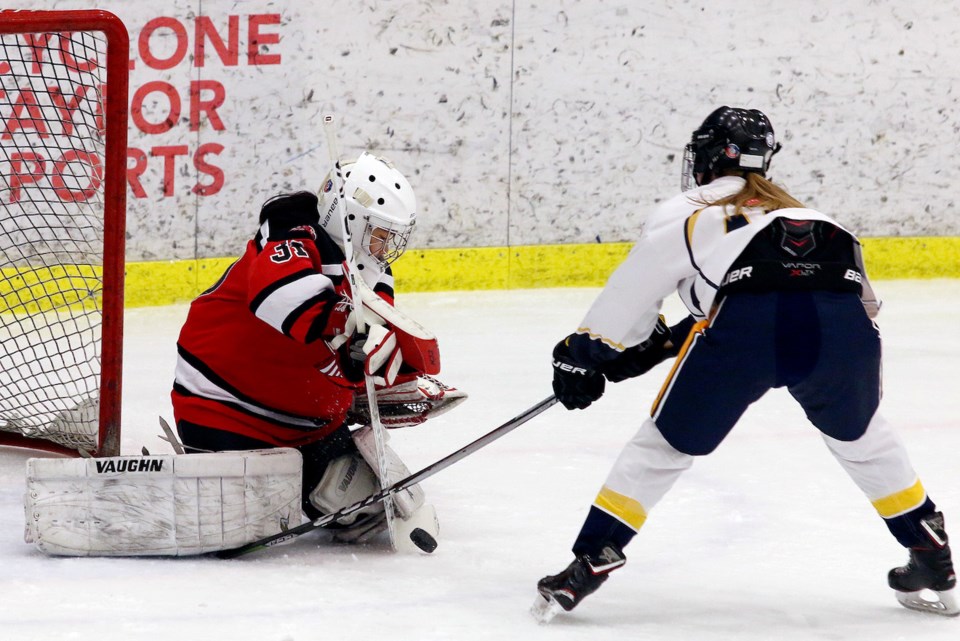 As we enter Week 8 of our 2021-22 rankings season and after being able to post Canadian rankings for the past several weeks, we are able to highlight some great Canada girls's and women's matchups as our Games of the Week. We've had enough recorded games to rank Canadian AAA teams since mid-October and we will be able to post rankings at all levels of minor hockey very soon.

This week's top contests feature Tier 1 matchups at the U13, U15, U18 and U22 levels. Our featured matchup of the week comes to us from Britsh Columbia as the second-ranked Richmond Ravens take on the No. 4 Surrey Falcons in U13 action. Each of our other contests featurs a pair of top-16 clubs facing off.

These two teams face off in British Columbia for the sixth time this season, with Richomond holding a 3-1-1 advantage in the series. Those five games have been decided by just five goals, however, including a 4-4 tie and a 5-4 overtime victory for the Ravens. Surrey's 5-3 victory Oct. 10 marks the Ravens' only loss of the campaign, as they bring a sparkling 18-1-1 record into the contest and hold a 145-30 scoring advantage over their opponents. Richmond is allowing fewer than two goals per game and has recorded seven shutouts on the season. The Ravens have held their opponents to one or fewer goals 12 times and are in the midst of a nine-game winning streak. Surrey enters the weekend with a 15-4-1 record, with three of the four losses coming against Richmond. The Falcons also are permitting fewer than two goals per contest, having ouscored their foes by a 126-30 margin. Surrey has posted nine shutouts and held its opponents to one or fewer goals 13 times. The Falcons are 2-2 in their last four outings, and their only other loss this year was against the No. 11 Tri-Cities Predators.

An Ontario Showdown has the Lightning and Sabres squaring off for the third time, with Durham West owning a 1-0-1 advantage in the season series. The two teams skated to a 2-2 tie Sept. 28, while the Lighting earned a 4-0 victory Oct. 8. Durham West is a remarkable 21-1-1 on the year, allowing just nine goals while scoring 65. The Lightning's lone setback was a a 1-0 white-knuckler against No. 14 the Etobicoke Dolphins Oct. 13. That loss ended a 17-game unbeaten streak (16-0-1). Durham West has rcorded two-straight shutouts and has posted 15 clean sheets on the season. The Lighting have allowed goals in just eight contests, and Stoney Creek is the only team to pot more than one goal against them. Stoney Creek is 10-6-3 on the year and holds a 44-30 scoring advantage over its opponents. The Sabres split a pair of games Friday, knocking off the No. 42 London Devilettes, 4-2, and falling to the No. 41 Kingston Ice Wolves, 2-1. They are 7-3-1 in their last 11 contests.

Another Western Canada clash, this time in the 15U age group, features a pair of Alberta top-15 rivals. Calgary, which was scheduled to play Saturday, entered the weekend with a 9-4-0 record and riding a five-game winning streak. Th Fire had held its last four opponents to one goal or fewer, outscoring them by a 14-3 margin, and held a 45-34 scoring advantage ofer their opponents for the season. This will be the first of at least four scheduled meetings between the two teams this year. Red Deer also was scheduled to play Saturday and took a 10-2-1 record into that contest, with both of those losses coming in its last four outings. Those setbacks came against the Nos. 7 and 21 teams. The Chiefs opened the year with a tie then reeled off eight straight wins before the recent losses. They have outscord their opponents, 44-26.

Back to Ontario for our final Week 8 Game of the week, this time at the junior U22 level as the Hurricanes and Canadettes meet for the second time this season. Mississauga took the first meeting, 5-2, Sept. 25 as part of a season-opening 13-game unbeaten streak. That streak ended with a 3-1 loss to the Etobicoke Dolphins Sept. 17, and since then the Hurricanes have gone 2-2, dropping their most recent outing, 1-0, to the 11th-ranked Kingston Ice Wolves. For the season, the 'Canes are 12-2-3 and have outscored their opponents, 49-23, allowing just 1.35 goals per game. They have recorded four shutouts and allowed one or fewer goals nine times. Brampton is 8-6-1 on the year and has dropped four strainght after sprinting to an 8-2-1 record to open the season. They lost a 4-3 overtime decision to the No. 2 Durham West Lighting in their most recent outing and hold a 37-32 overall scoring edge over their opponents for the season.