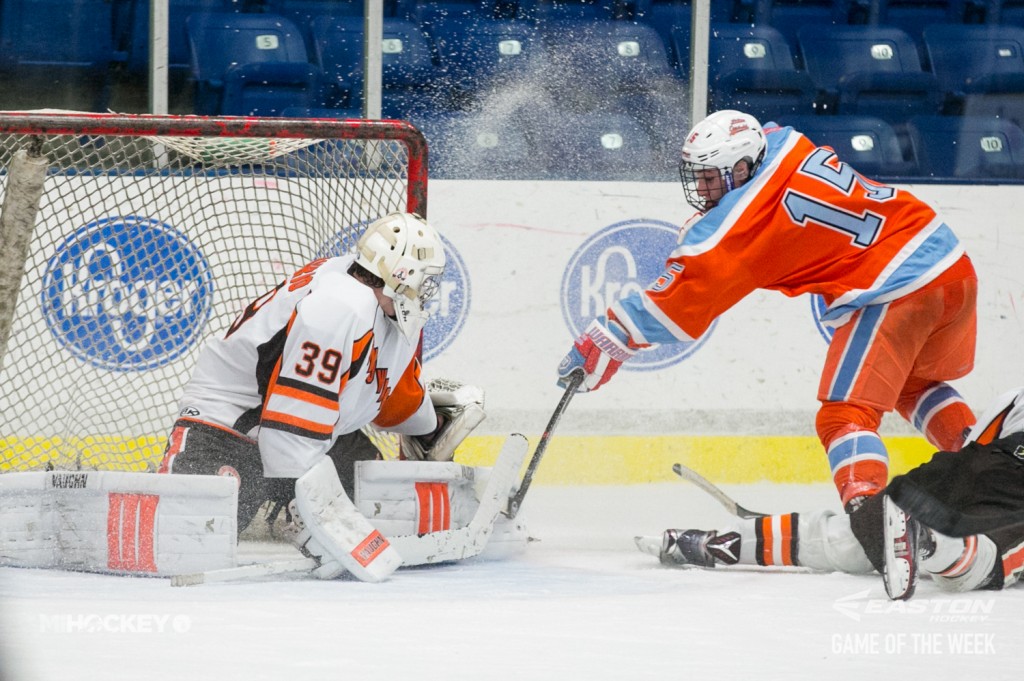 Week 6 MHR Games of the Week

For our Week 6 Games of the Week, we turn our attention to the hockey hotbed of New England where a couple of the fall’s biggest and best showcases are taking place.

The Eastern Exposure hockey group is hosting more than 60 teams in the 2009, 2010 and 2011 age groups at various rinks in northern Massachusetts as part of its American Cup event, while one of the nation’s top college showcase events, the Beantown Fall Classic, is being held at the gigantic New England Sports Center in Marlboro, Mass., and other rinks in the Worcester, Mass. Area.

The Beantown Classic features some of the top 15U, 16U and 18U programs from various parts of the United States as well as NCDC and Tier 3 USPHL junior hockey action.

In addition to those two events, the Exposure Group also is holding an Expsoure Cup for other top teams in the the 2006-08 age groups.

These teams were scheduled to open play Friday, with Windy City taking on the No. 19 Boston Jr. Terriers and Top Gun facing the No. 25 North Jersey Avalanche. The Storm brought a 10-11-3 record into Friday’s action, having outscored its opponents to that point by a 100-83 margin. Top Gun entered the tournament at 7-7-3 and had outscored its foes, 59-43. Windy City came to Massachusetts having gone unbeaten in six of its past seven games after opening the year 5-10-2. Top Gun had posted a 4-3-1 mark in its previous eight outings leading up to the event.

Another American Cup matchup, this one featuring a pair of the nation’s top ’09 clubs, takes place near the Massachusetts-New Hampshire border. Dallas already had played 31 contests, posting a remarkable 28-3-0 record and putting up an amazing 209 goals (6.74 GPG) while allowing just 31 (1.90 GPG) prior to the tournament. The Stars opened play Friday with a 5-3 loss to the fourth-ranked Boston Jr. Eagles. Prior to that they had gone 7-1-2 in their previous 10 outings, with the only loss coming against the second-ranked New Jersey X Hockey Academy. Mid-Fairfield also dropped a tight 4-3 decision Friday against the No. 10 and undefeated Philadelphia Hockey Club, so this will be an important game as the two teams look to hold on to their top-six national rankings. The Rangers had gone 7-0-1 in the eight games leading up to that contest and are now 19-6-4 on the season. They have outscored their opponents, 109-57.

This big 16U matchup is part of the Beantown Fall Classic, one of the nation’s top exposure events for players between the ages of 15 and 20. Compuware opened play Friday with a 3-1 win against No. 25 Phoenix Jr. Coyotes to improve to 15-4-0 on the year. They also will face the No. 13 New Jersey Rockets and No. 3 Long Island Gulls before Sunday’s showdown with the Avs. They have outscored their opponents, 87-34, to date and are 8-1-0 in their last nine contests. North Jersey opened play in Marlboro Friday with a 2-2 tie vs. the 26th-ranked Oakland Jr. Grizzlies. The Avs also were scheduled to face the Little Bruins and North Shore Wings before Sunday’s contest. North Jersey is 9-5-2 on the year and holds an 87-37 scoring advantage over its opponents. The Avs are 5-0-1 in their last six outings.

This should be one of the top matchups of the entire Beantown Fall Classic weekend as a pair of top-5 18U clubs face off. Long Island was a remarkable 24-3-2 entering the weekend with a late game scheduled Friday night vs. the No. 15 Chicago Reapers. The Gulls also are slated to face the No. 13 Chicago Mission Saturday morning before taking on the Bulldogs. Long Island had outscored its opponents, 101-55, before Friday’s contest and had won its previous three contests in overtime against the nation’s seventh, 10th and 17th-ranked teams. Yale entered the Beantown at 16-4-2 after dropping a 5-1 decision to the No. 7 Bishop Kearney Selects in its previous outing. That was the second straight loss for the Bulldogs, who had gone 10-1-1 in the 12 games leading up to those setbacks. They entered the weekend having outscored their opponents, 98-60, and were scheduled to face the Mission on Sunday after Saturday’s tilt against the Gulls.