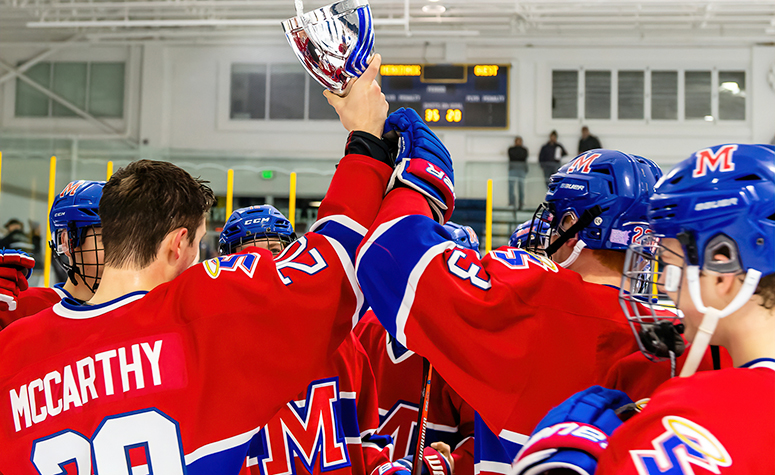 Week 4 MHR Games of the Week

It’s another big tournament weekend for youth hockey around the United States as we inch a little closer to releasing our first Canadian rankings in more than two years at some point in the very near future. Our MyHockey Rankings Week 4 Games of the Week take us to boys’ tournaments or showcases in New Jersey and Michigan.

Over the next few weeks there will be some highly competitive girls’ tournaments and matchups that we will be featuring and that we are very much looking forward to, and of course, as the Canadian rankings take shape, we will be able to determine top matchups in Ontario, Quebec, Western Canada and other locations to north of the border.

This weekend our Games of the Week feature matchups at the 15U and 16U level in the NorthEast Pack as the New Jersey Rockets host a showcase event in Bridgewater, N.J. One of those matchups is our first Games of the Week No. 1 vs. No. 2 showdown of the year as top-ranked Mount St. Charles (Rhode Island Saints) 15U takes on the second-ranked Bishop Kearney Selects.

The CCM Motown Invite in Troy, Mich., provides our 12U matchup as the No. 4 Anaheim Jr. Ducks take on ninth-ranked Little Caesars. Our other featured contest includes a pair of 18U top-13 clubs.

Both of these teams opened play early on Friday with victories as the Ducks knocked off No. 20 Team Illinois, 3-2, and Little Caesars beat No. 15 Wilkes Barre/Scranton, 10-4. With those victories, Anaheim improved to 7-3-4 on the year while LC improved to 9-5-1. Through Week 3, the Ducks had played the toughest 12U schedule in the country, having tied the Nos, 5, 6, 7 and 9 teams while beating the Nos. 2, 14 and 22 clubs. Losses came at the hands of the 12th-, 3rd- and 14th-ranked teams. Anaheim has outscored its opponents, 48-30, and is unbeaten in six of its last seven outings. These two teams skated to a 3-3 tie in a pre-tournament tune-up earlier this week, and Anaheim also earned a 9-4 victory against LC in Texas Sept. 25. Little Caesars is unbeaten in its last three contests and has outscored its opponents, 73-53. LC has a victory against No. 3 Dallas Stars Elite, but also has dropped a pair of games against DSEHC. They also beat the Nos. 14 and 22 clubs.

The Blue Jackets have sprinted out of the gates to an 11-3 record while outscoring their opponents, 72-22, to earn the nation’s No. 2 ranking. They split a pair of contests against the Windy City Storm last weekend and opened the season with seven-straight wins before falling to No. 4 Victory Honda, 3-1, Sept. 19 after beating them, 5-1, the day before. The other loss was a 5-3 decision vs. the Nashville Jr. Predators. The Jackets and Mission faced off Sept. 4, with Ohio skating to a 5-3 victory. That was one of only four losses Chicago has suffered thus far in compiling an 11-4-1 mark and outscoring its opponents, 53-26. Both teams have beaten the Colorado Thunderbirds and Minnesota Blades, and both have beaten and lost to Windy City. They both also have knocked off the Buffalo Jr. Sabres, and the Mission has wins against the Nos. 7 and 12 clubs.

This huge 15U matchup is part of a NorthEast Pack event being hosted by the New Jersey Rockets. Believe it or not these teams have combined to play 63 games already during this young season. Mount St. Charles has a sparkling 16-1-0 record, with the only loss coming against No. 8 Pittsburgh Penguins Elite, 3-1, Sept. 12. They have posted12-straight victories since that setback, running their season goal differential to a plus-74 (110-36). These teams met Sept. 10, with MSC earning a 7-3 victory. Mount St. Charles has wins against the Nos. 5, 10, 13, 14 and 21 teams. The Selects are an astounding 22-3-1 already, with the losses coming against MSC, the No. 30 Minnesota Blue Ox and No. 12 Honeybaked. They bring a seven-game unbeaten streak (6-0-1) into this contest and are unbeaten in 10 of their last 11.

This is another matchup of top-five powerhouses in the NorthEast Pack New Jersey showcase. The Gulls are 15-3-5 and have outscored their opponents, 95-47. They are 8-1-3 in their past 12 contests entering the weekend. The Gulls and Pens Elite met Sept. 11, with Long Island skating to a 5-3 victory. Their losses have come against the fourth-ranked Boston Jr. Eagles and the No. 3 Bishop Kearney Selects, while they have beaten seventh-ranked Mount St. Charles and the No. 8 New Jersey Rockets. The Gulls also tied Bishop Kearney and Boston. Pens Elite is 10-2-0, losing to the No. 11 Buffalo Jr. Sabres in their most recent outing in addition to the Gulls. The Jr. Sabres loss ended an eight-game winning streak. Pens Elite owns victories against the Nos. 6, 7 and 8 teams.