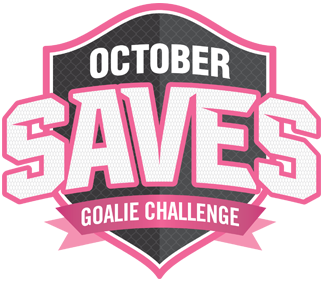 Stronger Than Ever Despite Challenging 2020, October Saves Ready to Roll in 2021

The hockey community is excited about everything it seems.

As rinks all over North America finally spring back to life after a crazy and uncertain 18 pandemic-ravaged months, the excitement among the players, coaches and families involved with the sport is palpable. That excitement appears to be a great omen for the October Saves fundraising program.

October Saves has raised more than $1.5 million toward the fight against breast cancer since officially becoming a non-profit organization in 2017, and even though this year’s Oct. 1 start date looms later this week, the hockey community already has stepped up.

“We would just like to start things off with a huge thank you,” said October Saves Founder Lara Hopewell “We've already raised more than $40,000 and it's not even October. People are excited and we are too!”

That fast start, combined with creative approaches adopted under unusual circumstances last fall that will be implemented permanently this year – along with some other new twists – has Hopewell looking forward to a possible record-breaking campaign in 2021.

The addition of new prizes for the top fundraisers and the ability for clubs to support their goalies’ fundraising efforts also should help boost the numbers. Hopewll also believes the addition of a well-known charitable organization to the list of the October Saves’ beneficiaries will spark interest and grow support throughout New England.

“We definitely expect to pass the half-million dollar milestone and hopefully head straight to that million-dollar mark,” she said. “We know our goalie nation can do it. We've added the Dana Farber Cancer Institute’s Jimmy Fund to our list of incredible beneficiaries. We know many of our fundraisers in New England will be personally inspired to fundraise for this organization.”

Surpassing $500,000 in fundraising seems like a given after the program generated $410,000 in donations last year despite the uncertainty surrounding everything created by the COVID-19 outbreak. Last July, no one really knew if we would have a hockey season at all, and if so, what it might look like or when it might begin. There were legitimate questions as to whether teams even would be playing in October.

As the summer wore on it became clear that some areas of North America would try to start their seasons on time, some seasons would be delayed, some leagues didn’t even know if or when tryouts might be held, some teams would only get to skate in small groups and there might be no hockey at all in some regions.

Hopewell wasn’t sure what the short-term future might hold for her organization.

“We honestly had no idea what to expect, so we didn't set a number for 2020,” she said. “In our minds, any dollar amount would have been amazing, and our beneficiaries would have been thrilled to receive anything. To raise the second-highest yearly total in our history during a pandemic was amazing. We definitely attribute the success to the ‘All Saves, One Goal’ campaign, which removed all barriers to making saves for our participants and their families. As we know, goalies are a resilient, fearless bunch and boy did they prove it.”

Initially intended to be a way to keep the October Saves program operational during the pandemic, the “All Saves, One Goal” campaign turned out to be a huge success that allowed players all over the continent to raise money whether their teams were on the ice or not. The program literally allowed goalies to count any saves made anytime, anywhere.

“All Saves, One Goal is here to stay, Hopewell said. “It was so successful last year, and it allowed states like Minnesota and organizations like the prep schools, who don't have games until November, to participate.”

The new approach allowed goalies to count saves made during the month of October even if their teams weren’t playing. Make a save in practice? Count it. Not practicing? No sweat. If you make a save playing ball hockey or in your basement, add it to the total. Not a hockey player? No worries. If you make saves playing video games, those count as well.

“We loved our NHL video-gamer army, too, who showed up in force last year and fundraised together with The Goalie Guild,” Hopewell said. “It was such a cool, new angle and we were happy to have them.”

The Goalie Guild is a “non-profit organization dedicated to educating, inspiring and supporting hockey goalies and goalie coaches across the globe.” Nearly all donations to the organization are directed into the goalie community through annual charitable programs and training scholarships. Goalie Guild Gaming is a non-profit organization dedicated to supporting the growth of NHL Esports by “offering education, training, and mentoring opportunities for goalies of all ages and levels.”

A longtime supporter of the October Saves program, The Goalie Guild held an online streaming event on Twitch last October to benefit October Saves and coincide with the launch of EA Sports’ NHL ’21 game. Gamers anywhere also were afforded the opportunity to count virtual saves toward their fundraising goals.

Each of those opportunities to make saves and raise money will continue to be part of this year’s campaign. On top of that, Hopewell said that clubs will be able to participate and support their goalies’ efforts.

“We are super excited about the functionality we added for this year,” she said. “For 2021, clubs and organizations can fundraise together with their goalies. Clubs can register their group and add their registered goalies. We will have club rankings on the site and will be awarding the top tundraising club a Sense Arena Virtual Goaltending Training System with a one-year subscription.”

That prize, valued at $3,000, is one of many ways goalies and clubs are incentivized to participate in the fundraiser. Clubs interested in participating can click on this link for the October Saves website and scroll through a video that walks them through the registration process on the home page.

“As we all know, it’s more exciting to fundraise together,” Hopewell said.

This year’s individual prizes include a pair of True goalie skates for the top fundraiser along with leg pads, a goalie mask, a glove and blocker and a stick for other top producers. Prizes also are awarded automatically whenever goalies surpass certain fundraising thresholds.

“We have majorly beefed up and updated the prizes for this year,” Hopewell said. “We have five top prizes to be awarded to goalies in both the U.S. and Canada; in the past, we had three. We also increased the fundraising-milestone prizes, so there are more opportunities for everyone to be rewarded for their amazing efforts.”

Started in 2014 with all 28 of the goalies in the Ashburn (Va.) Xtreme youth hockey program participating, October saves expanded into Canada three years ago and continued growing the past two years. That first year, Ashburn’s goalies raised $32,000 on their own.

The numbers improved substantially in year two, with NHL goaltending coach Mitch Korn donating a spot in one of his goalie camps as a prize, and eventually the Chesapeake Bay Hockey League, which includes pretty much all Tier 2 travel programs in Maryland, D.C. and Virginia, began supporting the program. Then USA Hockey got on board.

In addition to the Jimmy Fund, October Saves has aligned with organizations in the. U.S. such as the Invoa Schar Cancer Institute in Virginia, Children’s Hospital of Philadelphia and Stand Up to Cancer. In Canada, October Saves partners with Children’s Hospital of Eastern Ontario, which funnels funds to reputable organizations all over the country.

The program runs throughout the month of October, which is Breast Cancer Awareness Month, and there still is time to sign up. Anyone interested in participating can register and find out more by CLICKING HERE.