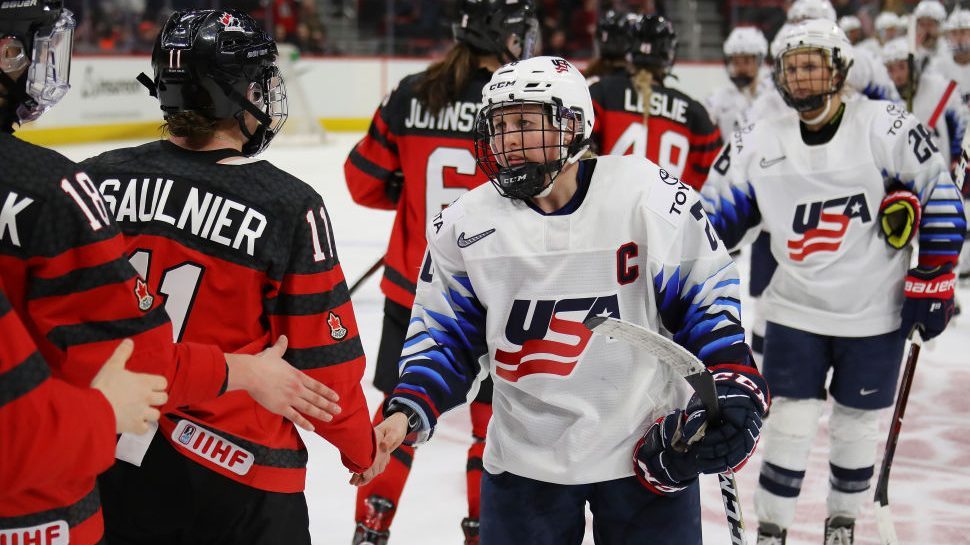 The Wait is Finally Over for the World

When the puck drops today, finally, on the 2021 International Ice Hockey Federation Women’s World Championship, it will have been 859 days since the last official women’s hockey international competition.

What a roller-coaster ride those 859 days have been for the players and coaches.

Imagine working all your life to reach the pinnacle of your sport, earning the opportunity to represent your country on an international stage and having to wait more than two years to realize that dream. Or being a veteran player who has had the opportunity to play at that level before but whose window may be shutting quickly.

So much can change at the top level of a sport in a span of nearly 900 days. Father time is undefeated, as they say, and there’s always a group of up-and-coming talented players looking to push the vets out and get their chance to shine.

To make it worse, no one suspected when the 2020 WWC was canceled because of the global pandemic that the 2021 event might be in jeopardy, too.

After all, the NHL held its playoffs in a bubble last summer and then this year completed a 56-game schedule and a full slate of playoff games. Spectators even were admitted to NHL games late in the regular season and during the postseason. The NCAA crowned men’s and women’s Division I hockey champions, with fans also eventually being allowed to attend games, and on the international side, the IIHF managed to crown a men’s world champion and complete the 2021 World Junior Championship.

Players continued their preparations for the May tournament whether they had to work out on their own or were able to play for their professional or college teams. National-team training camps opened, and it appeared as though everything was on track as the Women’s Worlds approached.

Then, just as the roller coaster finally seemed to be griding to a halt after a stomach-churning ride of more than 700 days, someone hit the throttle and took the players and coaches through another series of gut-wrenching twists and turns.

A day before teams were scheduled to arrive and begin their required quarantines, the government of Nova Scotia announced that it would not permit the WWC to be played, and for the next week or so it looked as though another year might go by without a women’s international hockey tournament being held.

That decision created quite an uproar throughout the hockey world given all the opportunities that had been provided on the men’s side, and by April 30, amid great public outcry, it was announced that the event would be held somewhere in Canada Aug. 20-31.

While the announcement sent waves of relief throughout the hockey world, the initial decision to cancel didn’t sit well with the players, many of whom voiced their concerns via their various social-media accounts.

“The cancellation of the Women’s World Championship at the last minute this week was just another reminder that women’s hockey continues to be treated as an afterthought,” longtime Team USA superstar Hilary Knight, one of the international faces of the sport, posted on social media. “The health and safety of the people of Nova Scotia is, and must be, the top priority. However, to cancel this critical event so close to its start with some teams en route to the site to begin an eight-day quarantine process — and provide no other option — is incredibly disappointing.”

So, after waiting more than 700 days between world-championship tournaments, the players were asked to wait a few more months. Then, after waiting – and then starting training camp yet again – there was a seven-day quarantine before teams were allowed to travel to the new host site in Calgary.

Oh, and upon arriving in Canada the players had to spend five days in hotel isolation before they could rejoin their teammates and get back on the ice.

It was enough to make some of the players desperately search for creative ways to pass the time – and stay in shape.

Finally, on Aug. 16 after more than 1,000 negative COVID tests for the participants, team staff members and event organizers, the teams were given the green light to get back together and resume preparations for the tournament, which was set to begin just four days later at WinSport Arena at Calgary Olympic Park.

The following day teammates were able to have breakfast together, to attend team meetings and to once and for all get back on the ice.

“It’s only been five days that we were inside, but it feels like a week for sure,” Team Canada veteran star forward Melodie Daoust said on a Hockey Canada team video.

Canadian veteran goaltender Ann-Renee Desbiens was eager to get back to work but had to be patient for a few more hours.

“The first thing I wanted to do for sure was play hockey,” she said, “but that’s going to have to wait a little bit. We’ll be on the ice a little later today, but it was nice just to get to have breakfast with people, to have discussion. We all got there a little early. We all stayed a little longer. It just shows how much we miss each other.”

And what’s a few more hours – or even a few more days – after waiting nearly 900 days for the opportunity to represent your country again?

Well, the waiting finally ends today when the puck drops at 2 p.m. Eastern Time for the first game of the 2021 Women’s World Championship between the Czech Republic and Denmark. Tuesday’s team practices were followed by two days of pre-tournament games, but today it all gets real, and the stakes are raised as preliminary-round contests get underway in Calgary.

“It’s hard to describe just how amazing it feels to play a game,” United States Head Coach Joel Johnson said following his team’s 6-0 exhibition victory against Russia Wednesday. I think you could feel the excitement from every player just to get back out on the ice in a game situation … I’m really excited to see what this team is capable of doing going forward in this tournament. We’re going to enjoy it today, and then we’re back at it tomorrow getting ready for Switzerland.”

That game Friday against Switzerland is the third and final contest of Day 1. It faces off at 9:30 p.m. ET and can be seen live, along with all of the other U.S. games, on the NHL Network in the United States.

The Canadians look to avenge their semifinal upset loss to Finland at the 2019 WWC in the second opening-day game at 6 p.m. ET. All of Canada’s games can be viewed on the NHL Network, TSN and RDS, with TSN showing all 31 tournament contests in Canada and the remaining games not featuring the U.S. or Canada available via web stream on ESPN+ in the United States.

Sweden and France currently are the ninth- and 10th-ranked teams, but they did not qualify for the cancelled 2020 tournament and will have to sit this one out. Because no other women’s international tournaments will be held this year, none of the 2021 participants will be relegated.

Czech Republic, which appears to have the deepest team in Group B and the most realistic chance of making a run to the semifinals, will face its stiffest competition from Japan. Denmark is making its first appearance in the top IIHF Women’s World Championship division since 1992 after capturing the Division 1 Group A gold medal in 2019.

While the United States is the favorite based on its recent success in international tournaments, which includes winning the gold medal at the 2018 Olympics, every matchup between the Americans and Canadians seems to turn into an epic instant classic.

The last time the two countries met, nearly 600 days ago in front of more than 13,000 fans in Anaheim, Calif., it took a Megan Bozek overtime goal for the U.S. to earn a Game 5 Rivalry Series victory. The Americans won that series, three games to two, with three of the contests being decided by one goal, two going to overtime and another being decided by a pair of scores.

While these two teams have dominated the international hockey landscape – they have played each other for the gold medal in every WWC except in 2019 and every Olympics except 2006 – Finland is breathing down their necks after upsetting Canada and earning the silver medal at the 2019 WWC. And don’t forget that the Finns were a disallowed overtime goal away from claiming the 2019 gold medal on home ice before ultimately falling to the U.S in a shootout.

Finland again appears to be a serious threat to knock off one of the reigning superpowers in Calgary, but the Finns will have to do so without their top goalie, Noora Raty, who did not make the trip. Raty turned aside 93 shots over two days in the 2019 semifinals and finals to nearly lift her team to a miracle gold medal.

Canada and the U.S. also will be without some familiar faces, though, and both countries are entering a bit of a transition phase as some of the sport’s pioneers and top players conclude or near the end of their careers. The Canadian roster features eight players making their first world-championship appearances, while the Americans welcome 10 new faces.

One of Canada’s first-timers, Sarah Fillier is a 2000 birthyear who has scored 114 points in 60 NCAA games for Princeton. The U.S. boasts three 2002 birthyears, including defender Caroline Harvey, who will be attending Wisconsin and has yet to enroll in college.

Gone from the United States roster are recently retired players such as longtime captain Meghan Duggan, defender Kacey Bellamy and 2018 Olympic heroes Jocelyne and Monique Lamoureau. But many of the sport’s top names such as Knight, Brianna Decker, Kendall Coyne-Schofield, Amanda Kessel and Alex Carpenter once again will don the red, white and blue.

As usual, Canada boasts similar star power and depth, with the likes of Natalie Spooner, Daoust, Marie-Philip Poulin, Brianne Jenner, Renata Fast and Sarah Nurse back in the fold.

The Canadians may have the edge in goal but will need to sure up their defensive play as a few younger faces take on larger roles. And as all hockey fans know, goaltending often makes the difference over the course of a long, closely contested tournament.

Not having arguably the world’s top netminder in goal will make a repeat performance by Finland that much more difficult, but the Finns have two of the greatest players in the sport’s history on their roster in defender Jenni Hiirikoski and forward Michelle Karvinen.

Hiirikoski has been named the Women’s World Championship top defensive player seven times, and Karvinen has averaged nearly a point a game in 63 career WWC contests. Those two expect to get a boost from 19-year-old scoring sensation Elisa Holopainen, the reigning scoring champion and MVP in the top Finnish professional league.

Following the Day 1 matchup between Canada and Finland, the most-anticipated games of the tournament will be when the U.S. takes on Finland Aug. 22 at 9:30 p.m. ET and Canada Aug. 26 at 6 p.m. ET.