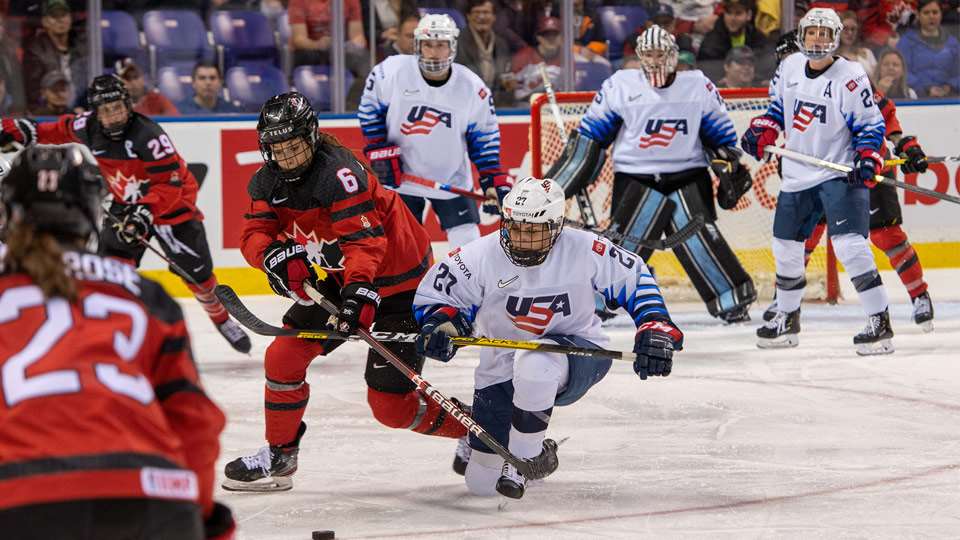 Womens World Championship: The Best Story of All is That They're Playing

Has there ever been a sporting event with more storylines than the upcoming International Ice Hockey Federation Women’s World Championship?

It’s the first international women’s hockey event in nearly 900 days since the 2019 WWC in Finland. The 2020 World Championship was canceled because of COVID, and this year’s event was pushed back from April to August and moved from Nova Scotia to Alberta.

The United States and Canadian women’s national teams will take the ice to compete for the first time in more than 500 days, dating to the final game of the 2019-20 Rivalry Series between the two nations. That game was won by the U.S. in overtime on a goal by Megan Bozek in front of 13,320 fans, the largest crowd to attend a women’s game in the United States, at the Honda Center in Anaheim, Calif.

Canada is looking to bounce back from its poorest showing ever at the Women’s World Championship. The Canadians were upset by Finland, 4-2, in the 2019 semifinals, setting up the first gold-medal game featuring a team other than the United States or Canada.

They went on to win a bronze medal, but that isn’t good enough for a team that has captured more world-championship gold medals (10) than any other and had never finished worse than second. On top of that, Canada has not won gold at the WWC since 2012 and has not won the tournament on home ice since capturing gold in Winnipeg in 2007.

The United States seeks its sixth consecutive World Championship gold medal, it’s ninth in the past 10 years and its 10th overall. A 10th gold would tie the U.S. with Canada for the most all time.

Finland, which for years has been considered the third-best team in the world, looks to solidify its reputations as a permanent threat to rank among the top two with another strong showing after upsetting Canada before nearly knocking off the U.S. in the 2019 gold-medal game. The Finns appeared to have won the gold on an overtime goal by Petra Nieminen that ultimately was overturned after a controversial video review, setting up an American shootout victory.

Finland has competed in all 19 Women’s World Championships and is the only nation other than Canada or the United States to capture anything other than a bronze medal. The Finns rank third all-time in medals won with one silver and 12 bronze medals.

Their road may be even more challenging than usual this year, however, as goaltender Noora Raty, the star of the 2019 WWC who stopped 93 Canadian and U.S. shots over two days to nearly pull off the miracle, is not with the team in Calgary. Finland likely will turn to capable 31-year-old “backup” Meeri Raisanen, also considered one of the world’s top netminders.

Raty is not the only notable former WWC heroine who will be absent in Calgary at this year’s WWC. A shift has begun in women’s hockey with the recent retirement of several longtime sport ambassadors and superstars and the emergence of so many up-and-coming younger, talented players around the world.

This shift represents a natural and necessary progression for a growing sport as some of the game’s pioneers have taken a bow and ridden off into the sunset. But this year it also has been facilitated by the IIHF’s decision to allow teams to roster 25 players instead of the usual 23 because of the COVID protocols that will be maintained during the tournament. Now teams can bring some of their younger players along for the trip to provide them with experience as well as veteran mentorship on and off the ice.

Likewise, the Canadian contingent includes familiar names such as Natalie Spooner, Brianne Jenner, Marie-Philip Poulin, Melodie Daoust, Renata Fast and Sarah Nurse, but also welcomes eight WWC newcomers. One of those first-timers is 2000 birthyear Sarah Fillier, a rising star who already has played in an Olympics and scored 114 points in 60 NCAA games playing for Princeton.

Seven-time WWC top-defender selection Jenni Hiirikoski returns for Finland, but Elisa Halopainen is a 19-year-old phenom who averaged more than 1.5 goals per game in the Finnish professional league to capture the scoring title with 64 points in 25 contests and earn league MVP honors. She outscored the next-closest players to her in scoring by more than 20 goals and points.

For Switzerland, Alina Mueller seems like she’s been around forever, but she is just a 23-year-old 1998 birthyear who already has competed in three world-championship tournaments and notched 13 points in 12 games spread over two Olympic appearances. She has 155 points in 100 career games playing at the NCAA Division I level for Northeastern.

Mueller is joined by high-scoring veteran 27-year-old forward Lara Stadler, who recorded a mind-boggling 82 points in 36 games in Sweden’s top professional league, on the team’s top line. They will rely on the support of youngsters such as 18-year-old Laura Zimmermann, who scored four goals in five games at the 2020 U18 World Championship, in hopes of rebounding from an 0-5 2019 WWC and moving ahead of Russia in the international rankings.

No one will be relegated to a lower division because of a poor showing this year since COVID has prevented the lower-level championship events from being played, but one of the teams from Pool B – most likely Czech Republic, Germany, Hungary or Denmark – probably will be replaced by China for the 2022 Beijing Olympics in February.

Speaking of Denmark, the Danes are making their first WWC appearance in the top division since 1992. Defender Malene Frandsen was on the Danish team that advanced out of Group B to Division I Group A in 2012, and after seven years as a team member, she was able to help lead them back to the top division for this tournament.

“We are wo excited,” she said in an IIHF preview story. “We have a feeling that we have nothing to lose, we just have to empty the tank and just do our best. We just have a feeling on the Danish National Team that we keep raising the standards; we keep getting better.”

And speaking of the Olympics, of course 2022 is an Olympic year, so most of these teams will be competing on an even larger stage in Beijing come February. Normally this tournament would be considered somewhat of a warm-up for that event, but given the unusual circumstances this year, that simply is not the case.

Canada wants to get back on track after the disappointing showing in 2019 and watching the U.S. skate away with the gold at the 2018 Olympics. The United States wants to continue its dominance of the WWC and build momentum heading into the China games. And neither country wants to give Finland a permanent seat at the table.

The most important storyline of all, however, following the cancellation of the 2020 Women’s World Championship, the postponement of this year’s tournament and everything else we’ve all been through the past 18 months, is that international women’s ice hockey is back. Every one of the 250 competing players is thrilled to have the opportunity to get back on the ice and represent her country playing the sport she loves.

“This makes you realize why you do this, why you love it so much,” said Poulin, Canada’s team captain. “We want to win the World {Championship} for sure. It’s something we’ve been working toward for a long time.”

United States Head Coach Joel Johnson talked about the feeling on his bench for Tuesday’s pre-tournament game against Russia.

“It’s hard to describe just how amazing it feels to play a game,” he said in a USA Hockey release. “I think you could feel the excitement from every player just to get back out on the ice in a game situation … I’m really excited to see what this team is capable of doing going forward in this tournament. We’re going to enjoy it today and then we’re back at it tomorrow getting ready for Switzerland.”

The 2021 IIHF Women’s World Championship gets underway Friday, Aug. 20, with all games being played in WinSport Arena at Canada Olympic Park in Calgary. Czech Republic faces Denmark at 2 p.m. Eastern time in Friday’s opening matchup. Canada takes on Finland in a huge opening-day tilt at 6 p.m., with the U.S. playing Switzerland at 9:30 p.m.

The tournament includes 10 teams competing in two pools and 31 total games. Japan joins the previously mentioned teams in Pool B, while Pool A is comprised of the United States, ranked first in the world, No. 2 Canada, No. 3 Finland, No. 4 Russia and No. 5 Switzerland.

All games played by the United States and Canada will be televised by the NHL Network in the U.S., while north of the border RDS will broadcast all of Canada’s games plus the playoff rounds and TSN will show all preliminary-round games as well as the quarterfinals, semifinals and medal-round contests. Games not including the United States or Canada are being streamed in the U.S. on ESPN+.

The full tournament schedule can be found by CLICKING HERE.

Click the links below for some other IIHF Women’s World Championship resources:

Team USA Updates from the WWC

Team Canada Updates from the WWC