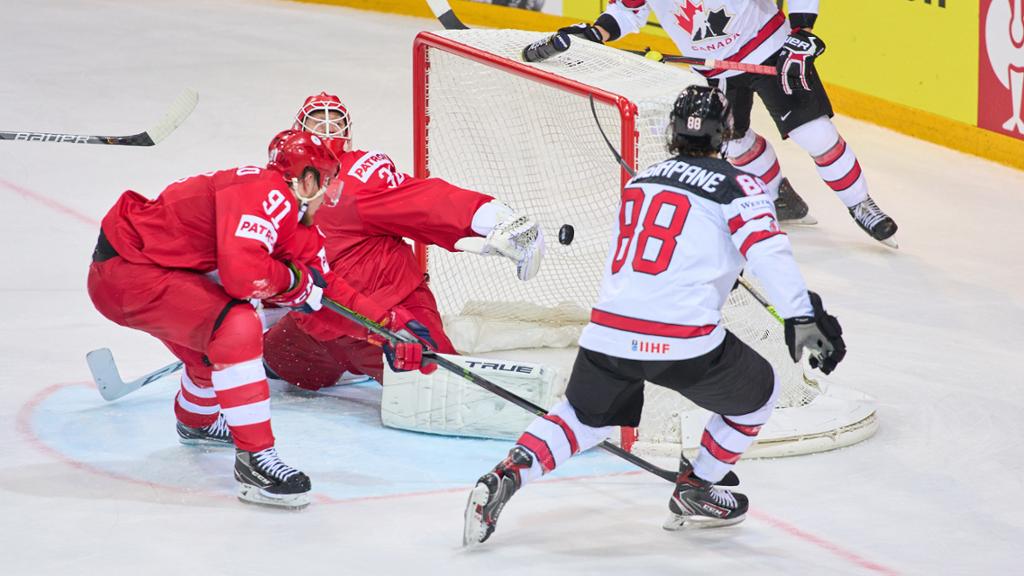 In our second MYHockey Rankings Teachable Moment, we pull a clip from Team Canada’s remarkable recent run to the IIHF Men’s World Championship.

In a great example of vision, awareness and skill by both Andrew Mangiapane and Troy Stecher, Canada manages to score in 3-on-3 overtime to upset Russia in the semifinals and advance to the Gold Medal Game. Both players make smart, skilled plays to set up the game-winning opportunity, but the Russian defender still nearly makes the game-saving play. We also show you how even at the highest level of the game sometimes the pros don’t handle similar situations properly and don’t convert what should be easy goal-scoring opportunities.

In the first clip, Mangiapane avoids the common mistake of admiring his pass, "flying by" the net or getting too deep after making a pass in transition against Russia. He doesn't stop skating and watch his pass, and he doesn't keep skating to nullify his team's offensive advantage. Instead, he enters the zone with speed and takes the puck wide in the 3-on-3 overtime situation, then after beating the first defender, who doesn't move his feet, he lays the puck off for Troy Stecher, his wide-open trailer.

Instead of watching the puck after the pass or drifting to a position where he's too deep to be a scoring threat, Mangiapane cuts across the slot, opens up for a pass to his forehand and finds a soft spot in the defense. Stecher makes a highly skilled play, holds the puck until a passing lane opens and puts it on Mangiapane's tape for the GWG.

Contrast that to Mika Zibanejad, who in the second clip opens up nicely for a return feed after making an initial 2-on-1 pass, but drifts too far off the angle to be able to finish into an open net. His momentum carries him almost to the goal line and pulls the puck to the left as he hits the post with his shot despite having a wide-open goal to shoot at. Had he stopped as soon as he opened up instead of drifting, this would have been an easy goal for him.

Going forward it is our goal to provide a series MHR Teachable Moments, which we hope will help hockey players of all ages and ability levels develop a deeper understanding of different plays that happen frequently and allow them to make better decisions naturally and quickly under game conditions. We will use NHL video clips as well as clips from events such as the IIHL Men’s World Championship, the Women’s World Championship, the World Junior Championship – and also from college and high-level junior hockey – to help illustrate many different plays and situations that arise during the course of most hockey games.