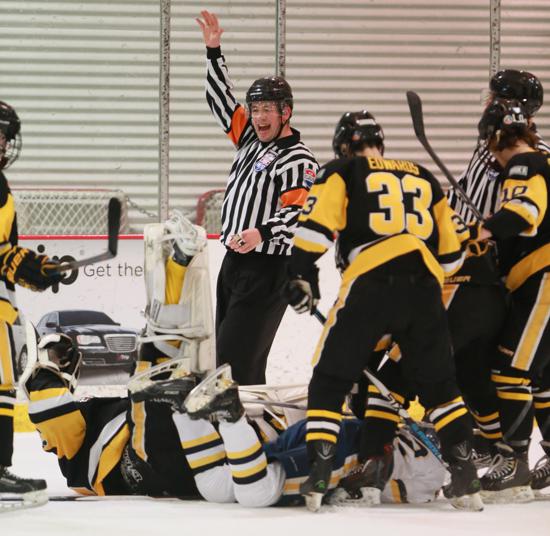 The Week 20 schedule is highlighted by a boys’ showcase based out of Youngstown, Ohio, which features 11 teams ranked among our MyHockeyRankings.com top 10 competing across three age groups.

Play continues throughout the weekend, and most games can be seen live or on demand at www.Livebarn.com. The weekend’s marquee matchup takes place Saturday at 6 p.m. when the nation’s top-two 16U Tier 1 boys’ teams, No. 1 Pittsburgh Penguins Elite and the second-ranked North Jersey Avalanche, face off on LiveBarn from Center Ice Arena in Delmont, Pa.

A top 14U girls’ Tier 1 matchup also will take place outside of Philadelphia this weekend as No. 6 Little Caesars from Detroit travels to the East Coast to take on the No. 7 Philadelphia Jr. Flyers at Ice Line in West Chester, Pa., Saturday at 10:15 a.m. That contest can be seen on LiveBarn, and Little Caesars also will face eighth-ranked Pens Elite in a pair of games that on LiveBarn while in the Philly area. Those two games are Saturday at 1:45 p.m. and Sunday at 12:45 p.m. In addition our Week 20 Games of the Week feature a matchup of the fifth- and sixth-ranked girls’ 19U teams.

The top-two USA 16U Tier 1 boys’ teams face off Saturday as part of the Youngstown SuperSeries AAA Showcase in Pennsylvania. Pens Elite brought a 23-4-1 record into the tournament, which started Friday, and had outscored its opponents, 108-47, allowing fewer than two goals per outing. They had won four straight games before splitting a pair of one-goal decisions against the No. 6 New Jersey Rockets last weekend. In the four games prior to last weekend, Pens Elite defeated the Nos. 9, 16, 21 and 6 teams. They also split with the Rockets Jan. 23 and 24. Pens Elite won 14 of its first 15 contests to open the season and has gone 9-3-1 since. They have held 16 opponents to one goal or fewer. This will be their first meeting with the Avs, who entered the weekend with a 26-3-2 record and having outscored their opponents, 157-57. North Jersey saw a 10-game winning streak snapped last weekend in a 6-1 loss to the fifth-ranked Bishop Kearney Selects. That streak included three overtime victories and one shootout win. In addition to the loss to the BK Selects, the Avs only other losses came against No. 8 Seacoast Performance Academy and the Np. 6 Rockets. They opened the year with a nine-game unbeaten streak and have gone 17-2-1 since.

Mount St. Charles Hockey Academy (Rhode Island Saint M’s) and Pittsburgh Penguins Elite face off in a top-10 Tier 1 14U matchup Saturday in Pennsylvania as part of the Youngstown SuperSeries AAA Showcase. This is just the eighth game for MSC since the team returned to action after more than two months off on Jan. 30. MSC has gone 6-2 in those contests, winning six straight before dropping a pair last weekend against the second-ranked Bishop Kearney Selects and the No. 13 Buffalo Jr. Sabres. In the six games leading up to those losses, MSC outscored its opponents, 34-7. They were 13-1-0 on the year prior to last weekend’s setbacks and have outscored their opponents 100-28. Pens Elite brings a 16-6-2 record into the weekend and is riding a four-game winning streak since a 2-1 loss to No. 20 Honeybaked Jan. 30. They beat Honeybaked, 4-0, the day before that and are 5-4-1 in their last 10 outings after starting the season 11-2-1. Pens Elite has outscored its opponents, 86-43, holding its last four foes to a single goal in each contest and limiting 11 opponents to one goal or fewer overall.

Little Caesars heads East this weekend to take on the nation’s seventh- and eighth-ranked teams just outside of Philadelphia. They were scheduled to face the Jr. Flyers Friday in addition to Saturday’s contest and also will take on No. 8 Pens Elite twice before going home. All of the games can be seen on LiveBarn. LC brought a 20-8-3 record into Friday’s contest after splitting two games against Pens Elite last weekend. They are 1-2 in their last three outings, also falling to the 12th-ranked Chicago Young Americans to halt a three-game winning streak Jan. 17. Little Caesars has had a couple of long COVID-related breaks this year, having played just nine times since Nov. 9 after compiling a 16-4-3 record to start the season prior to that date. They have outscored their foes, 105-50, for the season and recorded eight shutouts. Philadelphia enters the weekend 20-6-1 and holding a 98-29 scoring advantage over their opponents. This will mark the Jr. Flyers’ first games against an opponent other than Pens Elite since Nov. 14 as they have faced their rivals from Pittsburgh nine times during that span, including six games since returning to the ice following a long break Jan. 16. Philly has gone 5-3-1 in those nine outings, but 0-2-1 in the last three. The Jr. Flyers won 12 straight games, nine by shutout, to open the season and have gone 8-6-1 since.

The two top 19U Tier 1 teams in Michigan, who also happen to be ranked among the nation’s top six, face off for the second time this week Saturday afternoon in Farmington Hills, Mich. Belle Tire skated to a 1-0 victory over Honeybaked Thursday in the second meeting of the two programs this season. Honeybaked won the Nov. 15 matchup by a 5-0 score before both teams had a long break because of state COVID-19 restrictions. Since returning to action Jan. 8, Honeybaked has gone 9-3, with the other two losses coming against 10th-ranked North American Hockey Academy and No. 29 Gilmour Academy. Honeybaked also beat and tied NAHA last weekend, 3-1 and 3-3. Those results, paired with the loss to Belle Tire Thursday, leave Honeybaked with a 26-10-5 record entering Saturday’s rematch against BT. They have outscored their opponents, 139-65, and have recorded victories against the Nos. 5, 9, 10, 12, 15, 17, 19 and 25 teams. Belle Tire is 21-5-5 and has outscored its opponents, 85-39, following Thursday’s victory. That win marked BT’s 10th shutout of the season, and they have held their opponents to one goal or fewer 21 times. Only three of their opponents have recorded more than three goals in a game. Belle Tire has only played six games since its Nov. 15 loss to Honeybaked, returning to action after nearly a two-month layoff Jan. 22 and going 3-1-2 since. The lone loss in that stretch was a 1-0 decision against the No. 7 Bishop Kearney Selects Jan. 24. Belle Tire also split with No. 10 NAHA, tied the 12th-ranked Jr. Flyers and beat No. 25 Pittsburgh Penguins Elite. They skated to a scoreless tie against second-ranked Shattuck St.-Mary’s Oct. 18 and have recorded victories against the Nos. 3, 10, 15, 16, 18, 20 and 25 clubs.