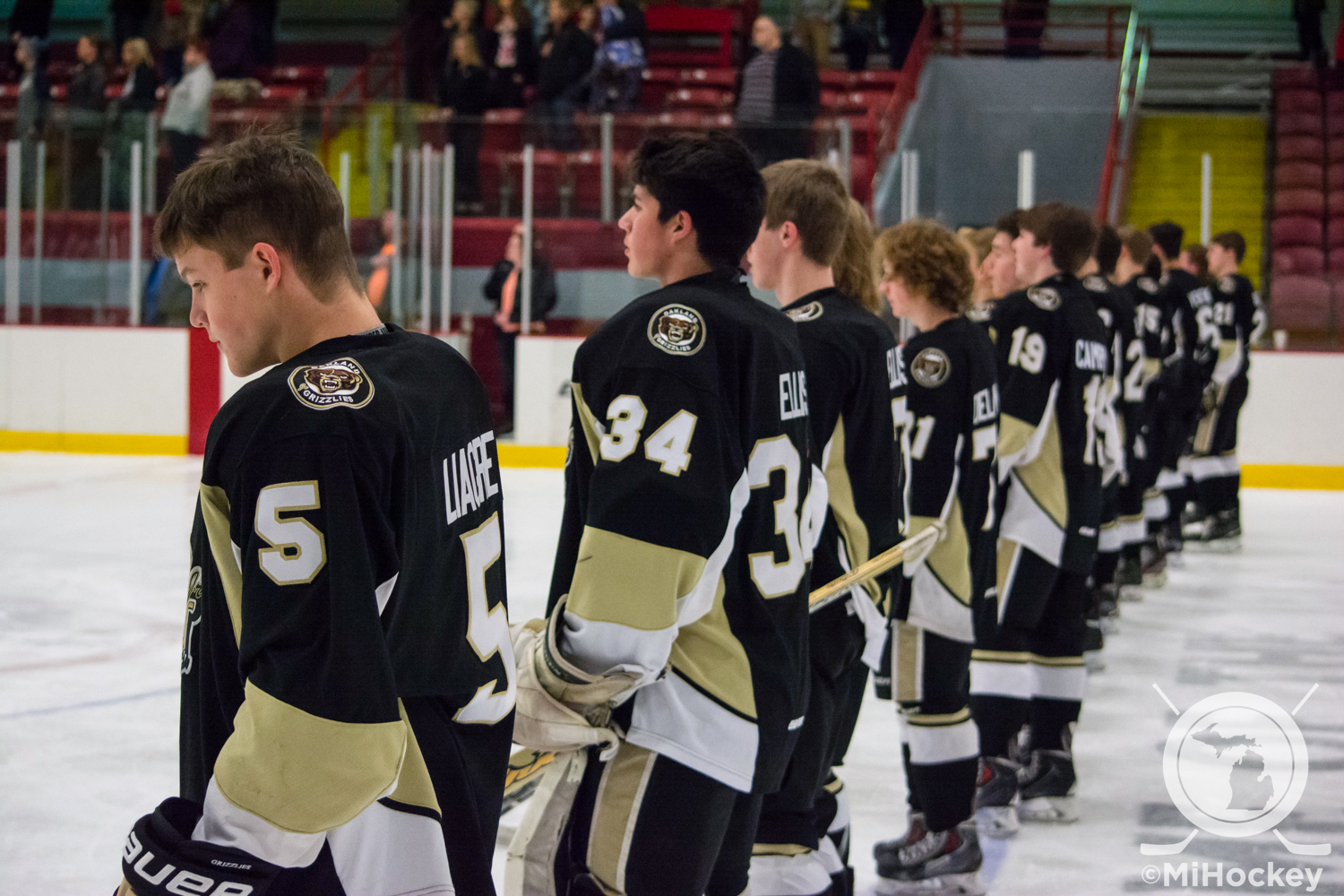 Presidents’ Day Weekend in February traditionally is one of the biggest weekends for youth hockey tournaments all over North America. With more teams being allowed to play games seemingly every week as COVID-19 restrictions ease, this year is no exception.

After a sporadic schedule brought on during the latter part of 2021 by the continued spread of the coronavirus, our partners at MYHockey Tournaments are running tournaments for all age groups in eight locations around the United States this weekend, including Charlotte, N.C.; Charleston, S.C.; Tampa, Fla.; Hampton Roads, Va.; Provo, Utah; Washington, D.C.; Philadelphia, Pa.; and Pittsburgh, Pa.

In addition, two of the nation’s top boys’ showcase leagues – the Tier 1 and 2 North American Prospects Hockey League (NAPHL) and the Tier 1 Elite Hockey League T1 EHL) – are holding their playoffs this weekend, providing us with several of our Week 18 featured matchups, while the ATC Presidents’ Day Classic in Pittsburgh has a stacked 16U AA division that gives us our fourth game of the week.

Our LiveBarn featured MYHockey Rankings Game of the Week actually comes from the ATC event, which is being held at Alpha Ice Complex, as the Oakland Park Grizzlies, the nation’s second-ranked 16U Tier 2 team, take on the No. 11 Montgomery Blue Devils from Maryland Saturday at 8:10 a.m. That tournament, featuring many age groups and levels of play, can be viewed in its entirety at www.LiveBarn.com.

The NAPHL 18U Tier 2 Dixon Cup playoffs feature no fewer than 10 of the nation’s top 27 teams facing off all weekend in Texas and provide us with Sunday’s MHR Game of the Week matchup between the No. 11 Tri-Valley Blue Devils and the No. 2 Highland Park Falcons. On the Tier 1 side in the NAPHL Playoffs, the nation’s top-ranked 18U team, Shattuck-St. Mary’s, faces No. 14 CarShield Friday night, while the Tier 1 EHL brings us a great 18U AAA matchup between No. 12 Dallas Stars Elite and the 13th-ranked St. Louis Junior Blues Saturday in Colorado.

This is one of the top matchups in a Steel City tournament featuring five of the nation’s top-20 16U AA boys’ teams. The Blue Devils are the only team to have knocked off top-ranked Ashburn (47-5-1) twice, and now they get a third crack at the No. 2 Jr. Grizzlies from Michigan. Oakland entered the tournament 28-6-2 for the year and holding a 149-43 scoring advantage over its opponents. The Junior Grizzlies come into the weekend having won six straight games, including a 6-2 victory over top-ranked Ashburn last weekend. They are 15-1-1 in their previous 17 outings dating to a 3-1 loss to the Tri-State Spartans Dec. 13. Oakland began the year by going 1-2-1 but is 27-4-1 since. Three of its losses have come against the fourth-ranked Chicago Jets. Montgomery came into the tournament with a 42-10-1 record and having outscored its foes, 267-85. The Blue Devils brought a seven-game winning streak with them to Pittsburgh and a 12-1 record in their previous 13 outings. These two teams met Jan. 17 and 18, with Montgomery pulling off a 4-1 upset after dropping the first contest, 2-0. In addition to the victories over the Nos. 1 and 2 clubs, the Blue Devils own wins over the Nos. 7 and 25 Tier 2 teams and have gone 2-2 vs. AAA clubs.

Top-ranked Shattuck normally plays one of the nation’s most ambitious schedules, but this year the Sabres were faced with a long layoff that extended from Nov. 11 until Jan. 21 thanks to COVID-19 restrictions. They returned to action Jan. 21, sweeping a pair of games against the Des Moines Buccaneers to improve to 16-1-2 for the season. CarShield, on the other hand, has been more fortunate, skating to a 40-14-0 record and outscoring its opponents, 218-139. Shattuck had outscored its foes by a 108-37 margin entering the weekend. The Sabres opened the year with six straight victories and a 10-game unbeaten streak (9-0-1) before suffering their first loss, 7-3, against the Minnesota Elite (TCOrtho), ranked No. 1 in all of U.S. 18U hockey, Oct. 25. The Sabres knocked off that same squad, 5-3, Oct. 3 and also has notched victories against the overall Nos. 4, 6, 7, 10 and 16 teams. They also faced the second-ranked 18U Tier 1 team Nov. 7, skating to a thrilling 3-2 victory against Pittsburgh Penguins Elite. CarShield entered the NAPHL Playoffs having dropped its previous two contests before recording a 5-2 victory against the No. 63 Soo Indians Friday morning. They are 10-5-0 in their last 15 outings and also split with Des Moines Jan. 8-9. CarShield has recorded victories against the Nos. 8, 10, 17 and 18 Tier 1 teams this season and also knocked off No. 9 overall Northstar Academy Prep, 1-0, Oct. 25.

One of several good preliminary-round matchups at the Tier 1 EHL Playoffs, the Stars and Jr. Blues meet for the second time this season, with St. Louis having skated to a 2-1 victory Oct. 24. Dallas had outscored its opponents, 161-83, coming into the playoffs and had won three of its previous four contests, with the lone loss coming against the No. 16 Anaheim Jr. Ducks. Prior to that, the Stars dropped a hard-fought 2-1 decision to fourth-ranked Honeybaked. They are 9-3 in their last 12 contests and earned a 5-3 victory against the Minnesota Blizzard, the overall seventh-ranked 16U team, Oct. 23. Dallas also lost to No. 8 Fox Motors, 3-1, Dec. 20. St. Louis entered the weekend 21-17-1 on the year after splitting a pair of games against No. 15 Culver Academy last weekend. The Blues also split two contests vs. the No. 5 Bishop Kearney Selects Jan. 30-31. They were 7-7-0 in their previous 14 outings, a stretch that included a daunting schedule and nine one-goal contests. Three of those one-goal decisions were decided in overtime or shootouts, including a 4-3 shootout loss against the No. 9 Colorado Thunderbirds and an OT win and shootout loss vs. the No. 17 Oakland Jr. Grizzlies. Earlier in the year St. Louis knocked off No. 8 Fox motors and tied No. 11 Team Wisconsin while falling in a shootout to the Blizzard.

This is one of the top preliminary-round matchups in the 18U AA division of the NAPHL Playoffs as the Blue Devils from California take on the Falcons from Illinois. The NAPHL 18U AA playoffs include 10 of the nation’s top 27 teams. Highland Park entered the weekend without a loss in a season that saw the Falcons sit idle from Dec. 6 to Jan. 7 after getting a late start because of COVID-19 restrictions. The Falcons are just 12-0-1 on the year and have gone 6-0 since returning to action in early January. They have outscored their opponents, 58-17, and the lone blemish on their record is a 1-1 tie against the 22nd-ranked Littleton Hawks Oct. 4. Highland Park began the year with two wins over the Hawks and also has recorded victories against the Nos. 15, 19, 21 and 30 teams. Tri-Valley also has played an abbreviated schedule, posting a 14-3-0 record. The Blue Devils brought a nine-game winning streak into the weekend dating to an 8-2 loss to the No. 8 Texas Tigers Nov. 15. They also dropped a 4-3 decision to Littleton Nov. 13 and have recorded victories vs. the Nos. 16, 19, 22 and 27 clubs. Tri-Valley has outscored its opponents, 74-34.