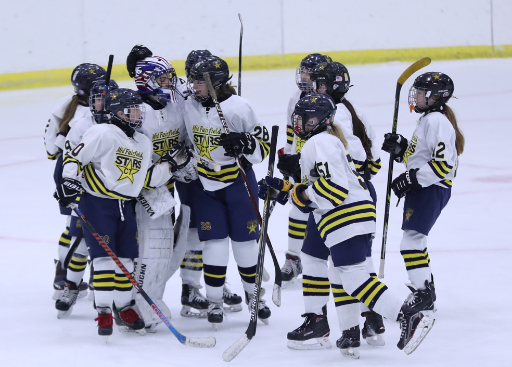 Week 18 MHR Games of the Week

As we continue into Week 18 of the youth hockey season, this week we received more great news as all youth and high school sports considered to be “high risk,” including hockey, were allowed to resume in New York as of Feb. 1. Other sports impacted by this decision include football, wrestling, rugby, basketball, contact lacrosse, volleyball, martial arts, competitive cheer and group dance.

The New York State Department of Health issued the following statement: “Effective Feb. 1, 2021, participants in higher-risk sports and recreation activities may partake in individual or distanced group training and organized no/low-contact group training and, further, may partake in other types of play, including competitions and tournaments, only as permitted by the respective local health authorities, (i.e., county health department).

This ruling comes as more hockey is being played in other states, including nearby Connecticut, which shut hockey down throughout the month of December in a ruling that extended well into January. The governors of various New England states have extended their prohibition of “interstate competition,” but localized play in Connecticut and other locations has picked up in recent weeks.

This week, as part of our MYHockeyRankings Games of the Week feature, we celebrate teams returning to play in Connecticut as we highlight two great girls’ programs at the 14U level that haven’t played competitively since mid-November. In addition, we have another great No. 1 vs. No. 2 matchup at the 12U girls’ level Saturday that will be our LiveBarn Featured Game of the Week.

Usually when choosing the Games of the Week we try to spread the love around to as many different programs as possible and to give boys and girls equal treatment. Given all the restrictions and number of teams playing this year, at times it has been hard to find information and to mix things up as much as we would like. And sometimes there are just matchups we can't ignore.

Last week we highlighted one of the top girls' prep and Tier 1 programs in the United States as national-powerhouse Shattuck-St. Mary's returned to action after a long break. Well, this week is one of those situations where we just can't ignore games that feature two of the top programs in North America, even if one of those teams has been highlighted recently.

The Shattuck girls are back in action again this weekend, with their 16U and 19U prep teams hosting the Chicago Mission. That means we have mathups of the Nos. 4 and 8 teams at the 16U level and Nos. 2 and 4 teams for 19U. It's hard not to feature games between two of the top clubs in North America under any circumstances.

So, for the first time since we started this feature in October 2019 we have an all girls' edition of Games of the Week!

The New England Girls Hockey League provides great matchups every week, and Week 18 is no different as the top-two tames in the nation at the 12U level face off in Foxboro, Mass. This will be the seventh meeting of the two powerhouses this season, with the Spitfires leading the series, 3-2-1. They split a pair of games in October and January, with the Spitfires winning the November matchup and the teams skating to a 2-all tie in December. As you might expect when the top-two teams play, each team has scored 15 goals in the previous six contests. East Coast earned a 2-1 decision on Jan. 17, with Massachusetts recording a 3-0 shutout Jan. 23. In the NEGHL Massachusetts 12U Winter Season standings, the Spitfires are 9-0-1, good for 19 points, and have outscored their opponents, 35-9. The Wizards are 4-1-5 for 13 points in league play and currently are fourth in the standings. Massachusetts is 21-3-1 overall, with two of those losses coming against East Coast, and have outscored their foes, 96-34, for the season. The Spitfires have won their last four outings, recording three shutouts and running up a 12-2 scoring margin in those games. That streak followed a rare two-game losing skid after they began the season by going 17-1-1. Massachusetts has recorded victories against the Nos. 2, 3, 4, 6 and 7 teams. The Wizards are 24-8-10 overall and have outscored their foes, 142-67, while earning victories against the Nos. 1, 3, 4, 6 and 7 clubs. They are 9-2-2 in their last 11 contests and recorded 2-1 victories against the sixth-ranked North Shore Vipers and No. 7 Bay State Breakers last weekend.

A pair of Connecticut teams get to see their first game action since mid-November when these in-state rivals face off Saturday in Simsbury, Conn. Mid-Fairfield enters the contest having played 21 games and posted a 16-3-2 record despite being off since Nov. 15. These two teams met Nov. 14, with the Stars recording a 6-0 victory before taking on different opponents the following day. They have been off ever since. The Northern Lights, who defeated the Connecticut Ice Cats, 9-1, in their last outing Nov. 15, are 13-5-5 on the year. Mid-Fairfield has outscored its foes, 60-22, for the season, while the Northern Lights hold a 67-41 scoring advantage over their opponents. The Stars are unbeaten in their last nine contests, going 7-0-2 in the span, and have held their last four opponents to one goal or fewer. They opened the year with four straight shutouts and five consecutive victories. Mid-Fairfield has recorded nine shutouts and held its opponents to one goal or fewer 15 times. The Stars have lost twice to the third-ranked East Coast Wizards and once to the No. 6 Philadelphia Jr. Flyers. In their last outing on Nov. 15, the Northern Lights skated to a 1-1 tie against the No. 25 Connecticut Polar Bears. They started the year by going 13-2-3 but went 0-3-2 heading into the extended COVID break. Connecticut has skated to ties against the 18th-ranked New Jersey Colonials and No. 17 Hartford Wolfpack.

Shattuck returned to action Jan. 23 after more than two months off because of COVID-19 restrictions, and the Sabres have picked right up where they left off by going 5-0 since retunring to play and outscoring its opponents, 34-5. Last weekend the Sabres took on a tough 23rd-ranked Chicago Young Americans team and came away with 4-1 and 4-3 victories to improve to 16-6-0 on the season. Overall they have outscored their opponents, 85-33. Shattuck actually had lost its last two games, 3-0 to No. 16 Dallas Stars Elite and No. 17 Belle Tire, way back in November before their season was halted. Those setbacks ended four-game winning and three-game shutout streaks. That run was preceded by a 4-3 loss to top-ranked Minnesota Elite Vegas and a 3-2 setback vs. No. 2 Minnesota Elite Grey Oct. 10 and 11. The Sabres also knocked off the second-ranked Minnesota Elite Grey team, 4-2, Sept. 19 and have recorded victories against the Nos. 7, 11 and 13 clubs. They opened the season with a 1-0 loss to No. 1 Minnesota Elite Vegas. The eighth-ranked Mission also had a long COVID-related layoff, going from Oct. 25 until Jan. 9 without playing, but they have gone 6-2 since returning to action against a very strong slate of opponents that has included No. 9 Pittsburgh Penguins Elite, No. 30 Anaheim Lady Ducks, No. 3 Little Caesars, No. 28 Dallas Stars Elite and No. 10 Selects Academy at Bishop Kearney. The only losses over that span game against Little Caesars (4-3) and Pens Elite (2-1), a team that the Misison has posted a 4-1 record against since returning to action. Chicago is 9-6-0 overall and has outscored its foes, 40-25.

Second-ranked Shattuck returned to action two weeks ago and has gone 4-0 since, outscoring its opponents, 19-1, to improve to 18-4-2 on the year. Last weekend the Sabres swept fifth-ranked Belle Tire, 3-0 and 7-0, to extend their overall unbeaten streak to 17 games (15-0-2). Prior to returning to action Jan. 23, Shattuck had been off since defeating the No. 17 Dallas Stars, 5-2 and 3-2, on Nov. 14 and 15. The Sabres' last loss came against top-ranked Minnesota Elite White by a 2-0 margin Sept. 27. They also lost to the nation’s No. 1 team by scores of 5-3 and 3-1 earlier in the year, but recorded a 2-0 victory over them Oct. 4 and skated to a 2-2 tie Oct. 11. SSM has outscored its opponents, 82-39, for the season and allowed one goal or fewer 12 times (eight shutouts). The Mission are 14-3-0 on the season after going 9-1 since returning to action following more than a two-month layoff Jan. 9. Prior to that, Chicago's last contest was a 2-2 victory against the Madison Capitols Oct. 25. The Mission bring an eight-game winning streak into Saturday's contest, outscoring those eight foes by a combined 47-3. They also have recorded five shutouts during that stretch and not allowed more than one goal. Chicago's toughest matchup since returning to the ice was a 2-1 shootout win against No. 11 Selects Academy at Bishop Kearney Jan. 17. They have outscored their opponents by a remarkable 76-16 margin for the year, allowing an average of just 0.94 goals per game and permitting more than one goal just four times.