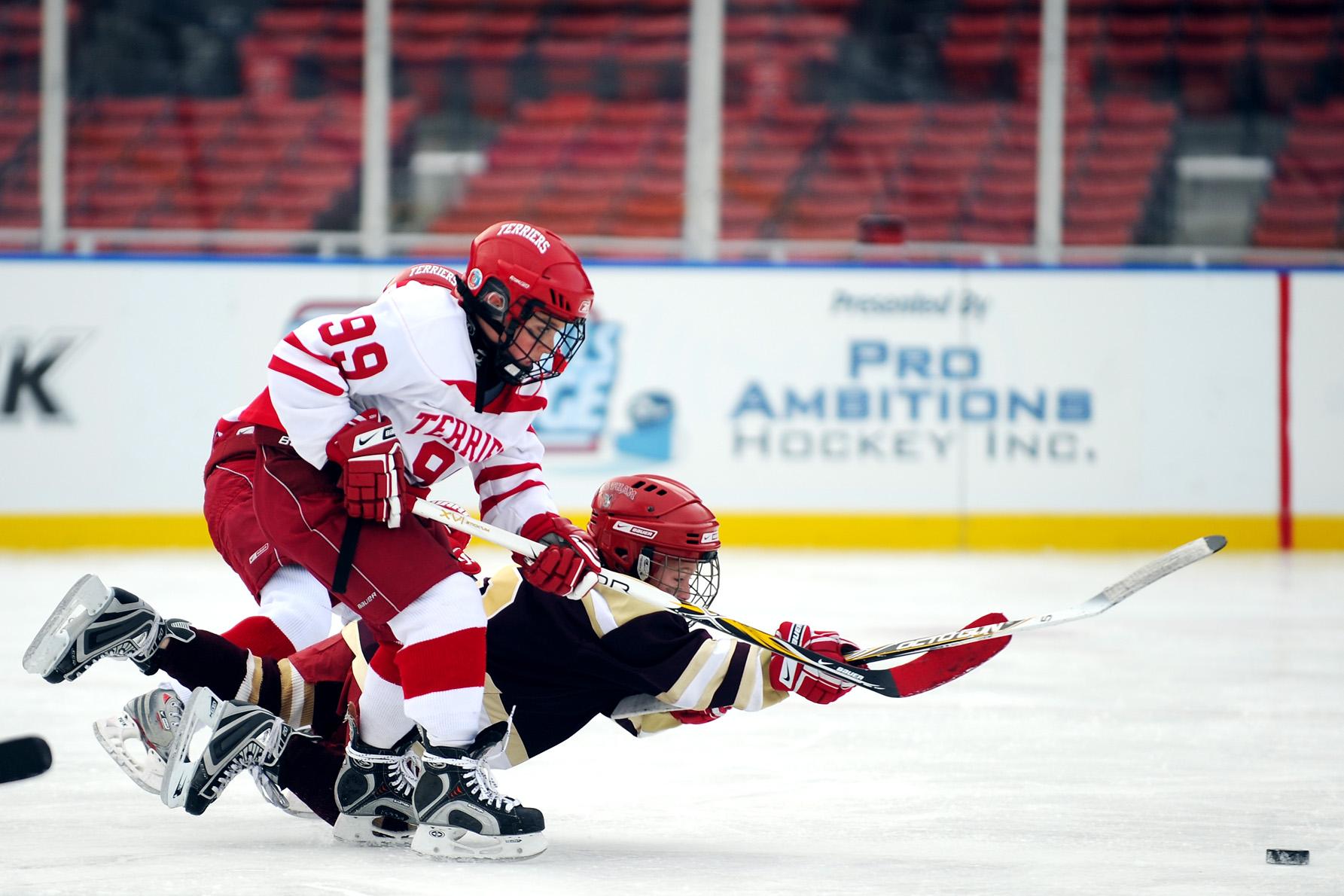 Week 17 is here already, and the last weekend of January brings us more great youth hockey matchups across the United States just as we received the news that in Canadian junior hockey the Western Hockey League’s five Alberta teams have been given the green light to begin their regular seasons. The league’s 24-game regular season is slated to begin Feb. 26 for those organizations.

WHL teams in Alberta will be allowed to play on weekends only and in back-to-back games against the same team. Four teams will play each weekend, with one team sitting out. Fans will not be permitted. If any players or staff test positive for COVID-19, that team’s activities will be suspended for 14 days. Masks must be worn by players at all times except during on-ice practices and competition, with coaches required to wear masks when coaching on the ice and behind the bench.

The league’s five British Columbia-based teams are still waiting to hear their fate as current provincial orders prevent games between rival teams and travel until at least Feb. 5.

The only Canadian Major Junior League to play regular-season games this year has been the Quebec Major Junior Hockey League, which resumed play Jan. 3 after a pause in the season. The Ontario Hockey League is hoping to begin play in February.

Getting back to youth hockey in the U.S., this week’s top featured MYHockey Rankings Tier 1 boys’ matchups include 12U and 13U games, with the No. 5 12U PeeWee Major Boston Jr. Eagles facing the 12th-ranked Boston Jr. Terriers and the eighth-ranked 13U Bantam Minor Northeast Wisconsin Jr. Gambers taking on No. 10 Team Illinois in Wisconsin.

Girls Games of the Week will be posted shortly.

Two of the top youth hockey organizations in the Northeast face off for this Eastern Hockey Federation rivalry game in East Boston. The Jr. Terriers are in third place in EHF play at 13-7-5, two points ahead of the 13-6-3 Jr. Eagles, who have a pair of games in hand. The Jr. Eagles are ranked fifth nationally, however, at 21-11-7 overall thanks to a difficult schedule that ranks third-toughest among the top-10 teams. Meanwhile, the Jr. Terriers are 24-9-6 against a schedule that grades out a little weaker than their opponent’s. Included among the Jr. Eagles’ victories are wins over the Nos. 6, 8, 9, 17 and 19 teams in the country. They are 5-1-1 in their last seven contests and 9-2-2 in their past 13 and have outscored their opponents, 155-83. These two teams have played four times thus far, with the Jr. Eagles holding a 2-1-1 advantage in the series and a 14-10 scoring edge in those contests. The Jr. Terriers split a pair of games last weekend, falling to the No. 6 Minuteman Flames, 4-1, and beating the No. 42 Bay State Breakers, 5-1. They are 6-2-1 in their last nine outings, with the other loss coming against No. 8 Top Gun. Included in that stretch was a 5-4 win against the Jr. Eagles, and thus far they have recorded victories against the Nos. 5, 6, 8 and 19 teams to go along with a pair of ties against the second-ranked Mid-Fairfield Jr. Rangers. The Jr. Terriers have outscored their foes, 157-82.

A weekend series featuring a pair of Midwest top-10 2007 birthyear programs is on tap this weekend in frigid Green Bay. The Northeast Wisconsin Jr. Gamblers bring a 26-9-4 record into the weekend and hold a 207-102 scoring advantage over their opponents to date. Team Illinois is 11-3-7 and has outscored its foes, 67-48. These teams met twice early in the season, way back on Sept. 13, with Team Illinois earning 5-4 and 8-0 victories. They also won the Nov. 13 rematch, 5-2, but the Jr. Gamblers exacted some revenge in a 6-0 shutout victory Nov. 15. This will be TI’s first game since skating to a win and a tie against the No. 18 Chicago Young Americans Dec. 13. Team Illinois has tied three of its last five outings, going 1-1-3 in the process. They are 4-1-3 in the last eight contests and 9-2-6 in their past 17. TI has tied the Nos. 2, 9 and 11 teams and beaten second-ranked Little Caesars this season. The Jr. Gamblers swept a pair of games by a combined 19-4 against the No. 79 Milwaukee Jr. Admirals last weekend. Prior to that, on Jan. 18, they dropped a 4-1 decision to the No. 12 St. Louis AAA Blues and are 8-2-4 in their last 14 games. Northeast Wisconsin has recorded a pair of wins against the No. 7 LA Jr. Kings.

Shattuck returned to action last weekend and improved to 16-4-2 overall with three victories against the Ice Cougars by scores of 5-0, 5-0 and 4-1. Those were their first games since defeating the No. 17 Dallas Stars, 5-2 and 3-2, on Nov. 14 and 15. Last weekend’s victories improved the Sabres’ unbreaten streak to 15 games (13-0-2), with their last loss coming against top-ranked Minnesota Elite White by a 2-0 margin Sept. 27. They also lost to the nation’s No. 1 team by scores of 5-3 and 3-1 earlier in the year but recorded a 2-0 victory over them Oct. 4 and skated to a 2-2 tie Oct. 11. SSM has outscored its opponents, 58-38, for the season and allowed one goal or fewer 10 times (six shutouts). CYA is 10-9-2 overall and 4-1 in its last five outings, including shutout wins over the No. 38 Boston Shamrocks and No. 34 Team Colorado. They dropped a 3-1 decision to the 12th-ranked Jr. Flyers Jan. 17 in their most recent contest and knocked off No. 8 North American Hockey Academy Jan. 16. Another recent good win for CYA came against No. 16 Northwood School Jan. 10, and the Young Americans skated to a 2-2 tie against No. 7 Honeybaked Dec. 5. They also beat the fourth-ranked Northern Michigan K-Stars Oct. 25.

After a long layoff, SSM was back on the ice last weekend and rolled to three victories against the 40th-ranked Milwaukee Jr. Admirals by a combined score of 26-1. Those wins improved the fourth-ranked Sabres’ record to 14-6-0, and those were their first games since a 3-0 loss against No. 17 Dallas Stars Elite Nov. 14. That game came almost a month after SSM’s previous outing, a 1-0 setback vs. No. 17 Belle Tire, in what has been a choppy season thanks to COVID-19 restrictions. The Belle Tire loss ended a three-game shutout and four-game winning streak for the Sabres that featured victories against the Nos. 19, 20, 24 and 25 teams. That streak was preceded by a 4-3 loss to top-ranked Minnesota Elite Vegas and a 3-2 setback vs. No. 2 Minnesota Elite Grey Oct. 10 and 11. The Sabres also knocked off the second-ranked Elite Grey team, 4-2, Sept. 19 and have recorded victories against the Nos. 7, 11 and 13 clubs. They opened the season with a 1-0 loss to No. 1 Minnesota Elite Vegas and have outscored their opponents, 51-28. CYA is 10-12-7 overall and is coming off an incredible trip to West Palm Beach Jan. 15-18 in which they played five tightly contested contests vs. strong competition. They dropped a 1-0 shootout victory against the No. 19 Jr. Flyers and won in the same manner vs. No. 36 Team Illinois after both contests were scoreless through regulation and overtime. CYA also beat the No. 20 St. Louis Lady Blues, 2-1, and tied the third-ranked Alaska All-Stars, 1-1, following another 1-0 loss to the Jr. Flyers. CYA also has played three hard-fought games against No. 3 Little Caesars this year, skating to 0-0 tie Nov. 14 while also dropping 1-0 and 4-1 decisions.