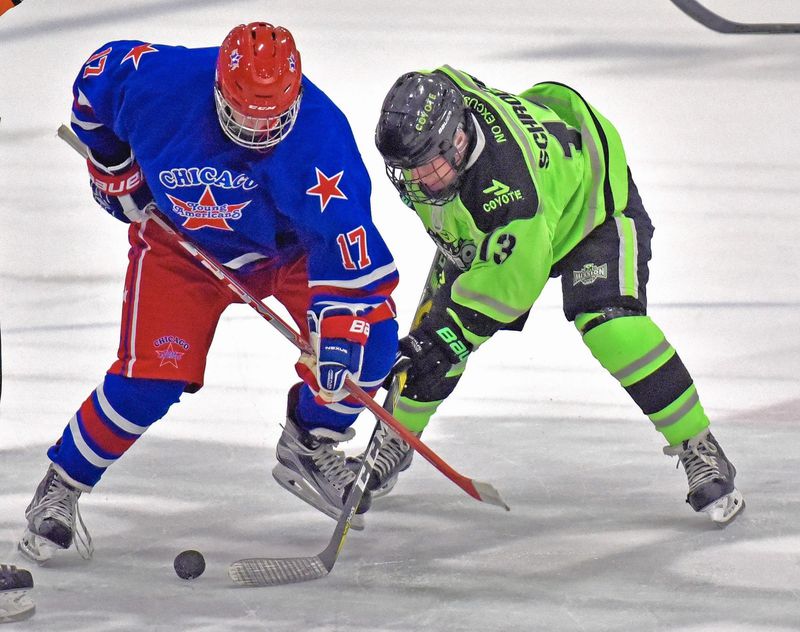 January 9, 2021
Happy New Year! hireplica
After a little bit of a hockey break in many parts of North America prior to and during the holidays, activity started to pick up last weekend with more action planned in areas that are permitted to hold games during the coming weekend and throughout January.
We highlight some of the top games for Week 14 of the MYHockey Rankings season below.
If you know of any great upcoming matchups, please reach out and let us know be messaging our Twitter account @MYHockeyRanking or sending an email to scott@myhockeyrankings.com.
MYHockeyRankings LiveBarn Featured Game of the Week
USA Boys 14U Tier 1
#11 Chicago Mission vs. #8 Compuware
Saturday, Jan. 9 – 2:10 p.m. EST
SportsOne/Parkview Icehouse – Fort Wayne, Ind.
Rink 2
watch on LiveBarn
A pair of top-11 teams take the ice as part of a Fort Wayne SuperSeries AAA Showcase in Indiana this weekend that features highly ranked teams at the 14U, 16U and 18U levels. Also competing in the 14U division are the fifth-ranked Northeast Wisconsin Jr. Gamblers, who take on Compuware at 7:45 a.m. Saturday in what should be a great, albeit very early, matchup as well. Compuware brings a 19-game unbeaten streak and a sparkling 18-0-2 record into the contest, having outscored its opponents, 88-21, along the way. On Friday Compuware skated to a 2-2 tie against Team Maryland in its opening game of the showcase. The only other blemish on its record is a 3-3 tie vs. Fox Motors Sept. 25. Friday’s tie snapped a four-game shutout streak in which Compuware had outscored its opponents, 24-0, while improving the number of games in which it had limited its foes to one goal or fewer to 18. The Mission’s season has been interrupted by COVID-19 restrictions, and they bring a record of 5-2 into Saturday’s game. This will be their first contest since a 2-0 victory against the Chicago Young Americans Nov. 22. Chicago has recorded three shutouts in its five wins and held its opponents to one goal or fewer in each victory.
USA Boys 16U Tier 1
#12 Culver Academy vs. #19 Northeast Wisconsin Jr. Gamblers
Saturday, Jan. 9 – 6:00 p.m. EST
SportsOne/Parkview Icehouse – Fort Wayne, Ind.
Rink 1
watch on LiveBarn
The 16U division at the Fort Wayne SuperSeries AAA Showcase includes four of the top-35 teams in the nation. This is the marquee matchup in the 16U group, with Culver having outscored its opponents, 42-14, in posting a 5-2 record and the Gamblers bringing a 22-10-1 mark into the game. The Gamblers opened showcase play Friday with a 4-1 victory against No. 35 Little Caesars. Culver fell to No. 24 Compuware, 3-2, to drop to 5-3 on the year. Culver split a pair of contests vs. the St. Louis AAA Blues Dec. 12 and 13 in its most recent action prior to this weekend’s event. The Gamblers are 9-1-1 in their past 11 contests after knocking off Little Caesars. Both of these teams have beaten Team Illinois in close games, and the Gamblers also beat Compuware, 2-1, Oct. 30, so this figures to be a closely contested matchup. The Gamblers have outscored their opponents, 116-78, this season
USA Girls 16U Tier 1
#2 Little Caesars vs. #20 Chicago Young Americans
Saturday, Jan. 9 – 8:00 p.m. EST
Whitehurst Arena – Lakewood, Ohio
A pair of top-20 16U girls teams face off as part of a big weekend of hockey hosted by the Gilmour Academy 16U and 19U teams in Ohio. Little Caesars has been dominant all year and brought a 26-0-2 record into this weekend’s event before knocking off the Northwood School, 3-1, Friday. They also are scheduled to take on the No. 13 Gilmour Gladiators in a rematch of an earlier-season MHR Game of the Week Saturday morning. Friday’s game was the first for LC since a 4-1 victory against the Madison Capitals Nov. 15. Little Caesars has allowed more than one goal once in its last 16 contests, recording eight shutouts during that span. LC has outscored its foes, 141-23, for the season and has wins vs. 12 teams ranked among the top 20. These two teams played Nov. 14 and 15, with LC earning a 1-0 victory after they played to a scoreless tie the day before. CYA brings an 8-8-6 record into the weekend and has a 1-2-3 record in its last six outings while surrendering a total of just five goals in those contests. The Young Americans have outscored their opponents, 39-28, this season.
USA Girls 12U Tier 1
#1 Massachusetts Spitfires vs. #3 Assabet Valley Red
Sunday, Jan. 10 – 5:40 p.m. EST
Valley Sports – West Concord, Mass.
The first- and second-place teams in the New England Girls Hockey League face off in Massachusetts Sunday. The Spitfires are 5-0-1 in league play, while Assabet Valley is 5-2-1 and five points ahead of the third-place and second-ranked East Coast Wizards, who have one win and four ties in NEGHL play. Massachusetts is 15-1-1 overall after beating the No. 9 Springfield Jr. Thunderbirds, 5-2, Jan. 3 in its first game back after the holidays. The Spitfires have given up more than two goals once this season, amazingly in a 7-2 loss to the Wizards Oct. 11. They came back the following week to avenge that setback with a 3-2 win against East Coast. Mass. opened the season with a 9-1 thrashing of Assabet way back on Sept. 13, but it was a much different story when the two teams met Dec. 5 as the Spitfires clawed their way to a 1-0 victory. That was one of three shutouts for them on the season, and they have permitted one or no goals 11 times while outscoring their opponents, 70-23. Assabet Valley is 14-7-2 overall but is riding a seven-game winning and eight-game unbeaten streak during which the team has outscored its foes, 35-9. In its most recent games, Dec. 30 and Jan. 2, Assabet beat the fourth-ranked Boston Jr. Eagles, 4-3, and the No. 2 Wizards, 3-2. For the year, Assabet Valley has outscored its opponents, 73-50.