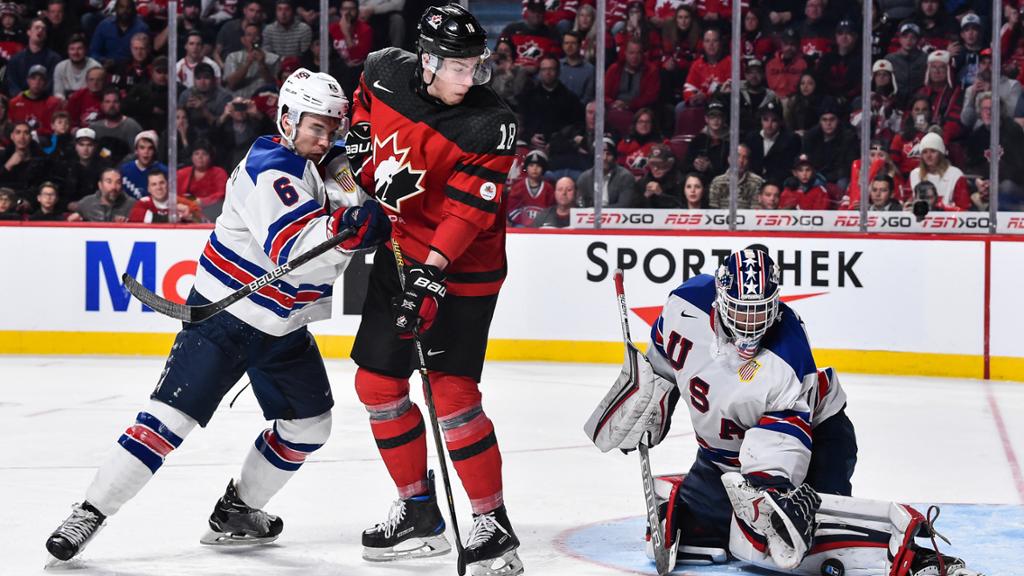 January 4, 2021
NHL.com Photo
By Scott Lowe - MyHockeyRankings.com
Dave Starman probably watches as much or more hockey than just about anyone, but even he can’t watch every game.
Starman will be the color analyst for Monday night’s International Ice Hockey Federation seminfinal game between the United States and Finland on NHL Network, just like he has called the American’s previous five contests in the tournament. A youth hockey coach on Long Island, he is a preparation freak who approaches each broadcast as if he’s coaching for a medal.
That doesn’t leave much free time, especially mixed in with holiday family commitments and the CBS Network college game Starman called over the weekend, for the busiest man in amateur hockey to evaluate and analyze the teams that have yet to play against the U.S.
In fact, if Starman had his way, he would be doing even more in-person research and picking the brains of as many coaches as possible while also watching teams practice. Being forced by the COVID-19 outbreak to call games from NHL Network’s New Jersey Studios instead of being on-site in the Edmonton bubble has limited his pre-game prep to hours of film breakdown as well as phone and Zoom calls.
“The great thing about being on-site is not only the interviews the coaches do with our staff, but also getting to watch all the teams practice live and in person,” Starman said before the tournament. “As a coach I’m able to steal a million drills for my own personal use, and I get to Replica Watches all these high-end players playing for high-end coaches up close and can get a sense for how they approach the game while watching them do their various small games, flow drills and tactical work.”
While Starman misses what he calls his favorite part of covering the WJC, he’s hardly complaining. He spent more than two weeks and called nearly 20 games for the National Collegiate Hockey Conference from the NCHC “Pod” in Omaha immediately before tackling his WJC assignment.
“I’m pretty much bubbled out,” he said after leaving Omaha to prep for the WJC.
Starman has spent much of Sunday and Monday preparing for Monday’s U.S.-Finland tilt, which faces off at 9:30 p.m. EST, pouring over game video and Tweeting interesting facts about his findings.
“A little look at some of the things Team USA is doing,” he Tweeted here. “Highlighting {Brock} Faber-{Cam} York defense pair and the {Matthew} Beniers line. Cut this last night as the U.S. and Finland get set for their semifinal tonight.”
That particular clip highlights backchecking, gap control and defensive support while also taking a look of how the U.S. handles transition, makes plays off the rush and then supports when a rush is shut down.
Another Tweet talked about how the Fins clamped down on Sweden late in their semifinal victory Saturday.
“Last two minutes of Sweden-Finland game, Sweden touched the puck seven times (mostly off a shot or block), had possession once for two seconds. Finns won five races, including one that waived off an icing until they scored, never lost control of the puck and scored. Impressive last 40 minutes vs. Sweden.”
And still another: “I’m having double déjà vu spending an entire day watching Finland game film in the first week of January. I enjoy their game, they play hard.”
Starman’s intensive preparation allows him to provide with more information than viewers would ever need to know every time he is on the air. But that extra effort also diminishes his ability to evaluate all the teams competing in the WJC. For example, he’s seen Russia, which knocked off the U.S. 5-3 on the tournament’s opening night, once and hasn’t watched Canada play at all.
Still as a hockey junkie who is calling his 13th WJC and has seen many of the players in this year’s tournament play at one time or another, he is more qualified than probably anybody except maybe the TSN broadcast crew to break down this year’s WJC final four, which gets underway today at 6:30 p.m. EST with the Canada-Russia game.
Canada, a team stacked with 13 forwards who were first-round NHL draft picks even without the Blackhawks’ Kirby Dach and Rangers’ Alexis Lafreniere available to play, has shown that it is a team that can wind it up and run and gun better than anyone while also possessing the discipline and ability to clamp down and allow very few quality chances.
The Canadians lead the WJC in goals scored with 36, but also are tops in fewest goals allowed with four, three better than the United States. Canada barely allowed any chances in a preliminary-round dismantling of Finland and stifled the Czech Republic attack in Saturday’s 3-0 semifinal whitewashing.
Goaltending was the one unknown for Canada entering the tournament, but the team has shown the ability to play any style necessary to help their netminders be successful as evidenced by Devon Levi’s WJC-leading 0.64 goals-against average and .967 save percentage.
“I have not seen Canada play yet,” Starman said. “My way to survive this tourney is only watch the next team the U.S. plays. If we play Canada on Jan 5 for gold, it will be an all-day study on Canada.”

Starman has seen Russia play once in the tournament in the 5-3 opening-night victory that was aided by several American goaltending blunders, and in a pre-tournament 1-0 loss to the Canadians in which he was impressed with their approach, which reminded him of the great Soviet teams coach Igor Larionov played for in the ‘80s.
“They do play a puck possession style, which can frustrate a team, but the Canadian coaches probably have a good handle on it having seen it all week,” he said. “My concern for the Russians is if they are playing that style and not scoring, do they panic, break away from it and start to get selfish with the puck?  {Goaltender Yaroslav} Askarov has been playing well, but this will be the best offensive team he faces.”
Askarov is the X-factor, having entered the tournament as the highest Russian goaltending NHL draft pick ever, and possessing the ability to steal a game against a better team. If the Russians hadn’t allowed a late goal to Sweden in the preliminary round before rallying to win, 4-3 in overtime, they would have been the top seed coming out of Group B.
Russia is big, fast, skilled and physical. Askarov has played 243 minutes, including outings against the U.S. and Sweden, and posted a 2.43 GAA and .918 save percentage. The Russians have scored 18 goals, half of Canada’s output, and will have to find a way to sneak one past Levi early so they can play their game throughout. Playing from behind would be very challenging against the deep and versatile Canadians.
Their top scorer, Rodion Amirov, has two goals and four assists, to rank 14th in the tournament, while Canada has five players among the top-11 scorers, including Dylan Cozens, who ranks second with 13 points.
Trevor Zegras of the United States leads all scorers with 6-9-15, while Matthew Boldy, John Farinacci, Bobby Brink and Cam York all rank among the top 11 in points with six apiece.

Boldy has been the biggest U.S. surprise for Starman: “He was someone I hadn’t seen much of. He has impressed me. Looks like a young Jimmy Hayes.”
That offensive depth should allow the Americans to be favored against a Finnish team that Canada mostly dominated and hold their own if they win and meet the Canadians in the gold-medal game. Still, the key for the U.S. might be Boston College goaltender Spencer Knight.
Knight was projected to compete with Askarov for top-netminding honors entering the tournament, but allowed some weak goals and committed several puckhandling miscues in the loss to Russia before getting yanked. His confidence seems to be restored after getting the starting nod and making 27 saves in last week’s 4-0 shutout of the Swedes. Knight ranks second in the tournament in both GAA (1.70) and save percentage (.924).
“Knight is fine,” Starman said. “For the U.S., beating Finland means playing harder than them. The Finns demand a piece of skin when you go to the net or to the hard areas. The U.S. will need to handle the physical assault the Finns can bring. They are great on the forecheck. Retrievals and breakouts are a key component to this one.”
Finland went 3-1 in Group A preliminary-round play, scoring 16 goals while allowing just eight. Kari Piiroinen, who spent two years in the Ontario Hockey League and and is playing In his second WJC, has handled the bulk of Finland’s goaltending duties and has posted a 2.01 GAA and .918 save percentage. Anton Lundell, selected 12th overall by Florida in the 2020 NHL draft, leads Finland and ranks seventh in the tournament with 4-3-7.
So, what happens if the U.S. wins Monday and advances to the finals to face the Canadians in a gold-medal matchup?
“Regardless of who the U.S. plays, they need to play their game and make an opponent worry about them,” Starman said. “That's getting pucks behind defenses, getting pucks into good areas, Knight being solid and staying out of the box. They go to the net well and they defend well; I think they can force Canada into some uncomfortable matchups.”
Only time will tell, but I think most of us in North America hope that Dave Starman finally gets to watch Canada play.