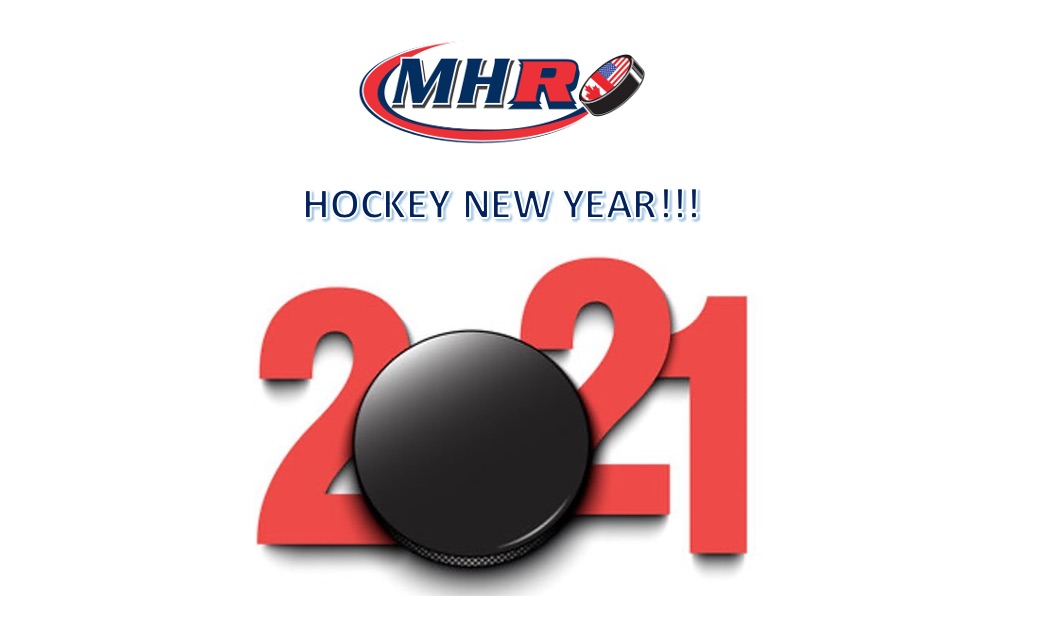 By the time you read this, 2020 will be in the rearview mirror. Thank God.

But in all seriousness, when I wrote a similar Hockey New Year piece this time a year ago, no one could have predicted what was in front of us in the year ahead.

For those of you who survived, congratulations!

We will be better, stronger and hopefully a little more appreciative, tolerant, patient, understanding, selfless and nicer going forward. Every day, every practice and every shift truly are blessings. Take nothing for granted. Stop and smell the roses occasionally. Everything and everyone you love can be taken away in instant – for a few days, a few months, a year or forever.

And to the countless thousands of North Americans who lost friends or loved ones to a lethal virus that doesn’t discriminate – or because of something else that happened – please accept our condolences and best wishes for the strength to carry on and a happier, healthier 2021.

It would be fun to look back reminisce about how great the year in hockey was, but it really wasn’t so amazing. Too many kids were sent to the sidelines, unable to play because of rink shutdowns that were enacted as we tried to combat the spread of the coronavirus. Too many seasons were cut short. Too many dreams were shattered. Too many careers were put on hold. Too many beer leagues didn’t get to award their beat-up, empty-keg championship trophies.

No college hockey champions were crowned, leaving the seniors on those teams in limbo trying to figure out if they should come back and give it one more shot or move on with their professional lives – on or off the ice. Minor-league and junior team operations were shut down, with their owners, staff members and game-day workers facing the harsh financial realities created by the spread of COVID-19.

Both the men’s and women’s world championships were canceled, but the United States and Canadian women’s teams did manage to play in front of 13,320 fans at the Anaheim Honda Center, considered to be the largest crowd to watch a women’s hockey game in the United States, in the final contest of the five-game Rivalry Series between the two nations.

Incoming college hockey freshmen were told to wait another year – if they had another year to wait – while those without any junior eligibility often began their college off-ice careers isolated in dorm rooms or at home taking classes alone via Zoom. Players finishing up their youth hockey careers and looking to continue playing were told by junior coaches to send more video with the hope that tryout camps eventually could be held.

In some areas, AA and AAA rosters were filled – or mostly filled – without any tryouts at all, while in other areas tryouts were pushed back to the summer, fall or never happened at all. For the most part, no one in North America was on the ice between March and June. And when rinks finally opened again, it was generally for small groups only, with a bunch of rules and restrictions and limited or no contact.

Players were dressing in their cars, being locked out of locker rooms, getting their temperatures taken upon entering rinks and being asked to leave without socializing as soon as sessions were done. Spectators were not permitted except in extreme cases where players needed assistance.

In some areas clubs never got beyond holding small-group sessions before the second wave of the virus hit. In other areas, seasons started nearly on time and teams scrambled to get in as many games as possible before the next outbreak or shutdown. Games were played without checking. Players weren’t allowed to share penalty boxes or benches, with half the team standing outside the bench area or sitting in bleachers. Some games were even played with no faceoffs. Coaches and fans – if spectators were allowed into the rink at all – wore masks, and sometimes so did some or all of the players.

A few junior leagues gave it a go. A few didn’t. A few took a break and are gearing up for an extended season starting in January. And some have managed to trudge on, postponing games as necessary and limiting travel in hopes of complying with local regulations and getting in as many of their scheduled contests as possible. One league even has decided to create a bubble in Florida in an attempt to provide its players with something resembling a full season.

The Ontario Hockey League, perhaps the top junior league in the world, even flirted with playing limited or no-contact games, sending some players scurrying to Europe in hopes of not having their development stunted by a wasted year. Hockey hotbed Massachusetts did require non-contact games for a period of time after play resumed. Some players who enrolled in college but still had junior eligibility returned to the junior ranks in an effort to stay sharp, remain fit and play some games.

A handful of NCAA Division I college programs, including the entire Ivy League, took the year off while their players were permitted to practice in hopes of providing them with some sense of normalcy as well as a physical and emotional outlet. Division III teams practiced, with some leagues cancelling their conference schedules while their member institutions and other conferences still hold out hope for a February start.

The National Hockey League shut down in mid-March. We waited patiently for the COVID spread to slow in hopes that the NHL would find a way to complete its season. Ultimately, the league bubbled in Toronto and Edmonton, keeping all players and working staff isolated and subject to intense COVID protocols while playing without fans.

That’s right, there were no fans. A few more teams were invited to the postseason party than usual since the regular season would not be completed, and in a rare bright spot during the year in hockey that was 2020, hockey fans were treated to a sorely needed once-in-a-lifetime treat: Stanley Cup Playoff hockey in the summer. Exhibition games started in late July, followed by a round of play-in series, round-robin games and a full four rounds of playoffs.

Maybe it was because we all missed hockey so badly, but the level of play seemed remarkably high. The intensity, even without fans in the buildings, was there right from the start with members of the Rangers and Hurricanes squaring off for fisticuffs just moments into the first play-in series game.

There were upsets in the play-in round, spectacular and record-breaking performances like the 85-save effort by Joonas Korpisalo of the Columbus Blue Jackets, young players who stepped up and played like veterans after having four months off to train and injured veterans who otherwise would have missed the spring playoffs but were healthy enough to compete in the summer version.

One of those injured vets, Tampa Bay Lightning captain Steven Stamkos, returned for part of one game and somehow scored a goal to provide a huge emotional lift for his team despite leaving the game not long after scoring and not returning for the remainder of the playoffs. Well, he did actually return to receive the Stanley Cup from Gary Bettman after his team had knocked off the Dallas Stars in the Finals in what had to be the most memorable hockey moment of 2020.

Then, in early October, it was over. Just like that. No more hockey.

Actually, some of the youth leagues and teams that began their seasons in September kept playing, although as COVID cases surged again more and more leagues, teams and rinks were forced to put hockey on hold again. A few leagues and teams continued play into December, but as each week progressed more areas took a break from organized hockey.

But just as the sport has been put on pause in so many places again – as the year that would never end winds down – NCAA college hockey has begun, with the National Collegiate Hockey Conference playing nearly 40 games between Dec. 1 and 21 in an Omaha, Neb., “pod” and many of the other Division I men’s and women’s leagues playing games with extensive protocols and testing in place while limiting travel and overnight stays.

And as soon as the NCHC pod wrapped up we moved on to the 2021 World Junior Championship pre-tournament games from the Edmonton Bubble, and now NHL players are reporting for training camp as the league has announced a 56-game regular season beginning Jan. 13.

So yes, there is light at the end of the tunnel.

We appear to be a few months away from a return to near-normalcy. A vaccine has arrived, and a new year is upon us – one that just has to be better than 2020. The NHL season is literally right around the corner, youth and junior leagues have talked about being patient and extending their seasons and college hockey is almost in full swing.

We’re almost there. Good things are ahead. Just hang in there, be patient and play by the rules a little bit longer.

All of us at MyHockey Rankings wish the entire hockey community a safe and happy 2021.

Happy New Year to you and yours and all of these fine folks who had a memorable 2020:

Dr. Fauci – thanks for trying.

Mike Schafer and Doug Derraugh – as a parent of two college athletes I share, yet can’t truly imagine, the pain felt by these two Cornell coaches and their 2020 seniors. Go Big Red!

Henrik Lundqvist and Ryan Callahan – the King and Captain Cally.

Dan Hamhuis, Mike Green and Matt Niskanen – thanks for the memories.