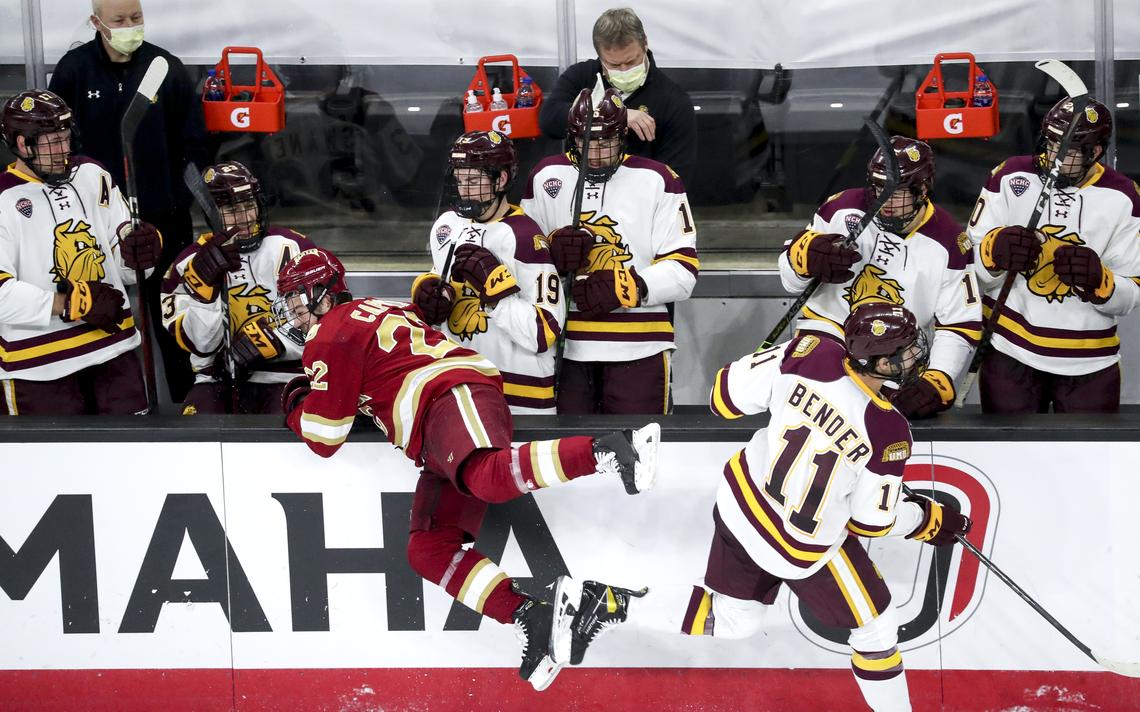 A View From the Pod With Dave Starman - Week 2

By Dave Starman via Scott Lowe

Apparently even the guy who Replica Watches more college hockey games than anyone has his limits.

For Dave Starman, the voice of college hockey for CBS Sports Network since 2013 and the voice of the World Junior Championships in the United States, the idea of nearly 40 National Collegiate Hockey Conference NCAA Division I hockey games being played in one location over a three-week span probably sounded like heaven on earth. But last week as he and others sequestered in the COVID-induced Omaha NCHC “Pod” prepared for the league’s 14th game in eight days, it was too much even for Starman’s brain to process.

On Dec. 8 Miami was scheduled to take on Minnesota Duluth in the third game of that day’s triple-header. The teams were meeting for the second time in three days, with UMD having won the previous matchup, 5-1. For a broadcaster – especially one who will be on the air for 20 games in three weeks – the good news about calling two contests featuring the same teams in such a short period of time is that the second matchup requires little or no preparation.

Things are not always as they seem in the “Pod,” however.

As Starman and Alex Heinert, his partner for that night’s broadcast, went through their pregame preparation ritual, Starman asked what happened the last time the two teams played. Heinert reminded him that the teams had played just two days earlier, and that Starman had been on the call.

“I had absolutely no recollection of what happened in that game,” Starman said. “I guess that happens when you do 17 games in 12 days.”

Despite the short-term case of brain overload, Starman and others have been extremely vocal in praising the efforts of the NCHC – as well as the coaching, sports information and equipment personnel from each member institution – to ensure that everything in the Omaha “Pod” has run as smoothly as possible.

“It’s just been steady,” Starman said. “There have been no hair-raising issues whatsoever. Everything has been done so well and so much has been done to make sure that things are good for everyone involved that there hasn’t been any real opportunity for anything to come up other than a little ‘Pod’ fog and us getting a little punchy from time to time.”

As mentioned here last week, NCHC COVID protocols limit everyone’s ability to interact and move about freely. The hectic schedule of games that features two or three contests on most days has cut into the amount of time the broadcasters can spend preparing for games, but also has allowed them to establish a bit of a daily routine.

“It’s been crazy in terms of so many games being played and having so much to prepare for,” Starman said. “The majority of preparation here is just keeping up to date with what’s happening each day, which is different from normal game preparation where there might be more time to watch film and opportunities to talk in-depth with the players and coaches. It’s different from World Juniors, too, where you’re more focused on the U.S. team and its opponents instead of eight different teams. But there’s no travel, so that has allowed me to get into a fairly good routine.”

An unfortunate side effect of the COVID precautions is that those inside the “Pod” have not had a chance to explore the local restaurant scene or have much interaction with others outside of their immediate cohort.

“All of the meals are catered at the rink, so the food has been steady and there is not a lot of interaction happening,” Starman said. “They gutted one of the pro shops and turned it into a locker room to keep the teams from moving around as much, but with so much going on there just isn’t much opportunity for anything to happen off the ice.

In last week’s wrap up of the first week in the “Pod,” Starman mentioned that despite its 0-3 record he thought that Denver might win the rest of its games in Omaha and prove to be the best team heading into the holidays. He mentioned that Miami had a dynamic duo in goal that would keep its somewhat offensively challenged team in games and that it would be interesting to see how a Western Michigan team that returned just one of its top six scorers and had been outscored 22-7 in three losses would adapt and figure out the best way to be competitive during the final two weeks in Omaha.

Denver did rebound during Week 2 to improve to 2-4-0, one of Miami’s netminders was named NCHC Goalie of the Week and Western Michigan’s leadership core pulled the Broncos together as they improved to 2-4-1. Although Starman still thinks the best is yet to come for Minnesota Duluth, the Bulldogs continued to grind out workmanlike performances and sit atop the NCDC standings at 5-1-1, followed by speedy St. Cloud State at 4-2-0, ultra-talented North Dakota at 4-2-1 and Omaha at 4-3-0.

Despite the competitiveness and parity in the “Pod,” two NCHC teams UMD (3) and North Dakota (4) are ranked among the nation’s top five, with Denver (8) and St. Cloud (9) joining them in the top 10. Steady Omaha checks in at No. 17 this week, while Western Michigan and Colorado College received votes. Theoretically that means the seven of the NCHC’s eight teams currently are considered to be among that nation’s top 36 NCAA Division 1 programs.

Some more of Starman’s observations from the Pod through two weeks:

“They could be 6-0 and are a really good team even without having all of their parts right now. If you gave me a dollar to bet on one team that is under .500 right now and could make a good run in the NCAA Tournament, Denver would be at the top of my list.”

“I think once they got over the shock of {sophomore goalie Brandon} Bussi being out, Western Michigan’s leadership got everybody together. They took a look around the room and saw that everyone was pissed and knew they needed to figure out what they had to do to keep games tighter and not get blown out every night. They probably played more conservatively than they wanted to and moved away from that high-flying mindset that had developed in recent years when they had a ton of skill and some horses who clearly could carry them but also were hard to play against. Even with all the skill they had a lot of grit and snarl to their game. They saw that they need to block more shots, have a strong presence in front of the net, play more of a puck-control game and not leave the defense high and dry by trying to make plays that aren’t there.”

“They compete their butts off and play smart but are a little thin on experience with a lot of newcomers in the lineup. It’s always interesting to see how teams respond when they have a lot of new people in the fold, so it’s probably going to take another few games before we really get an idea of how this team takes shape.”

“Except for maybe one game when they were okay and not great, these {goalies} have been pretty good and the defense has been okay, too. They’re not getting turned around and walked all the time. We knew this team was going to be offensively challenged going into the season since they lost two-thirds of their top line, but I like how they compete even though they don’t have a lot of depth. They just play hard and are resilient. Everyone seems to be on the same page and cohesive. They play with a purpose and for each other, which was often not the case last year.”

“When we talk about the NCHC, in my mind there’s a big five at the top – Minnesota Duluth, North Dakota, St. Cloud, Denver and Omaha. Without Bussi being hurt you’d have Western Michigan sitting there to possibly make it a big six.”

“I think {Minnesota Duluth) has been better, but they’ve had some hiccups like everybody else has here. You just never feel comfortable playing them. It’s like the old Soviet teams where you can have a 3-2 lead with a minute and a half left and never be comfortable because they can score twice that quickly and beat you. You just don’t relax until the buzzer sounds.”

Omaha & St. Cloud in the Mix

“Omaha has been one of the most impressive teams to me. I just like to see them play, because they always just seem to figure it out. Omaha, to me, is a team to watch, and St. Cloud has not been great yet but has a chance to be really special I think with some more time to gel.”

“I think they probably got into the right frame of mind with their win {against Western Michigan} Sunday. Yes, they are missing two horses from their back line and have some injuries, but my God are they skilled. Holy smokes. They might not bring quite as much sandpaper as they have the past five or six years, but they are an incredibly skilled team.”

Forward of the Week

Frank was a key to Western Michigan’s turnaround in which the Broncos went 2-1-1 with a plus-one goal differential after going 0-3 and being outscored, 22-7, in Week 1. Returning to play in his home state, Frank finished the week with three goals, two assists, a plus-two rating and 13 shots on goal.

Defenseman of the Week

Kiersted recorded points in all four games, finishing the week with one tally and four helpers. He was the key component of a depleted five-man defensive unit in a 6-3 victory against Western Michigan. During the week he led all NCHC players with 12 blocked shots and recorded 14 shots on goal.

An explosive player, Gaber notched three goals and an assist in Week 2 after netting a pair of goals in his first collegiate week of play. He recorded his first career multi-point game in a 6-3 win vs. Western Michigan and notched 14 shots on goal in four contests.

Starman says: “He can score and skate and is not afraid. He’s really great to watch and has the ability to take over a game. It’s probably going to be him all year being the Rookie of the Week and maybe sharing it with someone else every week.”

Another rookie who has posted two solid weeks to start his career, Savoie had three points in three outings as Denver went 2-1-0. He netted the game-winner on the power play with 2:02 left in regulation as the Pioneers notched their first win of the season against North Dakota. Savoie has only been held pointless once so far and leads all NCHC rookies in points with six goals and two assists.

Starman Says: “That Savoie kid is really something else. He’s a lot of fun to watch play and seems to make an impact every time he’s on the ice.”

Goaltender of the Week

Persson led the RedHawks to their first victory of the season and recorded his first career shutout by making 30 saves in a 1-0 victory against Omaha. He also stopped 31 shots while allowing just two even-strength goals in a 3-1 loss against UMD. Persson posted a .953 save percentage in his two starts, stopping 61 of 64 shots. He’s 1-2-0 for the season and leads all rookie goaltenders nationally with a .945 save percentage and 1.68 goals-against average.