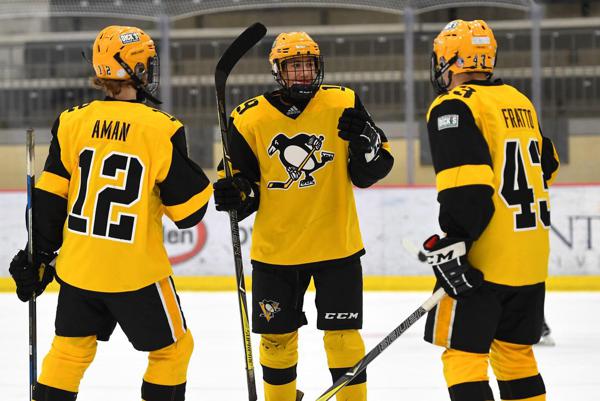 Week 11 MHR Games of the Week

A big SuperSeries AAA showcase in Indiana that features four of the nation’s top 10 16U Tier 1 boys’ teams highlights our Week 11 Games of the Week slate, while our LiveBarn Featured Game of the Week is a boys’ 18U tilt between No. 2 Pittsburgh Penguins Elite and No. 4 ROCO Coalition at the Lemieux Sports Complex just outside of Pittsburgh.

On the girls’ side, we head back to the Tier 1 New England Girls’ Hockey League for a pair of games featuring highly ranked teams at the 19U and 12U levels.

These two teams also face off Sunday at 1:10 on LiveBarn. Pens Elite brings a 12-2-0 record into the weekend but has been off since dropping a 3-2 overtime decision to No. 1 Shattuck-St. Mary’s Nov. 7. That setback ended a five-game winning streak that dated to an Oct. 17 OT loss against the Buffalo Jr. Sabres. Earlier in the year Pens Elite defeated the Jr. Sabres, 9-3. They have been perfect in their other 12 contests, including victories over the Nos. 8, 9, 14, 15 and 22 teams. Pens Elite has only allowed 19 goals in 14 contests while scoring 59 times, and they have recorded four shutouts while allowing as many as three goals only twice and one or fewer eight times. ROCO has a perfect 11-0-0 record coming into the weekend, but the first nine of those wins came in September. The team played its first games since Sept 7 against the No. 15 Esmark Stars of Pittsburgh Nov. 28 and 29, earning 3-1 and 5-3 victories. Prior to that their last win was a 7-2 decision vs. Team Maryland Sept. 7. Both teams have beaten the Stars and the No. 8 North Jersey Avalanche, and ROCO has outscored its opponents, 53-12. They have allowed one goal or fewer six times.

A pair of top-six USA Boys’ 16U teams take the ice as part of the AAA SuperSeries Indiana Showcase, an event that is being played Friday through Sunday and features four of the nation’s top 10 Tier 1 programs in that age group. Honeybaked enters the event having won 17 of its 19 games while outscoring its foes, 102-35. They have allowed just one goal in their last four outings – all wins – since dropping a pair of games by 4-2 and 4-1 scores to top-ranked Pittsburgh Penguins Elite Oct. 24 and 25. Those setbacks snapped a 13-game winning streak to start the season. Honeybaked has recorded wins against the No. 13 Anaheim Jr. Ducks, No. 15 Northeast Wisconsin Jr. Gamblers, No. 18 Oakland Jr. Grizzlies and No. 17 Ohio Blue Jackets. These two teams previously faced each other Oct. 4, with Honeybaked skating to a 6-2 victory. That loss was one of only four suffered by Fox Motors, which enters the weekend 21-4-0 despite dropping its most recent outing, 2-0, to the No. 10 St. Louis AAA Blues Nov. 22. Prior to that, Fox Motors had recorded three consecutive shutouts and 10 straight wins, allowing just nine goals during that stretch. For the year they have outscored their foes, 96-42, and own victories against the Nos. 10, 17, 18, 21 and 28 Tier 1 16U teams.

The Winter Season is underway in the New England Girls Hockey League, and this matchup features the current first- and third-place teams. Bay State brings a 3-1-0 league record and 17-4-1 overall mark into the weekend, while NAHA is 2-1-0 in league play and 11-8-1 overall. Bay State was 3-2-1 during the NEGHL fall slate. These two teams met Dec. 2 and Dec. 9, with NAHA skating to 3-2 and 4-0 victories. Bay State’s other two losses on the year were against the Boston Jr. Eagles and No. 5 East Coast Wizards. Prior to the most recent two losses to NAHA, the Breakers had gone 17-2-1. They did beat NAHA twice earlier in the season by scores of 2-1 in OT and 5-3 in early September. Bay State has gone 1-1-1 vs. the fifth-ranked Wizards and knocked off the No. 10 Jr. Flyers, 2-1 in overtime, and the No. 17 Connecticut Polar Bears, 3-2.  The Breakers have outscored their opponents, 103-37, for the season. NAHA, which plays as the Worcester White Hawks in the NEGHL, has won its last three since losing to the No. 5 Wizards, 7-0, Nov. 28. NAHA dropped a pair of one-goal decisions to No. 8 Honeybaked, No. 7 Belle Tire and the No. 4 Chicago Mission in late October while going 2-0-1 vs. the 18th-ranked Chicago Young Americans. NAHA also fell by a single goal to second-ranked Shattuck St. Mary’s and has outscored its opponents, 44-31, for the season.

More Winter Season action from the NEGHL, this time featuring the first- and third-place 12U teams. Bay State is 1-0-1 in league play and perched atop the early standings, while Assabet Valley is 1-1-0. Assabet went 6-5-0 in fall play to finish fourth, while the Breakers finished fifth at 4-10-1. Overall, Assabet is 7-6-0, with Bay State Entering the weekend at 5-10-2. Both teams have played extremely difficult schedules, with Bay State’s slate ranking first among the national top 10 in terms of strength and Assabet’s ranking third. Bay State knocked off the fifth-ranked North Shore Vipers, 6-2, in its most recent outing after splitting a pair of games against the No. 3 Boston Junior Eagles Nov. 14-15. The Breakers also dropped a close 3-1 decision to the Vipers Nov. 8 after tying the No. 2 East Coast Wizards Nov. 7. These two teams met in October, with Assabet earning 3-2 and 5-1 victories. Assabet tied the No. 3 Eagles Nov. 29 and lost a 2-1 heartbreaker to the No. 2 Wizards Nov. 21 after beating the Eagles and No. 5 Vipers Nov. 7 and 14.