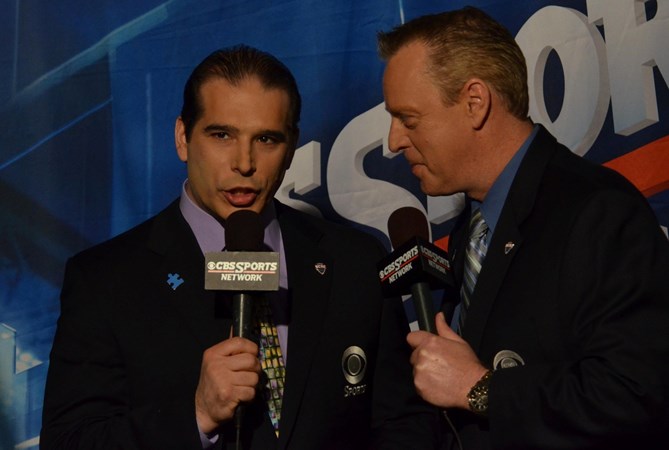 A View From the Pod With Dave Starman - Week 1

By Dave Starman via Scott Lowe for MYHockeyRankings.com

If you missed the first week of action from the National Collegiate Hockey Conference’s “pod” in Omaha, don’t worry. We’ve got a special treat for you.

No one watches more college hockey than Dave Starman, the voice of college hockey for CBS Sports Network since 2003 and one of the voices of the World Junior Championships in the United States. He will be in the “pod” with all eight NCHC teams until Dec. 21, watching or calling the majority of the 38 conference games that will be played, and he has agreed to spend time with us each week to provide his insight on bubble life in Omaha.

For those who don’t know, because of continued spread of COVID-19 in the United States, the NCHC created a plan to send each of its eight member teams to a “pod” in Omaha, Neb., to compete in the first portion of the league schedule between Dec. 1 and 20 at Baxter Arena.

The teams, league staff and television production crew are split up among several hotels that are within a five-minute walk of the arena in an area called Aksarben Village. “That’s Nebraska spelled backwards,” Starman pointed out on our call to review Week 1 in the “pod.”

“Baxter arena is a really nice rink, and in the last three or four years, condos and residences, bars, restaurants, hotels and shopping have sprouted up as they’ve created a village that’s within walking distance of the arena,” he said. “Everything is within a short walk, so you don’t have to deal with logistics or players getting on buses, and people can come and go as they please."

Normally that freedom would be nice and something to take advantage of, but in the age of COVID everyone has to pay attention to the necessary precautions put in place by the NCHC.

“The rules are that you can basically go to the hotel and the rink and that’s it,” Starman said. “We wear masks everywhere – except for the players when they are on the ice – even the coaches have been wearing them on the bench, and if you want to pop in somewhere to pick up take-out food that’s fine, but we aren’t allowed to eat in any restaurants.”

While the rules might be seen as a nuisance by some, the Omaha “pod” is a hockey fan’s dream and an opportunity that as a hockey junkie Starman is thrilled to have. He said it seems like the players and coaches are just as excited as he is to be there.

“Everyone seems to have the same mindset,” he said. “We are all just really glad to be here. I can tell you this, a couple of teams told me that they had to put their defensemen in one locker room and their forwards in another locker room, because maybe that day they were given the 8th room or whatever. But nobody is complaining. Nobody has said a word. They are thrilled to be here for eight games, and some were even looking to play 10 or 12 games and were ready to stay until Christmas Day if they could. It’s been great so far, and everyone seems to really be enjoying the experience.”

The excitement has translated to the ice, where Starman said that the intensity has been high since the first puck dropped and most teams only took a few periods to work out the kinks before ramping up their level of play

“The intensity has been off the charts,” he said. “For most of the teams their first few periods were a little bit scrambly, but now that each team is two or three games in, it looks like the hockey we’ve come to expect. The intensity is good, and they all are just ecstatic to be playing. The feeling you get is that they see every shift as a blessing and are really ready to get after it. There’s been a little bit of snarl to the games, too, which has been good.”

One of the top NCAA Division I men’s hockey conferences, the NCHC placed four teams – North Dakota (1), Minnesota Duluth (3), Denver (5) and Western Michigan (18) among the nation’s top 20, according to the USCHO.com preseason poll, with St. Cloud and Omaha also receiving votes. After one week in the “pod,” North Dakota and UMD have held on to their spots thanks to their 3-0 starts, while Denver has fallen to ninth after dropping its first three contests. St. Cloud has moved up to 13th by going 3-0, and Omaha checks in a 18th after splitting its first four contests.

Western Michigan, which lost several key players who moved on to professional hockey, is still receiving votes after losing three times, while Miami also has gone 0-3 and Colorado College has yet to play.

Here are some of Dave Starman’s thoughts after one week in the Omaha “pod:”

“I know people are going to think I’m crazy for saying this, but even at 0-3 Denver has been good. They haven’t been finishing games and have had some hiccups but what I’ve seen out of them so far has been really good. If they were in any other league, they’d probably be 3-0 instead of 0-3. They are fast and skilled and may be the best 0-3 team ever. There’s an NHL scout who’s a buddy of mine who said he wouldn’t be surprised if they went on from here to be 7-3.”

“St. Cloud is really fast – as fast as I’ve ever seen them – and that has really been popping out when they are on the ice. UMD has been good systemically, but they haven’t been great overall yet. They’ve managed the games well in all three of their wins. I’ve only seen North Dakota once; they are obviously very good and have great depth, but I’m going to reserve judgment. They are really loaded for bear and so deep. Omaha has been great despite losing {Sunday} night. I give them high marks; they’ve looked very good. Even in that loss you could see that they defend, have speed and size, can possess the puck and play a really intense, pressuring style.

Team on the Rise – Miami

“Miami is most likely to leave Omaha as the most improved team in year two under {Head Coach} Chris Bergeron. They are a different team from last year. I think year one under a new coach tends to be a transition year as the players and staff get to know one another, but now in year two, this group is starting to play with the intensity that he did. He was one of the most intense players I ever coached against, and the team is starting to take on that level of intensity. And Miami’s goaltending situation appears to be in good hands; their two kids {Ben Craws and Ludvig Persson} have been good.”

“It’s very interesting to see what’s going on with Western Michigan right now. That’s a team that lost its stud goalie and lost three very good D to the pros from last year. With the injuries they’ve had to deal with, now their top four or five defensemen are out of the lineup, and they are much thinner up front because of their losses to pro hockey. Their centers are going to have to slot up one spot in the lineup, and they are going to be without a guy you could count on to make 35 saves a night. They are very well coached … and are going to have to use their time in the ‘pod’ to refine their approach and figure out the way they need to play to have the best chance to be successful.”

“Ryan Fanti has been the standout in goal, going 3-0 the first week. Hunter Shepard established himself as a guy who was going to be very difficult to replace and a huge loss in goal for UMD. I don’t know that anyone expected them to be 3-0 right now, but Fanti has answered the bell every single period and every single game and has been the story of the “pod.” Of all the goalies, he’s stood out the most so far.”

Goalie of the Week

Fanti was named NCHC Goalie of the Week, stopping 80 of 87 shots fired his way for a .920 save percentage in addition to posting three victories and a 2.33 goals-against average (GAA). He earned second-star honors for his 28-save effort in a 2-1 victory against then-No. 4 Denver and was the only NCHC goalie to go 3-0 the during the season’s first week.

Rookie of the Week

Miller recorded five points on three goals and two assists in his first four collegiate outings and enters Week 2 in the “pod” on a three-game point streak. He is tied for the league lead in scoring and was plus-4 for the week.

Frisch had a point in each of his three games as part of a defensive unit that helped North Dakota record a shutout and allowed just five goals. Frisch was plus-3 in a win over Western Michigan and finished the week plus-5.

Pinto’s second season got off to a roaring start as he recorded a pair of multi-point games to help his team go 3-0 in Week 1. He finished the week with two goals and three assists and went 18-0 on faceoffs in an overtime win against Denver. Pinto was 47-17 for the week on faceoffs (.734), plus-3 and had 12 shots on goal.

The full NCHC schedule can be found by clicking here. There are 14 games on tap this week, starting Tuesday at 12:30 p.m. EST when Colorado College sees its first action of the season against a Western Michigan team looking to right the ship after an 0-3 start in which the Broncos have been outscored, 22-7. In other notable action:

All games from the “pod” can be seen on NCHC.TV or CBS Sports Network.