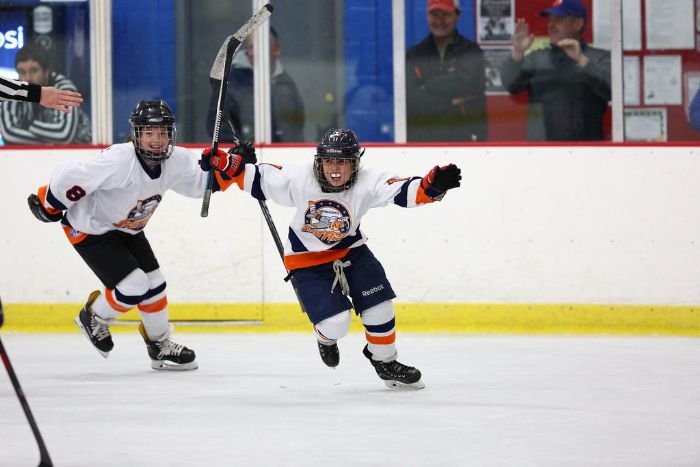 As COVID-19 continues to spread, we still have enough leagues sup and running to provide some great matchups of ranked team during the Week 8 weekend. Please remember, for your own safety, the safety of others and so that at some point kids around North America can get back to playing, to follow out state, local, league and facility guidelines when it comes to COVID. We are happy for the players and teams who are still on the ice, but also want to see everyone have a chance to get back out there as soon as possible.

This week, our MyHockeyRankings/LiveBarn Featured Game of the Week is another great top-five matchup at the 12U USA Girls’ Tier 1 level as the top-ranked Massachusetts Spitfires face the third-ranked Boston Jr. Eagles at 5 p.m. Saturday in a game that can be seen live or on-demand via www.LiveBarn.com. We also have a 14U girls’ top-20 matchup as well as a boys’ top-10 matchup in boys’ 12U and a top-15 contest in boys’ 18U.

The 9-1-0 Spitfires and 9-6-2 Jr. Eagles meet for the second time this season Saturday in a New England Girls Hockey League matchup at Foxboro Sports Center in Foxboro, Mass. In their previous meeting, way back on Sept. 19, the Spitfires skated to a 7-1 victory. All nine of the Mass victories have come in NEGHL play, which leaves them on top of the NEGHL 12U National Upper Fall 2020 standings. The Jr. Eagles are 5-5-2 in league play, good for third place. The Spitfires’ lone loss of the season came vs. the No. 2 East Coast Wizards by a 7-2 score Oct. 11. Mass responded to that by earning a 3-2 victory over the Wizards the next day. They also have four victories against the seventh-ranked Bay State Breakers, a victory over No. 4 Assabet Valley and a pair of wins vs. the North Shore Vipers. The Spitfires have outscored their opponents, 50-16, for the season with seven of those goals allowed coming in the loss to the Wizards. Boston has played an equally difficult schedule, splitting a pair of games with the No. 7 Breakers last weekend and also knocking them off, 6-3, Oct. 17. The Jr. Eagles dropped a 2-1 decision to No. 4 Assabet Valley Nov. 7 after falling to them Sept. 20 and beating them in the season opener Sept. 12. They have gone 0-1-2 against the second-ranked Wizards, and 2-0 vs. the fifth-ranked Vipers. Boston has outscored its foes, 55-44.

The Jr. Flyers take on the Colonials in a Mid-Atlantic Women’s Hockey Association game Saturday in New Jersey. This is the third meeting of these two teams on the season, and they have split the first two. The Colonials earned a 2-1 victory Nov. 1, with the Jr. Flyers skating to a 5-1 win on Oct. 18. Philly has won its last three contests since that loss to New Jersey, with all of those victories coming against No. 9 Pittsburgh Penguins Elite by an 8-1 total margin that included a pair of shutouts. Those victories avenged an Oct. 24 loss to Pens Elite for the 18-3-0 Jr. Flyers. Philly’s other loss came at the hands of 16th-ranked Team Illinois, 3-2, Oct. 23. During an impressive three-day span Sept. 4-6, the Jr. Flyers beat the No. 2 Mid-Fairfield Stars, No. 6 (tie) Valley Jr. Warriors and No. 6 (tie) Little Caesars by a combined score of 11-0. They have outscored their opponents, 90-18. New Jersey brings a 14-5-5 mark into the weekend, which includes a current nine-game unbeaten streak (8-0-1) since that 5-1 loss to the Jr. Flyers Oct. 18. The Colonials went 0-1-1 in a pair of contests vs. No. 6 Valley, tied No. 1 Assabet Valley Sept. 26 and fell to the No. 3 East Coast Wizards by a 2-0 margin Sept. 26. They also opened the season by splitting two contests with Mid-Fairfield Stars Minor, the second-ranked 14U Tier 2 team in the nation. New Jersey has outscored its opponents, 85-44.

It’s a 12U Pee Wee matchup of Eastern Hockey Federation teams as the third-ranked Boston Jr. Eagles and No. 6 Top Gun face off Saturday morning in a non-league contest in East Boston. Interestingly, despite the national rankings, Top Gun enters the weekend leading the EHF at 8-1-1, while the Jr. Eagles are in third place at 6-4-1. Overall, Boston has gone 11-8-4 against a daunting early season schedule, with Top Gun having posted a 13-4-2 overall mark to date. The two teams skated to a 1-1 tie Aug. 29, but the Jr. Eagles earned a 5-0 victory in the Sept. 20 rematch. Boston is unbeaten in its last five outings (4-0-1) since an Oct. 10 loss to No. 16 CP Dynamo. That came after a 5-0 win against CP, which followed three straight losses – one against the No. 17 team and two vs. the top-ranked Mid-Fairfield Jr. Rangers. Prior to that three-game skid, Boston swept a pair of games against the eighth-ranked Connecticut Jr. Whalers by a combined 13-4 score. The Jr. Eagles have played six of the nation’s top 11 teams so far and have outscored their opponents by a 90-55 margin overall. Top Gun brings a four-game unbeaten streak (3-0-1) into the weekend since a 2-1 loss to the No. 8 Jr. Whalers Oct. 10. They won four straight after the Sept. 20 loss vs. the Jr. Eagles. Top Gun’s only losses thus far, in addition to the Boston setback, came against the No. 5 Minuteman Flames (two) and the Jr. Whalers. They also beat Connecticut, 3-0 Sept. 12 and 5-3 Sept. 13, while earning a 3-2 win against the No. 5 Minuteman Flames Sept. 27. Top Gun has outscored its opponents, 13-4-2.

We leave the East Coast and head to Texas for an 18U matchup featuring the No. 10 Anaheim Jr. Ducks and No. 13 Colorado Rampage Friday at 6:15 p.m. EST. Anaheim is 10-4-0 on the season, including a 4-2 victory over the St. Louis AAA Blues earlier Friday. The Jr. Ducks dropped a pair of games against NorthStar Christian Academy (No. 6 overall 18U) and the Oakland Jr. Grizzlies (No. 7 Tier 1 18U) Halloween weekend. They also beat NorthStar Christian that weekend by a 5-2 margin, a victory that ran their winning streak at the time to seven games. Anaheim opened the campaign by going 11-2-0, a run that included a pair of wins against the No. 16 Rocky Mountain RoughRiders. The Jr. Ducks have oustcored their foes, 48-34, allowing one goal or fewer five times. Colorado enters the weekend at 12-2-0 and riding a six-game winning streak dating to a 4-1 loss against the No. 31 AAA Blues Oct. 10. Their only other loss of the season was a 5-2 setback vs. No. 16 Rocky Mountain Sept. 5. Among their victories are wins vs. the No. 11 Nashville Jr. Predators and No. 15 Dallas Stars Elite. Earlier Friday they beat the LA Jr. Kings, 6-1, and have outscored their opponents, 48-25 for the year.