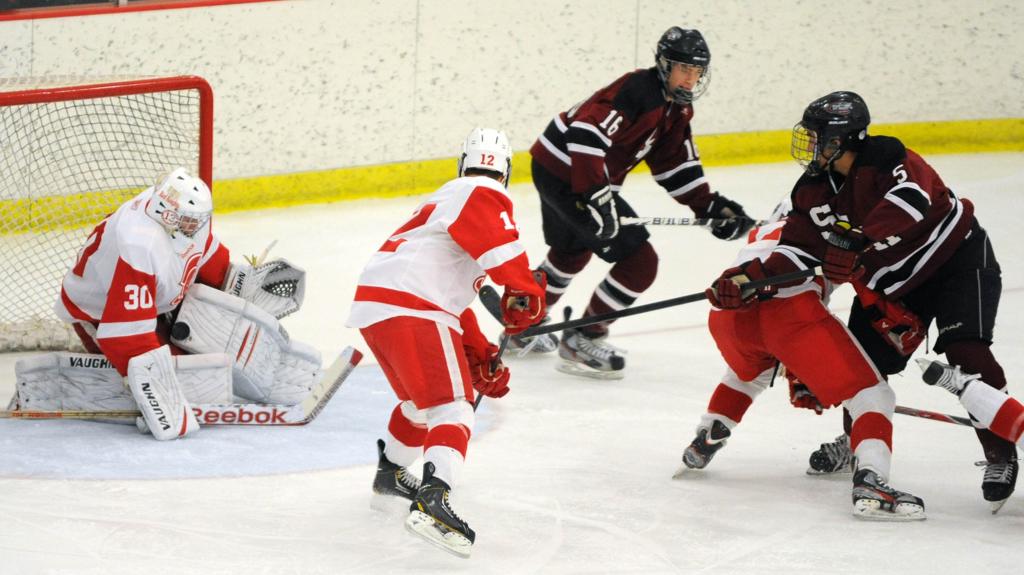 Week 6 MHR Games of the Week

Last week our featured game of the week included the top-two teams in the United States at the Pee Wee Major or 12U level, with the now top-ranked Mid-Fairfield Rangers knocking off the second-ranked LA Jr. Kings in a 3-2 thriller in Connecticut. This week we are fortunate to have a 1 vs. 3 matchup at the 18U level as top-ranked Shattuck-St. Mary’s takes on No. 3 Pittsburgh Penguins Elite in Minnesota Saturday afternoon.

And our featured LiveBarn Game of the Week is an interesting matchup as an unbeaten Wilkes Barre/Scranton team that is looking to make a splash in the rankings at 20-0-2 travels to Connecticut to take on the ninth-ranked Connecticut Jr. Whalers Sunday. This week’s slate also has a pair of great girls’ matchups, with the No. 4 New Jersey Colonials taking on the No. 8 Connecticut Ice Cats in a 12U contest Saturday and No. 2 Little Caesars 16U heading to Ohio for a three-game series against No. 13 Gilmour Academy that starts Saturday.

The ninth-ranked Whalers host the unbeaten Knights, who have not lost in their first 22 games (20-0-2), in an Atlantic Youth Hockey League matchup. Connecticut brings a 10-5-3 record into the contest after having played 15 of its first 18 contests against teams ranked among the nation’s top 15. Eleven of those games have come vs. top-10 clubs, and they have posted an impressive 6-4-1 record in those matchups. The Whalers earned a pair of wins vs. the No. 3 Boston Jr. Eagles, two victories over the No. 7 Long Island Gulls and a win against fifth-ranked Top Gun. They have outscored their opponents 55-53 for the season, indicative of the difficult schedule they had played. WBS is searching for a signature win to help boost its position in the national rankings. The Knights’ two ties so far came against the Pal Jr. Islanders Sept. 27 and New Jersey Devils Oct. 17. Their best wins to date came vs. the No. 17 North Jersey Avalanche Sept. 26, the No. 36 Washington Little Caps Oct. 11 and the No. 34 Philadelphia Flyers Elite Oct. 25. WSB has outscored its opponents, 125-33, while recording seven shutouts.

Shattuck-St. Mary’s, always one of the nation’s top programs from the 14U age group through 18U, takes on third-ranked Pens Elite in New Hope Minnesota at noon Eastern time on Saturday in a big 18U tilt. Shattuck enters the weekend with a 9-1-1 record, but coming off a 7-3 loss to Minnesota Elite (TCOrtho) Oct. 25 in Minnesota hockey action. Earlier in the year the Sabres knocked off the same team by a 5-3 margin after opening the season with a pair of victories against No. 27 Team North Dakota by scores of 6-1 and 5-4. SSM has outscored its opponents, 58-25, to date. Pens Elite enters the weekend with a 12-1-0 record and on a five-game winning streak since a 3-2 overtime loss to the No. 42 Buffalo Jr. Sabres Oct. 27. They had beaten the Jr. Sabres, 9-3, the previous day and own victories over No. 9 Belle Tire, No. 24 Esmark Stars, No. 7 North Jersey Avalanche and No. 12 Victory Honda. Pens Elite have outscored their opponents, 52-16, this year while recording four shutouts. They have allowed just two goals in their last five games.

The Colonials host the Ice Cats Sunday in a matchup of top-10 12U girls’ teams. New Jersey brings an 8-2-1 record into the weekend, while Connecticut is 6-2-2. The Colonials are coming off a 3-2 overtime victory against the New Jersey Freeze, which extended their winning streak to seven games since a pair of 3-2 losses to the third-ranked Boston Jr. Eagles Sept. 27. They have earned victories over the Nos. 15, 21 and 27 teams so far while outscoring their foes, 45-17, and recording a pair of shutouts. The Colonials and Ice Cats skated to a 1-1 tie to open the season Aug. 13. Connecticut also tied the 21st-ranked Mid-Fairfield Stars, 2-2, in its most recent outing Oct. 18. The Ice Cats are unbeaten in their last three contests dating to a 5-0 Oct. 10 loss to the No. 3 Jr. Eagles. They have recorded wins against the Nos. 19, 23, and 30 teams, outscoring their opponents, 37-17, for the season.

No. 2 Little Caesars travels to Ohio for a three-game weekend vs. the Gilmour Gladiators Saturday and Sunday. LC, which brings a sparkling 18-0-1 record into the series, will take on the Gilmour 19U team Saturday afternoon and Sunday morning before facing the 16U team Sunday afternoon. The lone blemish on LC's record is a 3-3 tie vs. No. 3 Minnesota Elite Grey Oct. 16. These two teams met in a pair of games Oct. 19, with Little Caesars winning by 7-3 and 8-3 margins. LC has played an impressive schedule to date, with all but one contest coming against teams ranked among the nation’s top 26. They have beaten the Nos. 5, 6, 8 and 9 teams in the nation while rolling to a 103-17 goal differential and recording 10 shutouts. Gilmour’s three goals in each contest the last time these two teams met are tied for the most that Little Caesars has surrendered in a game. The Gladiators are 10-5-0 on the year. Their losses to LC came in their first two games of the season, so they have gone 10-3-0 since then, including victories in their last five outings. Their other losses came against No. 22 Honeybaked, who they also beat, 1-0, and the No. 19 Buffalo Bisons. Gilmour beat the No. 18 Jr. Flyers, No. 16 Belle Tire (twice), No. 21 Chicago Young Americans and No. 14 St. Louis Lady Blues. The Gladiators have outscored their opponents, 45-32.