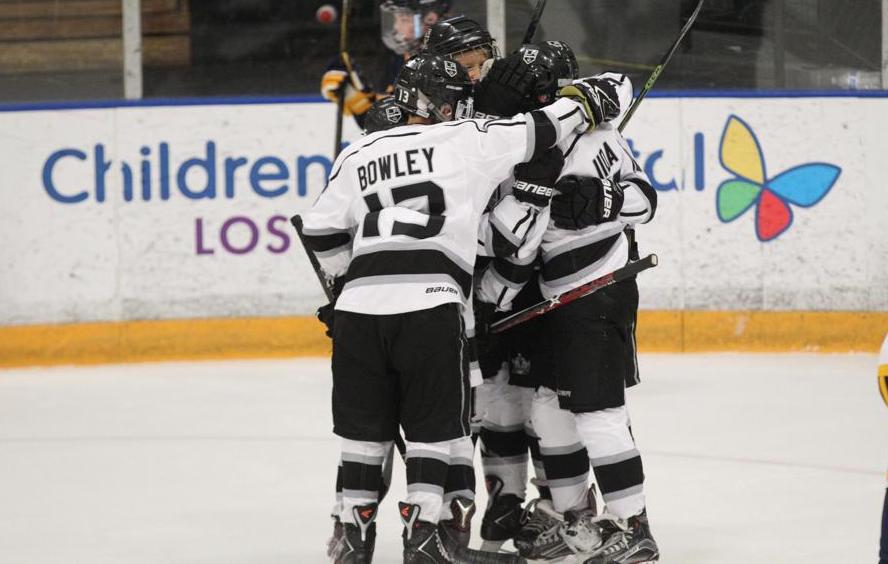 Great news about our Week 5 MYHockeyRankings.com Games of the Week; we have an early season matchup of the nation’s top-two teams at the USA Boys’ Tier 1 level! The top-ranked LA Jr. Kings travel across country to take on the No. 2 Mid-Fairfield Jr. Rangers Saturday morning at Champions Skating Center in Cromwell, Conn. Trick or treat? Luxury Skeleton Watches

This week’s balanced slate of games features two boys' and two girls’ Tier 1 matchups, three of which are happening in Connecticut. Our games feature teams ranked between No. 1 and No. 18 in their respective age groups, and ALL of them should be streamed live and on demand by our partners at LiveBarn.

The LA Jr. Kings slid into the top spot by opening the season with six straight victories as they prepare to take on the second-ranked Jr. Rangers this weekend in enemy territory. In the process of going 6-0, the Kings have outscored their opponents, 33-12, and have two wins against No. 13 Team Illinois (5-2 and 3-1) to go along with victories over No. 5 Little Caesars (3-2) and No. 3 Chicago Fury (8-3). LA opened the year with a pair of 7-2 wins vs. the Indy Fuel and No. 33 Oakland Jr. Grizzlies. Mid-Fairfield is unbeaten in 12 of its first 13 contests while facing a difficult schedule, but four ties are included in the team’s 8-4-1 record. They opened their season with a win and a tie vs. the eighth-ranked Minuteman Flames then ripped off seven straight victories before suffering their lone setback, a 4-2 decision against No. 9 Top Gun. They tied Top gun the next day, which would turn out to be the first of three straight deadlocks. Two of the ties came vs. the No. 10 Boston Jr. Terriers. Two of Mid-Fairfield’s earlier victories came against the seventh-ranked Boston Jr. Eagles, and they also knocked off the No. 12 Long Island Gulls. The Jr. Rangers have outscored their opponents, 73-50.

It’s a clash of the Midwest titans Friday night at 8 p.m. in Michigan on LiveBarn as No. 2 Compuware takes on the No. 5 Chicago Young Americans in a Tier 1 15U tilt. This is the sixth meeting of the teams already this season, with Compuware holding a 3-2 advantage in the series and a scoring edge of 9-7. Compuware enters the weekend with a record of 14-3-2 and having outscored its opponents, 77-26. They just earned a pair of wins against the 15th-ranked Oakland Jr. Grizzlies coming off a 3-2 overtime loss to top-ranked Honeybaked, a 2-2 tie against No. 14 Little Caesars and a 1-0 setback against the Young Americans. Compuware opened the year with 13 wins in its first 15 outings before that recent stretch (13-1-1). That season-opening run included two victories against the No. 3 Minnesota Blades and wins against No. 1 Honeybaked and the No. 15 Jr. Grizzlies as well as the three wins vs. the No. 5 Young Americans. They also knocked off sixth-ranked Team Wisconsin. In addition to posting a 2-3 mark against Compuware, CYA has gone 10-6-1 in its other 17 outings. They are 3-5-1 in their last nine contests after winning six of eight games leading up to that stretch. CYA has beaten No. 4 Florida Alliance, No. 10 Minnesota Blizzard (twice), No. 2 Compuware (twice), No. 1 Honeybaked and No. 6 Team Wisconsin. The Young Americans have outscored their opponents, 62-46.

Moving over to the girls’ side of things and back to the great state of Connecticut, we have an all Nutmeg State 14U matchup between the No. 10 Mid-Fairfield stars and 15th-ranked Hartford Jr. Wolfpack on Sunday morning. Mid-Fairfield brings a 13-3-1 record into the weekend, having outscored its opponents, 42-20. These two teams opened the season on Aug. 23, with Mid-Fairfield skating to a 2-0 victory. The Stars are unbeaten in their last five contests (4-0-1) and 8-2-1 in their last 11. They have recorded seven shutouts thus far, including four in their first four games. One of their losses was a 3-0 decision Sept. 6 against the No. 8 Jr. Flyers, and they also lost a pair of games against the No. 2 East Coast Wizards after beating the Wizards, 2-1, Sept. 20. The Jr. Wolfpack carry an 8-4-3 mark into the weekend, including a 2-0-1 record in their last three outings and a 6-2-3 record in the last 11. They have outscored their opponents, 48-26, to date and earned a 3-3 tie against the No. 9 Rome Grizzlies in their last outing.

We stay in Connecticut for a neighbor-state rivalry 12U matchup between the 18th-ranked Hartford Jr. Wolfpack and the No. 8 Springfield Jr. Thunderbirds from Western Massachusetts on Halloween. Springfield has opened its season with a 12-2-1 record while outscoring its foes, 52-19. They are unbeaten in their last three contests (2-0-1) since falling to the 21st-ranked Mid-Fairfield Stars Oct. 3. The Thunderbirds avenged that loss in their most-recent game with a 3-2 Oct. 17 win against the Stars. Both of their losses this year have come against Mid-Fairfield, and they also have beaten the Stars twice. Springfield knocked off Hartford, 6-1 Sept. 27 and 2-1, Sept. 7 in their two previous meetings. The Thunderbirds have victories against the 15th-ranked Syracuse Nationals and 17th-ranked Valley Jr. Warriors. They also shut out the No. 11 Connecticut Jr. Rangers, 5-0. The Jr. Wolfpack are 6-4-4 overall and 2-3-4 in their last nine contests. They earned ties against the No. 11 Connecticut Jr. Rangers and No. 13 Connecticut Northern Lights in their last two outings and also beat the Northern Lights, 5-3, Sept. 4. They have outscored their opponents, 40-32.