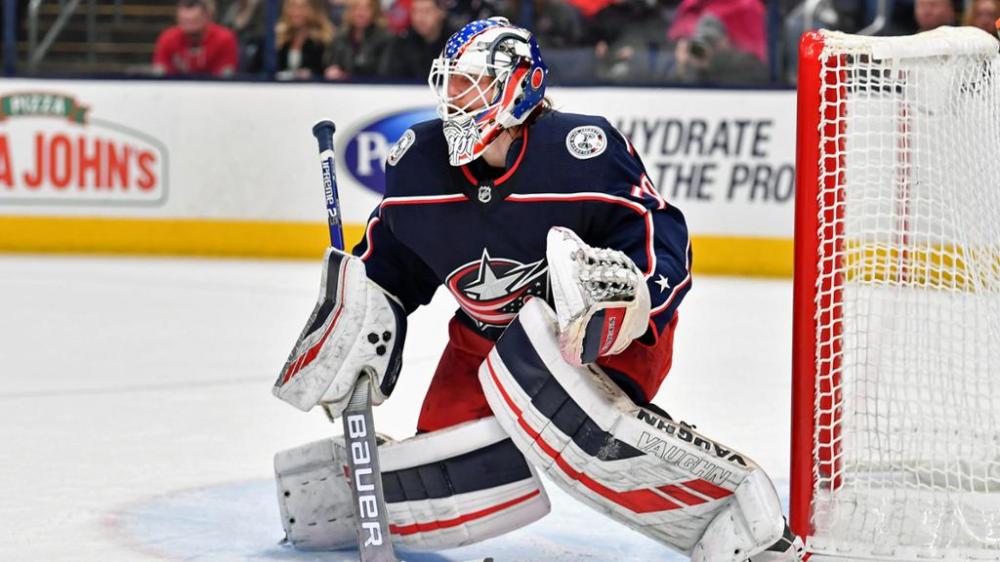 Most parents of hockey goalies probably figured this out about five minutes into their child’s first game between the pipes, but for anyone raising youngsters who are thinking about donning the pads and entering the whacky world of goaltending, these NHL Playoffs might change your mind.

While it might be hard to keep kids from watching the rest of the NHL Playoffs (I mean, what else do they have to do?) to avoid their witnessing any more of the carnage, goalie parents might want to try convincing them to watch the NBA or MLB playoffs or possibly to tune to the Food Network.

About 24 hours ago I was prepared to write about all the amazing goaltending performances we had seen to date and talk about goalies stealing series, but instead it looks like this postseason has the potential to chew up and spit out even the best netminders.

Columbus goalie Joonas Korpisalo, who was the Blue Jackets’ backup behind now-injured Elvis Merzlikins entering the playoffs, performed tremendously in leading his team to a thrilling five-game Qualifying Round win against the high-powered Toronto Maple Leafs.

He recorded 33 saves in a Game 5 shutout of the Leafs vaunted group of talented forwards, and in four outings vs. Toronto Korpisalo went 3-1, allowed just five goals and posted a .956 save percentage. But he also found himself on the bench for the one game Merzlikins was deemed fit to play.

"I couldn't be more happy and excited for Korpi," Blue Down Jackets forward Cam Atkinson told NHL.com. "It's all about opportunity, and having {Sergei Bobrovsky} the last X amount of years, it's been hard for Korpi to really get a shot and to get his feet wet and just play on a regular basis. I've known all along how good Korpi is, just how he worked and how he battles and competes in practice and takes care of himself on the ice. I'm just happy that it's all working out for him. He was an All-Star this season for a reason."

He was an All-Star who still entered the postseason as a backup, so for an encore Korpisalo made an NHL playoff-record 88 saves while allowing three goals (that’s a .966 save percentage) in an amazing five-overtime game against Tampa Bay in Game 1 of his team’s first-round series. And he lost.

Against the Lightning Korpisalo stopped 121 of the first 125 shots he faced (.968) and has a .950 save percentage and 1.64 GAA for the series. His team trails 3-1, and knowing John Tortorella, if Merzlikins would somehow be available for Game 5 you might just see a change.

On Saturday, Arizona Coyotes goalie Darcy Kuemper made 49 saves to singlehandedly steal a 4-2 victory over ultra-talented Colorado and cut the Yotes’ series deficit to 2-1. The former Vezina Trophy-finalist stopped 42 shots in a 4-3 overtime victory against Nashville to clinch Arizona’s Qualifying Round series and followed that up with 40 saves in a 3-0 first-round opening-game loss to the Avs.

“If he’s seeing it, he’s stopping it,” Colorado coach Jared Bednar told the Denver Post after Keumper stole Game 3 and got the Coyotes back in their opening-round series.

That’s 92 saves in back-to-back games for you math majors, and so far against Colorado he has faced 36 shots per contest through five appearances. But Monday Kuemper allowed four goals on 22 shots and was yanked after two periods in a 7-1 loss. Despite his efforts, Arizona trails in the series, 3-1

St. Louis Blues’ goalie Jordan Binnington was the feel-good story of 2019. The career minor-league netminder was thrust into action with his team in last place in January, and he led the Blues all the way to their first Stanley Cup with a miraculous run that ended in Boston with a Game 7 victory in the Finals.

Then he lost his first two starts of St. Louis’ first-round matchup with Vancouver. So, head coach Craig Berube gave his goalie a day off, presumably to let him clear his mind and rest since the Blues were going to be playing on back-to-back days.

"[Allen] was excellent," Blues head coach Craig Berube told NHL.com after Game 3. "We hadn't got a win yet so changed it up, and Jake's been a real good goalie for us all year and again he was tonight. He's extremely prepared, works extremely hard. He doesn't take much time off. He's always out there practicing, whether it's on the ice or video. Just staying prepared. He's a real good pro."

Last year’s Cinderalla story, Binnington may not see action again in the 2020 playoffs. If that’s the case he will finish with a 0-4 record, 4.27 and .862 save percentage. Anyone who watched those games realizes the entire St. Louis team looked sluggish and mostly disinterested, but Binnington wasn’t able to be Superman this time around, so now he’s on the bench.

The Washington Capitals' playoff hero from their 2018 Stanley Cup run, Braden Holtby hasn’t fared much better than Binnington in the 2020 postseason. Holtby’s numbers to date are superior to Binnington’s, and he almost willed his team to victory in a 2-1 overtime loss to the New York Islanders Sunday, but the bottom line is that the Caps have dropped their first three first-round games against former-coach Barry Trotz.

Although Holtby has a respectable 2.67 goals-against average and a .907 save percentage in the playoffs, he has been a victim of his team’s lethargic play and his record is 1-5. If rookie Ilya Samsonov hadn’t suffered an injury while back home in Russia during the league’s COVID-19 shutdown, you can bet that he would have been given a shot between the pipes by now.

The saddest part for Holtby, who just two years ago made “The Save” to allow the Capitals to hold on to a Game 2 victory against Vegas in the Stanley Cup Finals before going on to win the next three games and the Cup, is that his 10-year career in Washington likely will end whenever the team is eliminated. The fan favorite and former Vezina winner will be an unrestricted free agent after the playoffs and figures to be too expensive coming off his worst statistical season for the salary-cap-strapped Caps to be able to keep him.

For Price there are no questions at this point. Montreal is going to live and die with him after he backstopped the Canadiens’ huge Qualifying Round upset of Pittsburgh. But Hart, who was yanked from a game against Price during the regular season and admitted to being a little star struck, was on top of the world after a 27-save, 2-1 victory against his idol in Game 1 only to be pulled in Game 2 after allowing four goals on 26 shots in 38 minutes.

Hart, though, also isn’t going anywhere for a team that has been looking for a bona fide franchise goalie for as long as any of us can remember. He rebounded to turn in a 22-save shutout in Game 3 Sunday as Philly took a 2-1 series lead.

The truth of the matter is that goalies probably get too much credit for most victories and take too much blame when a team loses. Certainly a hot goalie can steal a game and possibly even a series, but the teams that go far in the playoffs have a full roster of players buying into their coach’s system, are willing to pay the price to win by playing a physical and defensive style and bring a consistent effort in all three zones to every game.

Looking at the top-four goalies in terms of wins for this year’s playoffs, these are not the guys who are stealing games. They are the ones who are benefitting from solid game plans and teammates who are buying into their coach’s system and giving the most consistent effort.

Islanders goalie Semyon Varlamov leads the group with a 1.71 goals-against average and six victories. He also has a very strong .932 save percentage, but has rarely been challenged as his teammates have stifled the usually powerful Washington offense in their first-round matchup.

While he did make two huge overtime saves on Jakub Vrana’s overtime breakaway Sunday, Varlamov’s teammates have dominated possession and given the Caps fits by executing Trotz’ suffocating defensive system. Washington only has 74 shots on goal in the series, many from the outside, and managed to direct just 23 shots on net in Sunday’s overtime loss.

Cam Talbot has posted a 5-3 record and a 2.19 GAA while stopping 93.3 shots fired his way thus far backstopping a Calgary team that plays a fast and physical playoff style and is anchored by last year’s Norris Trophy-winner Mark Giordano.

Tampa Bay’s Andrei Vasilevskiy, last year’s Vezina recipient, is playing behind a motivated, balanced and well-coached team that has competed hard right from the start in hopes of making up for last year’s embarrassing playoff exit. He is tied for second with five postseason wins, has a GAA of 1.76 and has posted a strong .932 save percentage.

Oh, by the way, the forgotten man in the five-overtime game despite winning, Vasilevskiy “only” stopped 63 shots while Korpisalo was making 88 saves. That is telling, though, because if you take out that game, the Bolts have surrendered just 26 shots per outing to make it easier on their netminder.

The other goalie with five postseason wins is Vancouver’s Jacob Markstrom, who is 5-3 with a 2.42 GAA and .937 save percentage. While his GAA suffers a little because of his team’s more wide-open style of play, Markstrom’s teammates play hard and fast and challenge other teams to keep up. With their young talent and legs, the Canucks have proven to be a very tough matchup in a tournament where teams are coming off a four-plus month layoff.

In another interesting episode of “As the Goalies Turn,” Boston Vezina Trophy-finalist Tuuka Rask decided to leave the Toronto bubble to be with his family, thrusting veteran Jaroslav Halak, who probably had no thoughts of playing barring an injury, into the starting role.

Halak’s Bruins teammates, who sleepwalked through round-robin play with an 0-4 record and didn’t look much more inspired in their first-two first-round games against Carolina, have rallied around their backup and looked like the team that lost in last year’s Finals with Halak in goal. The B’s now lead that series, 3-1.

And finally, former Stanley Cup-champion netminder Corey Crawford returned from a bout with COVID-19 to inspire his 12th-seeded Chicago Blackhawks to a shocking upset of fifth-seeded Edmonton in the Qualifying Round. Then, after Chicago dropped the first three games to Vegas in the next round, Crawford made 48 saves in his team’s 3-1 elimination-game victory Sunday.

The hero against the Oilers and vs. the Golden Knights just two short days ago, Crawford could just as easily be the goat when the teams hit the ice for Game 5 Tuesday night.

That’s the life of a hockey goalie.

But you already knew that, right parents?