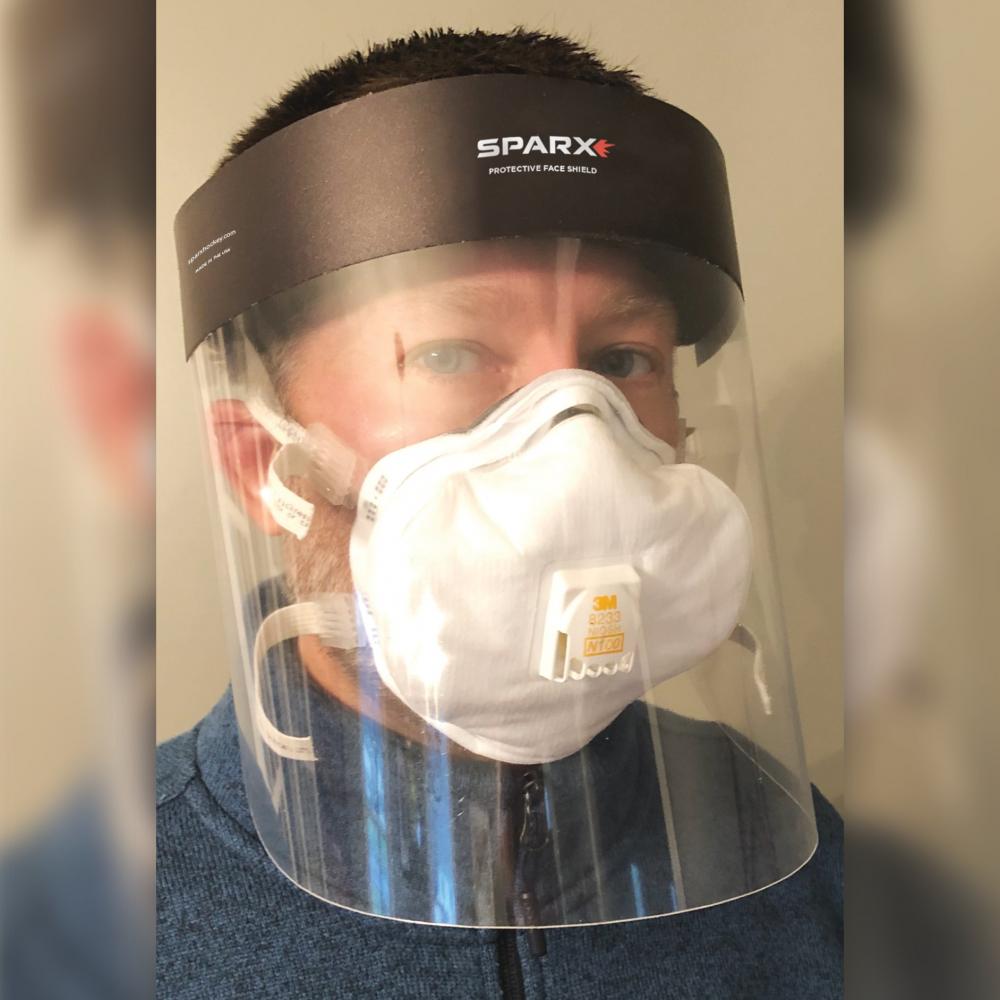 Sparx Steps Up in Time of Need

From the high of being able to award employee bonuses for the first time to the low of having to furlough 70 percent of its staff just a few weeks later to acting quickly and becoming a national leader in the effort to arm front-line essential workers with face shields, the last few months have been quite a rollercoaster ride for Sparx Hockey.

Today, the company that produces portable skate sharpeners for more than 25 National Hockey League teams, as well as countless amateur hockey programs around the world, finds its operation split between founder Russ Layton’s garage and the company’s Acton, Mass, headquarters.

Even his son and daughter are pitching it at home to help keep up with demand while Layton strives to keep as many of his employees working as possible during this difficult time.

But with most ice rinks around North America shut down because of COVID restrictions, this isn’t skate sharpeners we’re talking about

Sparx has reconfigured its production facilities and capabilities to produce much-needed face shields that protect essential emergency and medical workers who are being asked to risk their own lives in the fight against this fast-spreading, potential deadly virus.

Having furloughed 18 employees a few weeks after awarding bonuses, the company that ranked 56th on the 2019 Inc. list of fastest-growing private U.S. companies and was named the fastest-growing U.S. sports brand, announced March 30 that it was repurposing its operation to produce the protective face shields.

“We currently have unused capacity in our manufacturing facility,” Layton said in the company announcement, “and after talking to colleagues at other companies and learning of efforts to make protective face shields, we realized that we, too, could repurpose a portion of our manufacturing facility to make protective shields and help the medical community. We immediately began prototyping, sourcing materials and we will begin building as many units as we can this week.”

One of the other companies Layton spoke to was Bauer, a world leader in the production and sale of hockey equipment with offices in nearby New Hampshire, and its sister company, lacrosse helmet manufacturer Cascade. Layton was tipped off by an employee that Bauer had begun manufacturing protective shields and reached out to learn more and see if Sparx might be able to contribute to the fight against COVID.

Understanding the gravity of the situation and the high demand among the medical community for the shields, Bauer and Cascade happily shared the information Layton sought.

“We were completely overwhelmed within 48 hours with orders for over a million units,” Mary-Kay Messier, Bauer’s vice-president of global marketing, told Sportsnet in Canada. “So, we’ve ramped up our manufacturing capacity to full right now — between the two facilities, they’re bringing off 8,000 units a day, 4,000 in each facility.”'

And that still wasn’t nearly enough to meet the demand, so Bauer started spreading its knowledge in hopes that other companies might grab the ball and run with it. Layton was happy to take the handoff. It was a win-win as not only was Bauer helping fight a global pandemic, but also more companies manufacturing face shields meant more jobs saved.

“We reached out to Bauer; they were fantastic — Bauer and Cascade — in terms of sharing what they had learned so far,” Layton said in the Sportsnet story. “So we began sourcing all the materials, doing our designs, prototyping, and that’s how we launched into it, just kind of both feet in from everyone in the company.”

By the morning of March 31, about 14 hours after announcing the company would be producing the face shields, Sparx already had received more than 25,000 inquiries.

“It’s really very heartwarming and kind of puts a lump in your throat when you read the orders coming in,” Layton told Sportsnet. “We get to see the orders one by one as they come in, and they’re police departments, they’re fire departments, they’re funeral homes, they’re obviously hospitals — it’s amazing how widespread this is. You know, there are orders from California, Detroit, a lot of orders actually from Canada. We even got a gigantic order from Sweden.”

Just as heartwarming was the need for Layton to immediately bring back nine of the employees he had furloughed with plans to have the others return as demand and revenue permitted.

“If the demand keeps up for the shield, it’s enough to keep the place employed,” Layton told the Milford Daily News, estimating that Sparx eventually would be able to manufacture 15,000 units per week.

Sparx had produced more than 350 shields within the first week of production and 1,000 a few days later. There was a learning curve and some discoveries such as foam pre-fitted with adhesive that allowed daily production to ramp up to 2,000 units. The need for the foam allowed Layton to help another local business continue operating, while a shortage of elastic had Layton’s family and employees asking neighbors and scouring the internet to find as much as they could.

“We had neighbors dropping off bags of elastic from their sewing kids,” Layton said in the Milford Daily News story.

He also told News@Northeastern:  “One of the nice things about being a small, nimble business is that you can react very quickly. And now we’ve mobilized to help the cause.

The Sparx face shield is 10 inches in length and made out of PETG, a material often used to make water bottles, polyurethane foam and an adjustable elastic strap for a customized fit. It is intended for single use only and is designed to be used only in conjunction with medically approved masks.

Shields can be purchased online here in bundles of 10 for $59, 20 for $118 or 50 for $295 in hopes of accommodating the needs of individuals as well as larger medical organizations and facilities. With pricing that covers only the cost of materials and labor, Sparx is not profiting from sales. There also is a link for anyone who wants to purchase and donate shields.

When Sparx was forced to shut down, Layton had no idea what the future held for the business he had worked so hard to grow since 2013. “It was really hard, because I built this company from nothing,” he told the Milford Daily News.

“People make sacrifices when they go to a startup,” Layton said in the News@Northeastern story. “They believe in you as a person, they believe in the mission and what you’re building. You know who they’re married to, you know their kids, you know what their financial situation is—to lay them off was absolutely heart wrenching.”

Apparently they had good reason to believe in the Sparx founder and his business, which is a corporate partner of MYHockey Rankings.

“It’s exciting to see one of our partners step up like this in a time of crisis not only to find a way to help in the global fight against this terrible pandemic, but also to take care of its own employees,” said Ian Lodin, MYHockey Rankings Director of Business Development. “It says a lot about the principles on which the company was founded, the staff that has been assembled and the ownership. We are happy and proud to call Sparx Hockey a partner.”