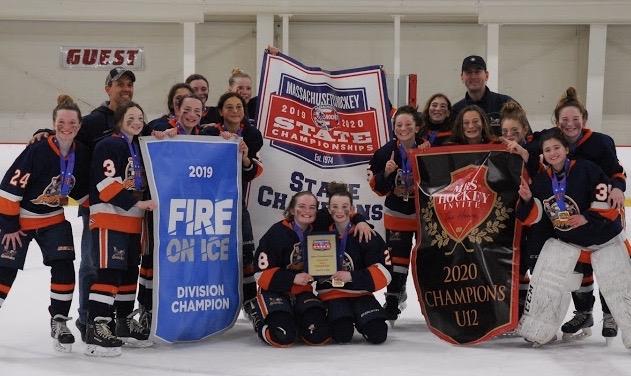 All Great Things Must Come to an End: Massachusetts Spitfires 12U Tribute

This year, the Massachusetts Spitfires became the first 12U Tier 1 girls team since the advent of youth national rankings in 2014 to win 50 games. They accomplished the feat while suffering just four losses and capturing multiple in-season titles on the way to an impressive 53-4-4 overall record and a No. 3 final national ranking.

And unlike so many other highly ranked youth hockey teams this year, the Spitfires were able to conclude their season on the highest of notes.

In their last contest of the 2019-20 campaign, the Massachusetts Tier 1 championship game on March 8, the Spitfires earned a heart-stopping 2-1 victory against the fourth-ranked East Coast Wizards, the team that had handed them three of their four losses. The win not only lifted the Spitfires to a state title, but also gave them a 6-3 final record against their toughest opponent.

Violet Carrol was the hero, netting the game-winner in the extra session.

“Al I remember was the rink erupting, sticks and gloves flying after the happiest feeling of my life,” she said. “The state championship that we had worked so hard for; overtime goal!”

Coach Joe Hulbig, a former NHL player with the Boston Bruins and first-round draft pick of the Edmonton Oilers, reflected on the victory and was thankful his team got the opportunity to finish what it had started since there is no USA Hockey National Championship tournament at the 12U level.

“We feel very fortunate that we were one of the few teams able to finish our season,” he said. “Three days later the stay-at-home order was instituted, and the country was shut down.”

The overtime state-title victory brought to a remarkable end a remarkable season as the Spitfires captured three other in-season tournaments as well as the New England Girls Hockey league regular-season fall and winters crowns. They went 15-0-1 in league play during the fall before posting a 12-1-2 winter record for an overall NEGHL mark of 27-1-3.

The team’s strong NEGHL showing was made even more impressive by the fact that five of the nation’s top 10 12U programs competed in the league.

“Most of our team has been together for 4-5 years, and it has been a talented group that has grown, developed and gotten better each year,” Hulbig said. “With a few key additions this past year, I knew we would be strong and our depth would be an advantage. The question I asked them all season was, ‘How good?’ The choice was theirs on what they could accomplish, and when the season ended with us having lost to only two teams, they answered that question and proved they were the best.”

Although they never got the opportunity to play against the top-ranked Chicago Mission or No. 2 L.A. Lions, it would be hard to argue that the Spitfires weren’t at least as good as any team in the nation given their impressive resume that included a 13-4-4 record against teams ranked among the USA’s top 10 and victories against 13 of the nation’s top 20 clubs.

They also defeated Canada’s No. 8 and No. 15 teams, with their only losses coming against the fourth- and fifth-ranked teams in the U.S. In addition, each of their four deadlocks were with teams ranked among the U.S. top 10. The Spitfires outscored their opponents by an astonishing 265-45 margin and held their foes to one goal or fewer in each of the first 19 games of the season – and 52 times overall.

Led by goaltender Jack Wright, who posted a 0.71 goals-against average and a lockdown defensive core that included Addie Paskowski, Alaina Dunn, Catie Putt and Brenna Vitelli, the Spitfires recorded 28 shutouts and allowed two or more goals on only nine occasions.

They began the year with a 30-game unbeaten streak that included a 28-0-2 record, recording 16 shutouts and surrendering more than a single goal just twice during that run.

“Ultimately, what made this team successful was that they truly were a team,” Hulbig said. “They worked so hard, had so much fun and weren’t afraid to push one another.”

The players echoed their coach’s sentiments.

“Our season was amazing,” forward Quinn Taylor said. “We played well together and had a lot of chemistry. It was a special time for me and the other girls. We won a lot of great tournaments. I hope I have that feeling again in my hockey career.”

Added Wright: “Our team was so successful because we never stopped working hard and went through every practice, game and tournament as a team with an extremely strong bond both on and off the ice.”

Forward Madison Funk felt the bond as well: “We trusted and communicated with each other all season long, and that’s why I think we succeeded.”

Perhaps most impressive, however, is that despite the amount of hard work, sacrifice and discipline that goes into such a successful season, the word “fun” seems to be a common thread among the players and coaches on a team that had many heroes, but no “superstars.”

“This season was by far the best season ever,” Dunn said. “I had so much fun with my teammates, who are like my sisters.”

It truly was a fairytale ending for a team that had come up just short of its goals several times in the past despite a great run of success over the previous five years.

“We worked all season to accomplish our No. 1 goal,” forward Molly Cataldo said. “All those games, practices and camps, being at the rink an hour early every day and working our absolute best every time we stepped on the ice really paid off. We became the best team on one of the best days of my life.”

No doubt there will be many more days of glory ahead for the members of this hard-working group, but no one can ever take this year’s memories away from the Spitfire players and coaches.

Congratulations to the Massachusetts Spitfires on a truly memorable season. The entire roster is below.