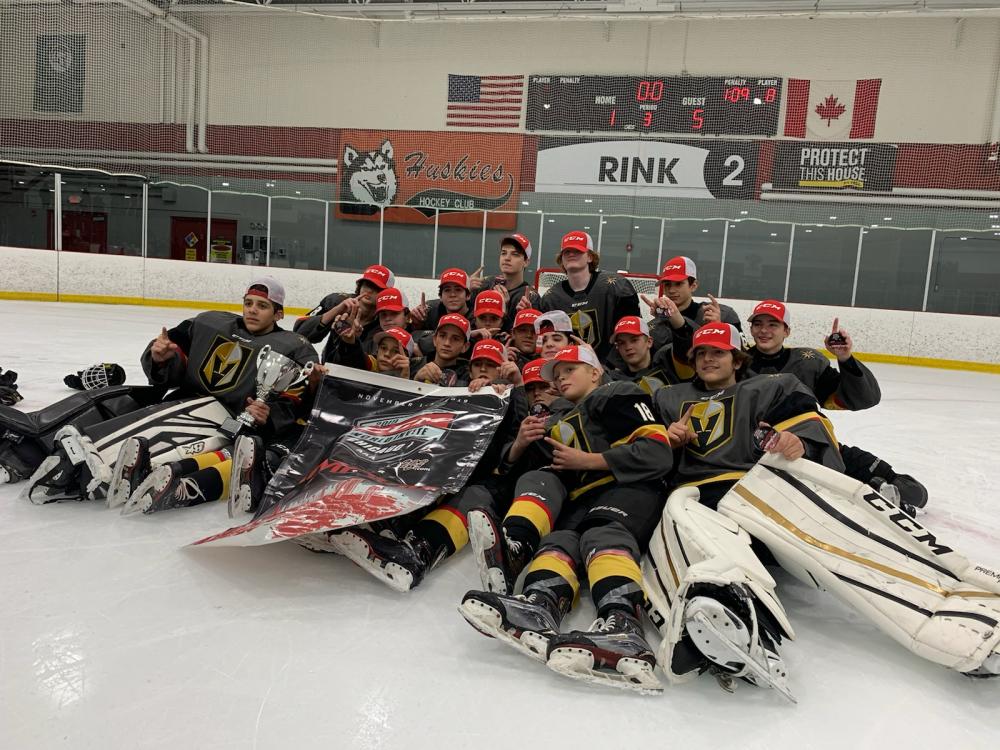 All Great Things Must Come to an End: A Tribute to the 2005 Kensington Valley Warriors

Some athletes play a sport for a good portion of their lives – even those who make it to the professional ranks – and might only win one or two championships of any kind along the way.

Truly a team on a mission, the Warriors played in five tournaments during the 2019-20 campaign and won them all. They had two more tourneys in their sights – the Michigan State Tier 2 tournament and potentially USA Hockey Nationals – when the toughest opponent of all, COVID-19, shut down their season in mid-March.

The team finished the year 40-5-6 and ranked fourth nationally, according to MyHockeyRankings.com. Just prior to the shutdown, Kensington Valley had avenged two earlier losses to the second-ranked Flint Jr. Firebirds by knocking them off on the way to the Little Caesar’s Amateur Hockey League (LCAHL) playoff championship.

While their record and ranking proved that the Warriors were a strong team, they also appeared to be a team of destiny as evidenced by their miracle come-from-behind overtime victory against No. 15 Little Caesar’s in the District 4 semifinals.

No championship team ever has earned its status without having at least a little bit of good fortune on its side, but Kensington Valley followed up that thrilling 7-6 OT win against Little Caesar’s with what coach Jay Storm called “our best game of the year” the next day in a 6-1 victory against Orchard Lake to capture the district championship and earn the state tournament berth.

Against Little Caesar’s, the Warriors rallied three times from two-goal deficits to force overtime with the goalie pulled in the final minute before winning in the extra session. They trailed by scores of 2-0, 4-2 and 6-4 in that game before the miraculous ending.

Kensington Valley scored to make it 6-5 with about four minutes remaining in regulation and pulled the goalie for an extra attacker in the final minute. The puck was thrown toward the net and leading-scorer Reid Daavettila managed to score and tie game at 6.

The OT game-winner was created by a strong forecheck from Nick Halonen. Halonen, who played most of the season with a broken wrist, forced a turnover that Daavettila corralled and fed to Brendan Pietila for the win.

After capturing the district championship, the Warriors recorded victories over second-ranked Flint and No. 21 St. Claire Shores to win the LCAHL championship and would have been the highest-ranked team at the state tournament. A Michigan Tier 2 championship and trip to USA Hockey Nationals certainly appeared within reach.

“Our team was playing phenomenal hockey and was primed for the state tournament,” Storm said. “We were ready to go, and two days before it started we got the news. It was obviously tough for us and everyone else. Devastating. Everyone worked hard and sacrificed a lot to get there, and to have the rug pulled was tough. We told the boys that sometimes life throws you a curveball, and this was a wicked bender. They learned quickly that although disappointing, there are more important things in life than hockey. It was a great season with many life lessons, and it was the most enjoyable group of kids I have ever coached.”

The previous year, Storm coached the Howell Warriors to a 25-26 record, but heading into this season several players who had played together for a 57-1 Livingston Lightning Squirt AA team a few years ago before scattering decided to get back together and play for his Kensington Valley team.

It took a complete team effort from players and families for the Warriors to enjoy so much success. One of the team’s moms, Myra Halonen, coordinated the off-ice training program.

“She did a phenomenal job,” Storm said. “The boys respected her and bought into her program. We won a lot of games in the third period, because we were in phenomenal shape.”

Other coaches came in each week and also contributed to the Warriors’ success.

“We had a great skills coach named Ivan Gadayenko, who came in every Monday and worked on skating and stickhandling with the team,” Storm said. “He pushed them out of their comfort zone. Every kid improved a tremendous amount. We also had Trent Daavettila come out and work with the boys twice a week. Trent was phenomenal in every aspect. He thinks the game differently than most. The things he taught the boys – and the things I learned – were amazing. I would say the biggest benefit Trent brought was improving hockey sense. I saw with my own eyes that hockey sense could be taught. The boys really grasped the concepts that were taught, and it was fun.”

Although Storm said the team was peaking at the right time, Kensington Valley was strong right out of the gate. The Warriors opened the season with a 26-game unbeaten streak, going 22-0-4 and winning 13 straight contests leading up to their first loss of the year, a 1-0 setback against Flint Nov. 10.

They went 8-2-4 to finish second to Flint with 20 points during the LCAHL regular season and captured championships at the Legacy Tournament in Grand Rapids, Mich.; the Motown Classic in Detroit and the CCM Invitational in Chicago to go along with the LCAHL playoff and District 4 titles.

Kensington Valley outscored its opponents, 208-81, on the season and held its foes to one goal or fewer 31 times while also recording 11 shutouts. One of those shutouts was a 2-0 victory over the AAA Rocky Mountain Roughriders, and the Warriors posted a three-game shutout streak Nov. 2-3.

Storm credited his teams’ puck-possession style, which he estimated allowed the Warriors to control the puck 75 percent of the time in some games, and fierce forecheck, which allowed them to regain possession after losing it, for the Warriors’ success.

“We had great players and great leaders along with lights-out goaltending,” he said. “We had mental toughness and grit.”

Kensington Valley used that style to post a 5-0-2 record against AAA opponents.

“The reason our team was so successful this year is we had a bunch of great families with great kids who bought into the team-first mentality,” Storm said. “It was always about the team. We had great players – a lot of them – and to win like we did this year, you need your best players to be your best players game in and game out. But you also need different kids to step up at different times, and we had that consistently throughout the year. The parents and other coaches involved were first-class. The only thing that stopped these boys was corona.”

Unfortunately, coronavirus brought a lot of memorable seasons to an abrupt end, but it can’t take away the Warriors’ achievements or the lifetime memories they created during their remarkable 2019-20 journey.