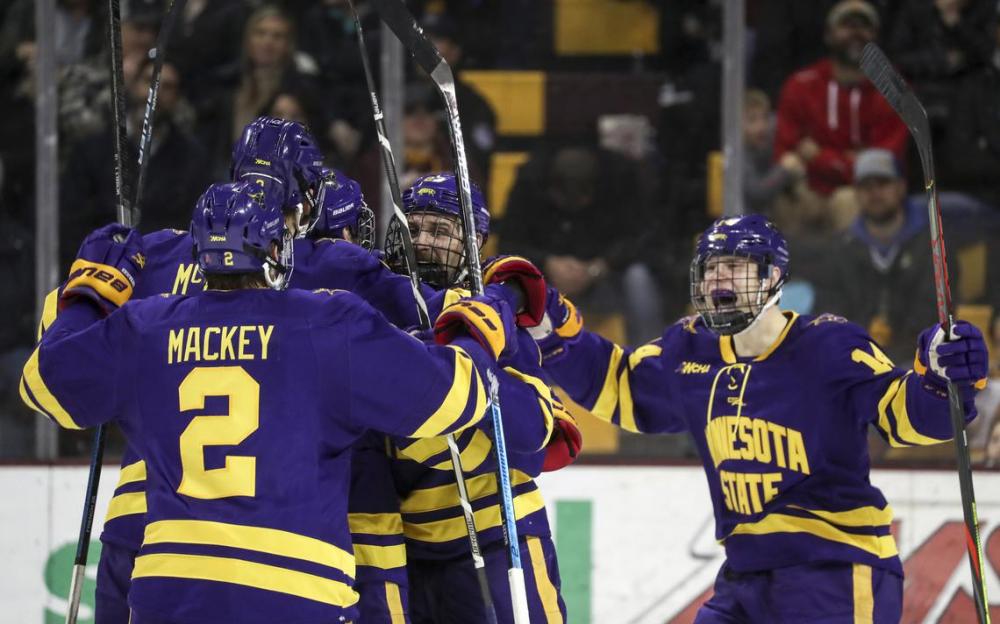 The first time proved to be the charm for the Minnesota State men’s hockey team.

After twice suffering crushing first-round upset defeats as a region’s top seed under head coach Mike Hastings, the Mavericks made the most of the program’s first appearance in the Frozen Four, capping their trip to Detroit with a 4-2 victory over perennial national-power Boston College to win the 2020 NCAA Division I men’s hockey championship Monday at Little Caesar’s Arena.

Senior Marc Michaelis didn’t win the Hobey Baker Award, but he walked away with the two trophies that mean the most Monday night, adding a goal and an assist to his nine postseason points to capture the Most Oustanding Player Award to go along with the national-championship hardware.

His power-play goal late in the second period broke a 2-all tie, and his clear in the waning seconds led to classmate Parker Tuomie’s title-clinching empty-net goal as Minnesota State concluded a remarkable season with a 35-5-2 record.

The Mavericks were one of the top offensive and defensive teams in the nation thanks to a deep group of forwards that had four players record 30-plus points and one of the nation’s top goalies in sophomore Dryden McKay. Boston College also entered the finals as one of the top-scoring teams in the country, averaging more than four goals per game.

Something had to give, and the offense-defense one-two punch of Minnesota State was just a little too much for the Eagles, who were making their 26th Frozen Four appearance, to handle.

“That is a very complete hockey team,” Boston College head coach Jerry York said. “For them to come here for the first time and take care of business the way they did is a tribute to coach Hastings and the seniors in their locker room. I was impressed with their play all year, but especially in the last three games of this tournament. They looked like a team that would not be denied.”

The tournament didn’t get off to a great start for the Mavericks as they fell behind by two goals to another No. 4 seed in Arizona State during their first-round game before reeling off 10 of the next 12 goals over five periods to advance to their first national semifinal. If you take away the first period of that opening game, MSU outscored its opponents, 17-6, the rest of the way en route to its first Division I national title.

“There wasn’t a need for any temper tantrums or emotional locker-room speeches with this group,” Hastings said. “I’ve mentioned it after every game in this tournament; the guys on the bench kept me calm. They came into this tournament determined to prove to the college hockey world that we belong in the conversation as one of the top programs in the country. There’s more than winning national championships that goes into that for me, but for the players on this team, they were very driven to show everyone that we belonged. They were self-motivated and business-like in their approach. It was very impressive to watch from the inside.”

Michaelis was the offensive ignitor throughout the season and the tournament, and it turned out that way again Monday, but it did not come easy for him. The Eagles took away time and space from Michaelis and his linemates all over the ice all night, using a combination of their third and fourth lines in hopes that their top six might come through and provide enough offense for them to skate away with another national title.

Their strategy was working just fine as the teams skated to a 2-2 deadlock through 37 minutes, but a hooking penalty to BC’s Luke McInnis with 2:18 left in the period would change all that.

It took just 22 seconds for Michaelis to convert Charlie Gerard’s feed from below the goal line to the high slot. He beat Eagle netminder Spencer Knight high to the glove side with a quick-release wrist shot before the BC defenders could react.

“They made it really tough on us all night,” Michaelis said. “They were physical and relentless and made us work for every inch of ice we got. We kind of had a feeling that it would be a dirty goal that would be the difference unless we could get one on the power play. We were fortunate to get that opportunity and then to convert.”

Michaelis’ postseason scoring spree of six goals and five assists allowed him to take over the national lead in overall points with 55, ahead of North Dakota’s Jordan Kawaguchi, who recorded seven points in the tournament to finish tied with Providence’s Jack Dugan at 52.

“Do you guys really want me to say that stars have to play like stars to win national championships again?” Hastings asked. “Marc is our guy in terms of leadership and production. All of the accolades are deserved. I couldn’t be happier for him.”

McKay was the Mavericks’ other big-name star, and he was up to the challenge again, turning aside 27 or 29 BC shots to earn the victory and a spot alongside Michaelis and Gerard on the all-tournament team

“Our defense makes it pretty easy for me to look good out there on a nightly basis,” McKay said.

Those three were joined by Kawaguchi as well as BC defensemen Ben Finkelstein and Jesper Mattila on the all-tourney squad.

The other Mattila, Julius, got the Eagles on the board first 12:14 into the game, but Reggie Lutz countered for MSU 3:01 later, and the game was tied at 1 after the opening 20 minutes. Defenseman Ian Scheid bounced one off BC defender and past Knight for a 2-1 Maverick lead at 5:57 of the second frame, with rookie sensation Alex Newhook answering for BC at 14:05 to knot the game at 2.

That’s where things would stay until Michaelis buried the game-winner. The third period was a little more wide open as the Eagles moved away from their shut-down scheme and threw everything they could at McKay, but the sophomore would not blink.

Finally, with about 20 seconds remaining, Michaelis bolted for a loose puck on the boards and lofted a clear down the ice. Tuomie outraced the Eagle defenders for the puck and tucked home the clincher with 12 seconds left, starting a Purple Reign for the boys from Mankato.

“It’s always an honor to compete against a coach like Jerry and one of hockey’s historic programs in this kind of setting,” Hastings said. “What those guys over there have built in Boston is what we are trying to build for our program. This is just the first step in that direction, but it’s a huge day for Minnesota State University. I think knowledgeable hockey people know the type of program we have, but this should once and for all validate all the hard work that has gone into this.”