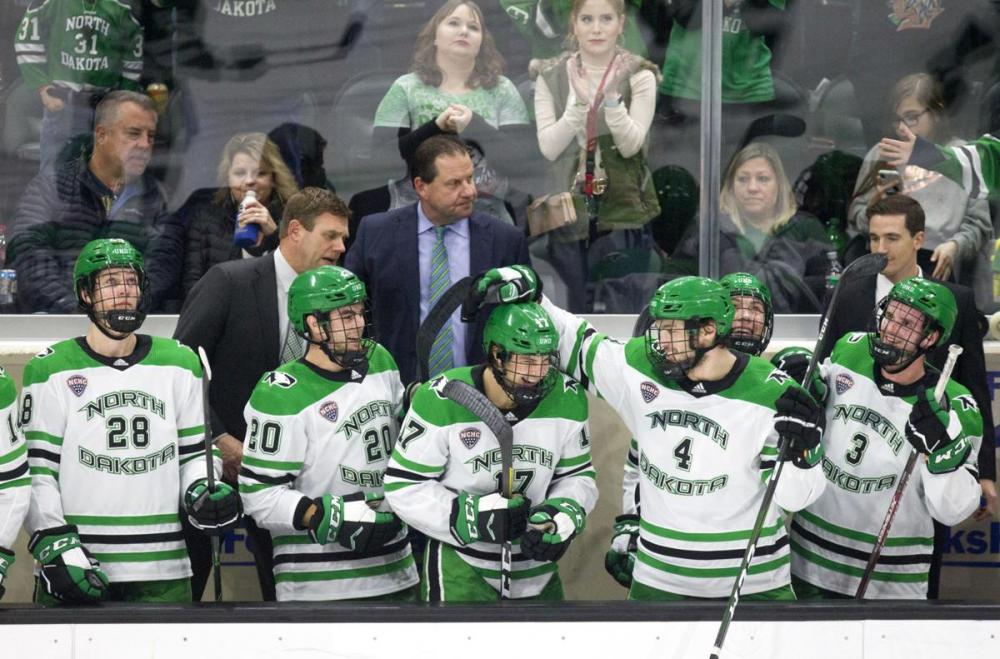 Another Hobey Baker finalist who came up short made one final argument on his own behalf Thursday in the NCAA Men’s Division I Hockey Championship Pennsylvania Regional final.

Junior Jordan Kawaguchi set up each of his linemates once and potted two goals of his own as top-seeded North Dakota knocked second-seeded Penn State out of the tournament, 6-3, in front of a pro-Nittany Lion crowd at PPL Center in Allentown, Pa.

“That’s just Jordan,” Fighting Hawks head coach Brad Berry said. “You don’t want to ever appear like you take a player for granted – especially a player who has done so much and given so much to your program – but I think we just expect him to give us that type of effort almost every night. I don’t think it had anything to do with the award. He’s a self-motivated kid who is always prepared and ready to go. He’s just a great player.”

With the victory, the tournament’s top overall seed improves to 28-5-4 and earns the fourth and final spot in the MHR Frozen Four Simulation, joining Boston College, Minnesota State and Cornell.

The national-championship game will be played Monday, April 20, at Little Caesar’s Arena.

While some are surprised to see BC back in the Frozen Four, college hockey TV-analyst Dave Starman told MYHockeyRankings.com readers to watch out for the Eagles way back in October.

“It’s very unique to say that BC is under the radar,” he said, “but I expect them to have a rebound season. With the personnel they brought in and the players coming back, they should have a nice, solid team. They may not be as strong as some of the great BC teams of the past, but they should be a really good fundamental team.”

This year’s Frozen Four contingent continues the recent trend of smaller, hockey-crazed schools that are not from Power Five conferences taking over the Division I hockey landscape. The Eagles will be looking to reverse that trend by bringing the hardware back to Chestnut Hill for the first time since 2012.

“There’s a real divide between the young guns at the brand-name schools and the more veteran teams on the other side, which over the past few years is where the success has been,” Starman said before the season. “It’s really amazing the pasting the bluebloods have taken over the last three years. There really are two different schools of thought. You have the brand names bringing in the very best players who are not likely to stay for four years. They compile very high-skilled teams with players who are going to play in the NHL and are itching to get there, so they arrive with one foot in and one foot out. I think those teams struggle to build the cohesive culture {some of the smaller schools} do.”

Starman’s words have proven prophetic as brand-name Boston College, the lowest-remaining seed, looks to win one for the bluebloods. An experienced and talented North Dakota team, a hungry and high-powered Minnesota State team and the under-appreciated sentimental favorites from Cornell are looking to keep the trophy Minnesota Duluth has held the past two years out of Goliath’s grasp.

After watching North Dakota dismantle Penn State in an up-tempo, high-flying affair, it would be tough to bet against the Fighting Hawks.

Kawaguchi, who entered the postseason as the nation’s second-leading scorer, continued his push to pass Providence’s Jack Dugan. Dugan concluded the regular season with a seven-point advantage over the North Dakota junior after compiling 10 goals and 42 assists. In two NCAA Tournament games, Kawaguchi has totaled two goals and four assists to bring his season totals to 17-34-51.

“For me it was a great honor to be named a finalist for the Hobey Baker Award with such great players,” Kawaguchi said. “Sure, having the most points in Division I would be nice, but for me as a captain to be able to help lead this great group of guys to the Frozen Four is such an incredible feeling. Without those guys there’s no way I would be able to do what I do, so the team goal is what matters most to me.”

Kawaguchi set up Grant Mismash 6:13 into the contest before netting a goal of his own 3:12 later, and just like that it was 2-0 Fighting Hawks. Kawaguchi’s feed also led to a primary assist on the third North Dakota goal, at 3:46, of the second period as Collin Adams converted.

A Shane Pinto-to-Westin Michaud marker made it 4-0 Fighting Hawks after 40 minutes and led to a change in goal for the Nittany Lions to start the final frame as sophomore Oskar Autio replaced senior Peyton Jones. Jones allowed the four goals on 21 North Dakota shots.

“We ran into a buzz saw tonight,” Nittany Lion head coach Guy Gadowski said. “There are a couple schools of thought when you make a goalie change, and then some other things entered into my decision as well. Being down four goals had nothing to do with Peyton. I looked at it like maybe it would light a fire under the team, and at the same time it would give a younger player some great experience. If we rally and win it, that’s great, and Peyton is back in goal next time out. But if we don’t and the game gets ugly, that’s not how I want a great senior to have to go out.”

The move appeared to work as Alex Limoges and Liam Folkes tallied twice, finally figuring out North Dakota netminder Adam Scheel, in the opening 5:11 of the final period. But Kawaguchi rose to the occasion once again with an unassisted goal after causing a neutral-zone turnover with 10:36 remaining to make it 5-2.

Jasper Weatherby would extend the margin to four just 1:15 later, and Penn State managed to sneak one more past Scheel on Denis Smirnov’s rebound goal in the final minute to forge the final 6-3 margin.

The Nittany Lions’ third-period charge brought the final shots-on-goal tally to 31-27 in favor of the Fighting Hawks, combining with the three Penn State third-period goals to make the game appear closer than it was.

“I caught a little bit of that Minnesota State game the other night,” Gadowski said, “and I don’t know that you could have two teams playing any better than them and North Dakota heading into the semifinals. And then you have Boston College, which really seems to have figured things out the last few weeks. It’s going to be a great Frozen Four. I just wish we could have had a little better showing tonight. Hopefully next year we can take that next step as a program.”

Penn State finishes the year 21-11-4 after advancing to a regional final for the second time in program history.