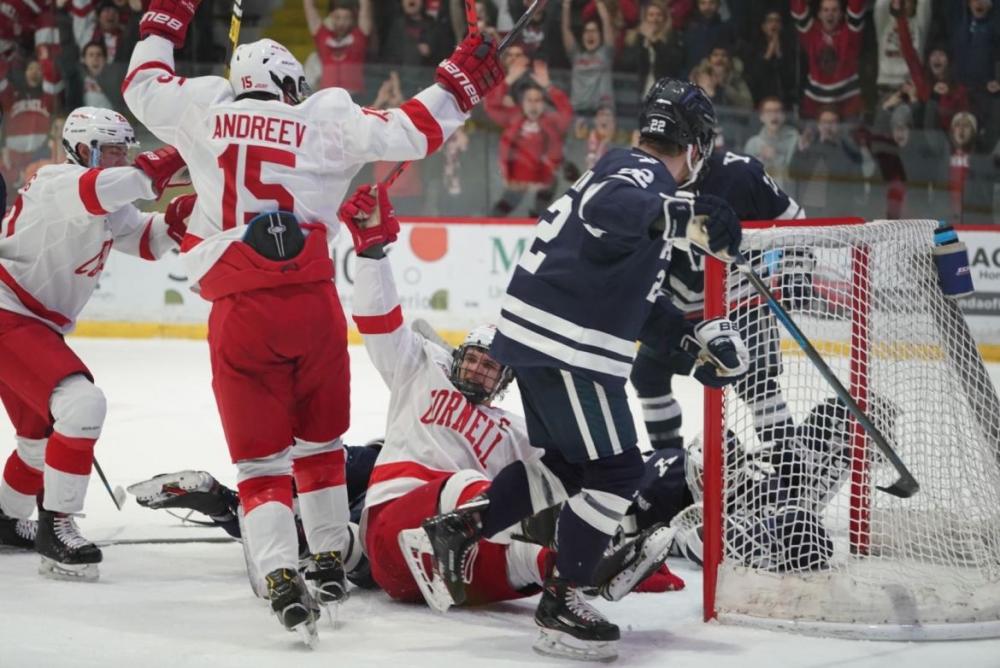 Cornell University goalie Matthew Galajda didn’t win the Richter Award Saturday, but his team is going to the Frozen Four.

And he played a huge part in getting them there.

The senior from Aurora, Ontario, who was a finalist for the award given to the nation’s most outstanding goaltender, stopped all 27 shots Ohio State sent his way Monday to record the first shutout of the 2020 NCAA Division I Men’s Hockey Championship and lead the top-seeded Big Red to a 2-0 victory over third-seeded Ohio State in the New York Regional final at the Times Union Center in Albany, N.Y.

“The award went to a great goalie; all the finalists are great goalies,” Galajda said, referring to the University of Maine’s Jeremy Swayman. “While it would have been great to win it, I wouldn’t trade it for the opportunity to experience the Frozen Four with my teammates. This is what we’ve worked for all year, some of us for four years.”

Galajda steadied the ship and helped his team weather the storm – pick any sports clichés you want to describe his effort – until the Big Red finally broke through on the other end of the ice against Ohio State’s Tommy Nappier 6:20 into the third period.

For the most part the game was evenly played, with each team dominating puck possession, shots on goal and offensive zone time for stretches. In many ways the contest resembled an old-school heavyweight fight complete with momentum swings and strategic counterpunches.

In the end, though, the senior netminder outlasted the junior to take the decision.

Equally spectacular in protecting his team’s cage, Nappier would only allow the one goal while stopping 29 Big Red shots. His five saves early in the game, with Cornell swarming in front a raucous partisan crowd, allowed his mates to settle down and control the final 10 minutes of the opening frame once Cornell’s legs tired a bit.

Nappier couldn’t do anything about the final goal, though, watching helplessly as Big Red freshman Travis Mitchell launched a 180-foot lob clear that somehow trickled over the goal line and into the empty Buckeye net, sealing Cornell’s first trip to the Frozen Four since 2003 and setting off absolute pandemonium in the red-drenched Times Union Center.

“{Galajda} never really talked about the award, and he didn’t say much after he found out on Saturday,” Cornell head coach Mike Schaefer said. “You could tell he was really locked in on what he needed to do tonight. I felt very strongly he would give us a tremendous effort here, but you never think you’re going to pitch a shutout against a quality opponent like Ohio State.”

Sophomore Max Andreev made sure that Galajda’s effort would hold up, converting a 2-on-1 with freshman Jack Malone with 13:40 remaining in regulation for the only goal Cornell would need. Andreev saucered a soft feed to Malone for what appeared to be a one-timer into a virtually empty net, but somehow Nappier scrambled across to get a piece of the puck and leave it fluttering in the crease where Andreev managed to poke it in just before slamming into the net.

The Times Union Center crowd held its breath, not sure if Andreev was hurt or whether the goal would stand, finally erupting as the sophomore got back to his feet at about the same time that the goal was signaled by the referee. Although it was just Andreev’s sixth goal of the year, it was his fourth game-winner, and it couldn’t have come at a better time.

“We can’t ask Tommy to make both of those saves,” Buckeyes head coach Steve Rohlik said. “I mean the first save was spectacular. At that point someone has to box their forward out. He just wanted it a little more and beat us to the puck by a split second. It’s a game of inches, but we’ve got to help our goalie out when he makes a save like that. He was phenomenal all night. Both guys were. Tommy deserved better.”

Andreev said he didn’t expect to be one of the guys invited to the postgame press conference and laughed when one of the reporters asked him if he was the team’s Mr. Clutch.

“I’d like to score a few more goals to be honest with you,” he said, chuckling. “But at least the ones I have scored have been pretty meaningful and have helped us win games. That’s the most important thing. I never expected to be the guy to score the winner tonight. I think for all of us the main focus was doing our job in all three zones and limiting their chances. We figured if we played it that way, Matty would take care of the rest and we’d figure out a way to put a couple in the net.”

“We really came out flying with such a great crowd behind us like that,” he said. “Nappier was phenomenal early. I thought if we could get one right off the bat and execute our game plan, with the goalie we have, we would be very tough to beat. We used up a ton of energy those first seven or eight minutes and lost our legs a bit for the rest of the period. That’s when Matt really made the difference. They pushed back, and he was a brick wall.”

The Big Red netminder really did steady the ship and help his team weather the storm. If you can think of a better way to say it, feel free, but the only thing Cornell fans need to hear is that they are heading to the Frozen Four in Detroit for the first time in 17 years.

The Big Red improved to 25-2-4 with the victory and will take on another top seed – and the tournament’s second seed overall – when they face Minnesota State April 17 at Little Caesar’s Arena. OSU concluded its season 21-12-5.

“It’s been a dream season so far,” Schaefer said, “but the goal has never been just to get there. It’s a great accomplishment for us and Cornell University, but there’s still work to be done.”