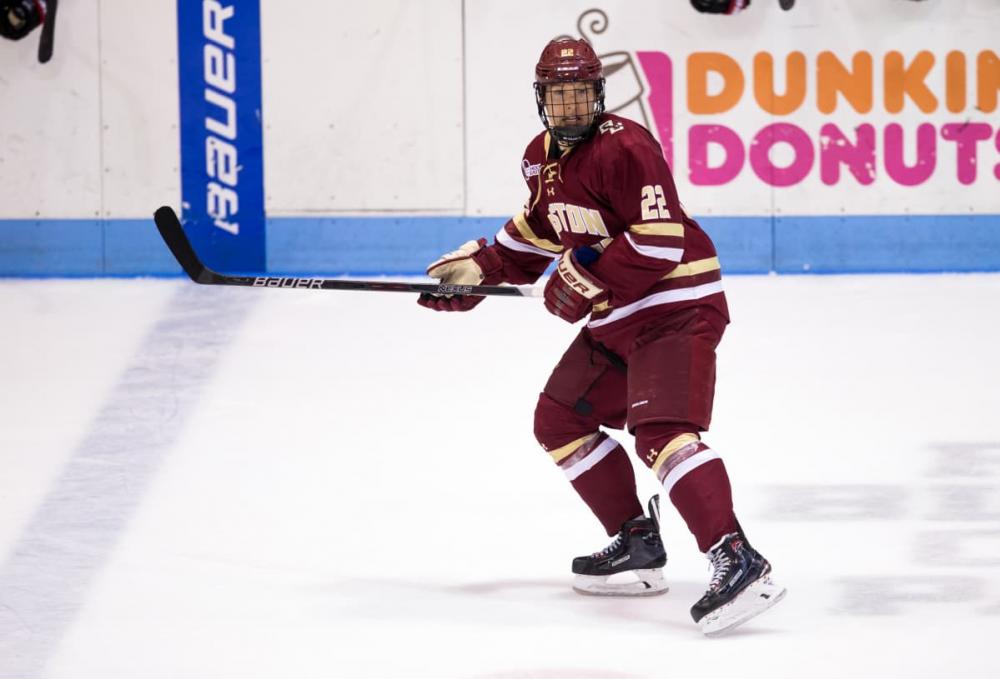 While in some NCAA Division I college sports the postseason can be a story of the “haves” vs. the “have nots,” the men’s hockey tournament in recent years has been a story of the blue bloods coming up short against the little guys.

Thursday, in the Massachusetts Regional final, the blue bloods had their chance for revenge as second-seeded Boston College looked to end top-seeded Minnesota Duluth’s charge toward a third-consecutive national championship.

And the Eagles soared to the occasion.

After nearly blowing the 2-0 lead it built through two periods, Boston College pulled itself off the ropes after two early third-period UMD goals to net two of its own in the final 5:39 and earn a trip to the Frozen Four with a 4-2 victory over the Bulldogs in front of an overwhelmingly pro-B.C. crowd at Worcester’s DCU Center.

Eagle defenseman Ben Finkelstein, the hero of B.C.’s first-round victory against Clarkson, didn’t score the game-winner this time, but he did factor in on the each of the last two goals, picking up primary assists on both.

Finkelstein’s diagonal pass to the right-wing faceoff dot allowed junior forward Aapeli Rasanen to one-time home the power-play game-winner, his sixth extra-man tally of the year, with 5:39 left, breathing life into the reeling Eagles. Boston College had been outshot, 13-3, to that point in the period and outscored, 2-0, before Bulldog defenseman Nick Wolff was whistled for holding.

“Champions are champions for a reason,” Boston College head coach Jerry York said. “I’ve coached championship teams and understand the character, will and fortitude it takes to get to that level. Even though we got up by two early – and maybe that allowed us to conserve a little bit of energy and push back there at the end – there was no doubt that team was going to battle until the bitter end. They had us on our heels. We were lucky to get a power play.”

It took a 1:24 with the extra man – and four shots on goal – before the Eagles could beat UMD goalie Hunter Shepard, who would finish with 25 saves. Boston College freshman Spencer Knight stopped 29 shots to earn the victory.

After Knight and the Eagles withstood one final late rally from the Bulldogs, freshman scoring-leader Alex Newhook finished off UMD by tapping home an empty-net goal after Finkelstein’s clear with 12 seconds remaining.

“It takes so much effort and dedication and hard work – and yes, some luck – to win back-to-back national championships,” Minnesota Duluth head coach Scott Sandelin said. “Am I disappointed? Of course I am. I’m a competitor just like all these kids are competitors. The goal is to be the better team every single time you step on the ice. Am I sad? Not in the least. It’s been an incredible run with an incredible group of kids. It’s been an honor to coach every one of them, and I couldn’t be more proud.”

Three of the Sandelin’s seasoned veterans, as you might expect, led the charge in the third period with the Bulldogs staring at a two-goal deficit.

Sophomore Jackson Cates, one of the goal-scorers in UMD’s 3-0 championship-game win against UMass a year ago, came out flying off the opening faceoff. He threw a big hit while at the same time deflecting an attempted D-to-D pass then walked in alone and beat Knight with a low, hard snap shot to the stick side just eight seconds into the final frame.

“My goal was to go out and hit anything that moved to get the boys going for the final period,” Cates said. “I really wasn’t even thinking about scoring.”

Cates’ energy and goal certainly lit a fire under his teammates as the Bulldogs recorded the first nine shots of the period, with the ninth also proving to be a charm.

Hobey Baker-finalist Scott Perunovich’s point blast rattled around like a pinball before finally hitting Cole Koepke’s leg and caroming past Knight just 1:19 after Cates’ goal to even the game at 2. It was Koepke’s second goal – and Perunvoich’s fourth point – of the tournament.

B.C. ended the shots-on-goal drought on the next shift, but Minnesota Duluth continued to surge, outshooting the Eagles 4-1 over the next five minutes before B.C. seemed to catch a second win.

“There’s no doubt we took their best punch,” York said. “To say I was concerned would be an understatement, but we finally settled down and started getting pucks deep. Our puck possession improved considerably and we kept our feet moving, which ultimately resulted in the power play that won it for us.”

David Cotton opened the scoring for Boston College at 11:14 of the first period, banging a rebound of a Julius Mattila shot past Shepard for his second of the tourney and 17th of the year. It was nearly a full period later, at 10:57 of the second period, that Logan Hutsko made it 2-0 with his 20th goal of the season.

“I felt like we played a near-perfect game for the first two periods,” Knight said. “Guys were making it easy on me, letting me see shots, clearing rebounds, boxing guys out. I knew there was no way it was going to be that easy in the third.

Boston College improves to 26-8-2 with the victory and moves on to an April 17 matchup in the national semifinals at Detroit’s Little Caesar’s Arena with the winner of the Pennsylvania Regional Final between No. 1-seed North Dakota and second-seeded Penn State.

“This group will be remembered and held up as the standard to which our program aspires for a long, long time,” Sandelin said. “And they’ve earned it.”