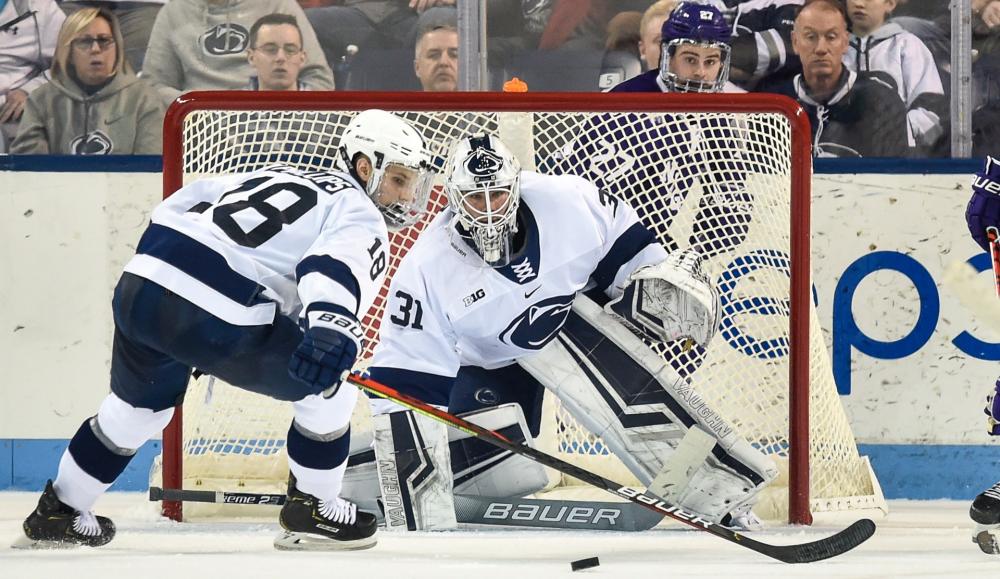 In college hockey a team often is willing to take its lumps in November in hopes that it pays off in March. That’s exactly how Tuesday’s final 2020 NCAA Men’s Division I Hockey Championship first-round game played out at PPL Center in Allentown, Pa.

Penn State, a veteran team with 19 juniors and seniors that entered the postseason hoping to make a little history as the No. 2 seed in the Pennsylvania Region, avenged an early season overtime loss to third-seeded UMass Lowell with a hard-fought 4-3 victory.

It was one of those veterans, junior Evan Barratt, who buried what turned out to be his fifth game-winning goal of the year three minutes, 17 seconds into the third period to send the Nittany Lions to the April 15 regional final against top-seeded North Dakota at PPL Center.

Barratt converted a perfectly placed, soft 2-on-1 feed from senior playmaker Nate Sucese, flicking a quick shot off the crossbar and down behind the goal line and River Hawks goalie Tyler Wall for a 4-2 Penn State lead.

The Nittany Lions were outshot, 12-2, over the final 16-plus minutes – and surrendered a goal to sophomore Sam Knoblach that cut the margin to one with 6:19 remaining – but managed to survive and advance thanks to some timely saves by, you guessed it, another senior.

Peyton Jones stopped 11 of those final 12 shots, including three in a final-minute flurry, to finish with 25 saves and lead his team to just its second regional-final appearance.

“There really are no secrets as far as my job goes,” Jones said. “I try to make enough saves to keep us in the game. That’s the approach every night, but when a team is putting on the pressure like they were in the third period, it becomes a real team effort. I made some difficult saves, but our guys were getting in shooting lanes and selling out all over the place to help me out. That’s what good teams do.”

It’s also what veteran teams looking to make a deep postseason run do.

“We missed the tournament last year and didn’t have a great showing the last time we were here against Denver,” Penn State head coach Guy Gadowsky said. “A lot of guys who were part of that team realized that you don’t get many opportunities at something like this. This could be the last time around for many of them. Having so many veterans in the lineup tonight really paid off. You could feel the desperation and desire to do whatever it took to win on our bench. It was a complete team effort.”

It was a team effort that allowed the Nittany Lions to appear in control for much of the game. They cruised to a 2-0 lead in the game’s first 30 minutes, but somehow led just 3-2 after the second period despite running up a 31-15 shots advantage.

“It really took us until the third period to find our game,” River Hawks’ head coach Norm Bazin said. “But I give our guys credit. For a young group they really hung in there and weathered the storm. We managed to scratch our way to a couple of goals to stay within striking distance and gave it everything we had right up to the final horn. Tyler was great in goal and gave us a chance to win, but Jones came up big for them at the end.”

UMass Lowell’s youth might have played a role in the slow start.

The River Hawks appeared to be tight early, struggling to get pucks out of their own end and to connect on passes in the neutral zone. The team’s top-three scorers this season, all freshmen, entered the game with just four points combined in their previous four outings.

Larger-than-life freshman Andre Lee and junior Connor Sodergren would turn that narrative around, however, by teaming up on a goal at 10:04 of the second period, but UMass Lowell had fallen behind, 2-0, at that point. Lee swatted home Berglund’s centering pass for his ninth goal of the season. It also was Sodergren’s ninth assist and his fourth helper in the last eight games.

Lee’s classmate and team scoring-leader Carl Berglund would keep the rookie roll going by scoring 1:29 later, redirecting what appeared to be a pass from defenseman Seth Barton while standing right next to the far post for his 13th tally of the year to give Barton five points in his last six outings and tie the game at 2.

The intensity and physicality picked up over the next seven minutes, with each team taking a penalty, but it was UMass Lowell’s infraction – Sodergren was whistled for high sticking with 2:01 left in the period – that would prove to be a back breaker.

Penn State took advantage with Sodegren watching from the penalty box, possessing the puck for more than 90 seconds before junior defenseman Cole Hults blasted Sucese’s pass from the corner past the screened Wall from between the tops of the faceoff circles to give the Nittany Lions a 3-2 lead heading into the locker room.

“We’ve heard it a million times,” Bazin said. “Don’t give one up in the first or last minute of a period. We finally had calmed ourselves down and were starting to make them sweat a little bit and then shot ourselves in the foot.”

Barratt would make that late second-period goal sting a little more by connecting on the game-winner at 3:17 of the third. Penn State’s other goals were scored by junior Alex Limoges and senior Brandon Biro, with Hults picking up an assist on Biro’s tally to finish with two points.

“I’m excited to coach these guys over the next few years,” Bazin said. “We came here with 20 freshmen and sophomores on our roster and took a very good veteran team down to the wire. I wish next season could start tomorrow. The future is bright."