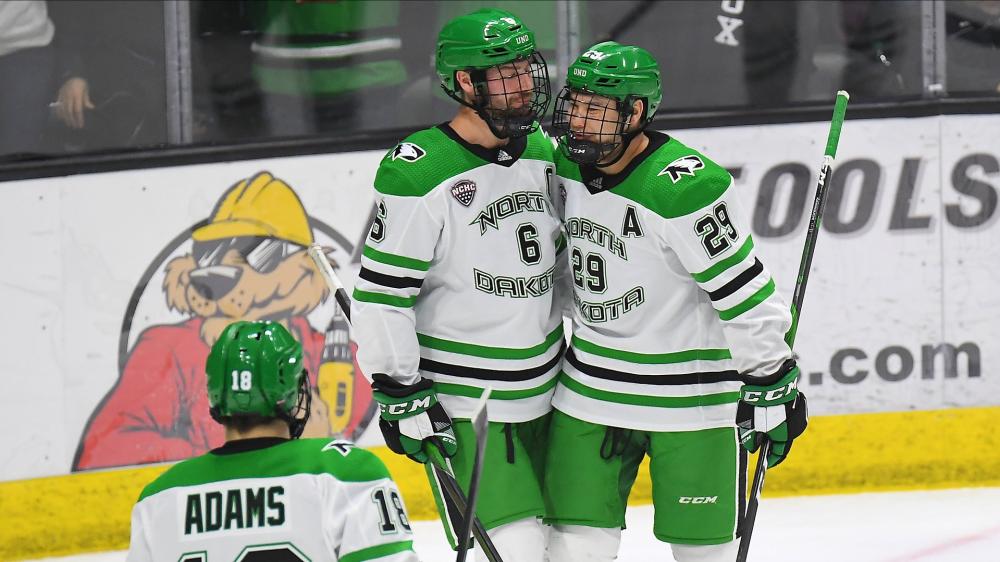 The North Dakota men’s hockey team entered Sunday’s opening-round of the NCAA Division I Championship determined to go to any lengths to keep its remarkable turnaround season going – even if it meant sending last year’s Cinderella packing.

It wasn’t pretty or flashy, but in a game that featured very little operating room for either side, the top-seeded Fighting Hawks got a go-ahead goal from their Mr. Clutch, junior Collin Adams, midway through the second period and then clamped down on No. 4-seed American International the rest of the way en route to a workmanlike 3-1 victory at the PPL Center in Allentown, Pa.

The victory sends 27-5-4 North Dakota to the Pennsylvania Regional final, where the Fighting Hawks will take on the winner of Tuesday’s game between second-seeded Penn State and third-seeded UMass Lowell in Allentown April 13. North Dakota coach Brad Berry, the National Collegiate Hockey Conference Coach of the Year and a finalist for national coach of the year, has led his team to nine more victories than it recorded all last season.

“Both teams played that one pretty close to the vest,” Berry said. “It’s kind of what you expect when you have the nation’s fourth- and fifth-ranked teams defensively playing in an elimination game. There may have been some jitters on our part knowing what AIC accomplished last year and not wanting to suffer that same fate. And I’m sure they didn’t want to let our top offensive guys get it rolling. It really was what you would call a playoff-style game. We did a great job keeping it simple and taking away their time and space all night, but especially after we got the lead in the second period.”

The Fighting Hawks broke a 1-all tie 8:12 into the second period when Adams took a centering pass from Hobey Baker-finalist Jordan Kawaguchi, who had fought off two players behind the net, and rifled it past AIC goalie Zackarias Skog from in-close.

A clutch player all year who has turned in a breakout season, Collins netted what turned out to be his seventh game-winning goal and 16th tally overall. For Kawaguchi, the nation’s second-leading scorer, it was his second helper of the evening and 46th point of the season.

“Those two guys have been doing that for us all year,” Berry said. “I can’t say enough about Jordan’s leadership for us in the locker room and on the ice. You never want to take a player like him for granted, but I’ve just come to expect that type of effort from him when the chips are down.”

Collins’ goal came on North Dakota’s 17th shot of the game, while the Yellow Jackets had taken 15 shots on Figthing Hawks’ netminder Adam Scheel. From that point on, North Dakota would allow AIC only eight more shots on goal – only one of which was a quality chance – over the final 31:48.

One of the top faceoff and possession teams in the nation, the Fighting Hawks controlled the faceoff dots, got pucks deep and frustrated AIC on both the breakout and in the neutral zone. It’s the type of formula that can carry a team a long way in the postseason.

“That’s a great hockey team over there,” Yellow Jackets’ head coach Eric Lang said. “They are well-coached with as much offensive firepower and discipline as any team in the country, and they showed tonight that they really know how to close a game out. We were right in this thing for 59 minutes. Our effort was good. The compete level was high. I think we are a better team than we were a year ago, but the reality is that you’re not going to be able to beat the top team in the nation every single year if that’s who you draw.”

AIC, ranked 20th in the final USCHO poll, concludes its season 21-13-2. Unfortunately for the Yellow Jackets, that record included an 0-7-1 non-conference mark. The program continues to make strides under Lang, but will need to fare better outside of the Atlantic Hockey Association to avoid being a No. 4 seed in the future.

They were able to knock off top-seeded St. Cloud State last year before falling to Denver, 3-0, in the North Dakota Regional final. AIC never led in Sunday’s contest, but the Jackets rallied for a 1-all tie after the first period and held the nation’s fourth-rated offensive team to two goals and 27 shots on goal until Westin Michaud scored into an empty net with 56 seconds remaining.

“We really executed our game plan about as well as we could have,” Lang said. “If you had told me before the game that we would hold them to two goals through 59 minutes, I would have taken my chances on that scenario in a heartbeat.”

North Dakota’s Shane Pinto opened the scoring with his 17th goal of the season 9:06 into the game, taking a feed from Kawaguchi, who was heading off for a change near the red line, and streaking down the right wing to lead a 3-on-2 into the offensive zone. He dropped a pass to defenseman Matt Kiersted, who was trailing the play, and drove hard to the near post. Kirested feathered a saucer pass through the defense right on the stick of the cutting Pinto, who switched to his backhand before lifting the puck into the top of the net for a short-lived 1-0 lead.

The Yellow Jackets came right back on the next shift, with Blake Christensen redirecting Brennan Kapcheck’s point shot to tie it up just 26 seconds later. That’s how the period would end, with the shots at nine apiece and very few scoring opportunities for either side.

“My hat’s off to them,” Lang said. “Sometimes you run into a better team and you give it your best shot and tip your cap if they beat you. We’ve had an incredible couple of years. I couldn’t be happier with where we are as a program right now. We’ll go back to the drawing board next year and try to keep this thing moving forward.”