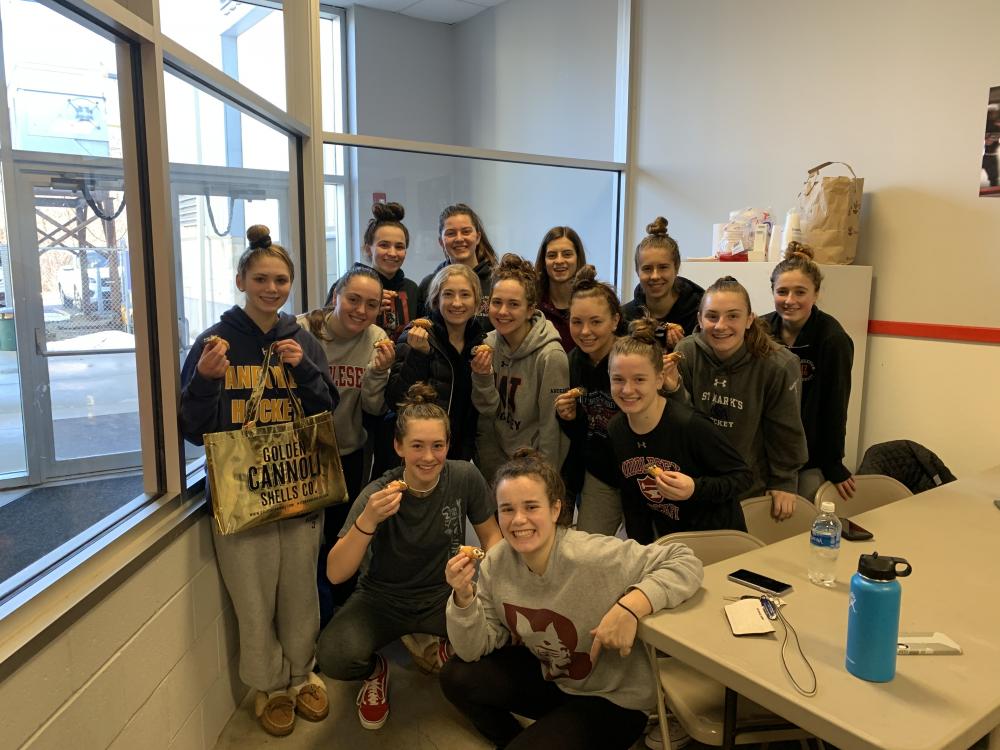 All Great Things Must Come to an End: A Tribute to East Coast Wizards 14 & 16U

Two teams. One organization. One head coach. One mission.

East Coast Wizards 14U Major 1 finished the year as MyHockey Rankings’ top-ranked 14U Tier 1 team, while Wizards 16U Major 2 ended up No. 2 in the Tier 2 rankings.

The 16U group qualified for USA Hockey Nationals in November by sweeping through the Massachusetts State Tournament with a perfect 6-0 record while allowing just four goals, including one in the final three games.

For the 14U group, which had compiled the best record in the New England Girls Hockey League for both the fall and winter seasons, only the state tournament stood between them and a return to Nationals. They were hungry to return after being knocked out by an overtime loss in the quarterfinals a year ago.

The 16U team fine was fine-tuning things and trying to recreate the fall chemistry that served it so well as the Wizards went 10-1-2 in their final 13 games while giving up just seven goals. The 14U team was gearing up to overcome the final obstacles standing between it and a trip to Minnesota. Both teams were focused, eager and excited to continue their journeys toward their ultimate goal.

And then the call came.

As he was leaving the rink that evening, Mark Lissner, the head coach for both teams, got a call from the President of Massachusetts Hockey. Nationals had been cancelled. The state tournament suffered a similar fate the next day.

It took a virus to eliminate two of the nation’s top girls’ hockey teams from national-championship contention.

“We had everyone ready to go,” Lissner said of his 14U team. “We knew it was going to be a tough battle to get through the tournament having to go up against the number-three North Shore Vipers and number-five Boston Junior Eagles. But I knew we were prepared and would put forth a great effort to try to get to Nationals.”

“I was devastated,” 14U team-member Tessa Demain said. “It was hard to imagine that the season was over. It was an unsatisfying feeling that the immense amount of effort we put in throughout the season wouldn’t give us a chance of being national champions.”

“It was like a shot to the heart,” she said. “Knowing that we worked so hard this past season and not being able to prove it made me so sad.”

Fortunately for Lissner, he had a stable of former college players helping out as assistants to share the burden of breaking the news to the teams and comforting the players.

His daughter Emily, who played college hockey at Holy Cross, and Rachel Vigliano, who played at New England College, assisted with the 14U team, while another daughter, Erica (New England College), Katie Davis (Southern Maine) and Kristina Brown (Boston College) helped coach the 16U group.

“The coaches let them all know that as much as they were disappointed to understand how well they performed all year,” Lissner said. “To go through our league as the top team and to be the number-one ranked team in the country every week that the rankings were published is something that the coaches were proud of and the players should be proud of also.”

As for his 16U squad, Lissner added: “They would have been a legitimate contender to go deep in the tournament, and anyone who would have been able to knock them of would have had to play a complete game for three periods.”

The 16U team, playing a schedule that ended with a 1-0 state-title win against the third-ranked Bay State Breakers Dec. 1, was 18-4-2. They finished the season with nine straight victories after a little hiccup in the middle of the schedule.

“This group was great to be around and always knew how to have fun,” Lissner said. “There were a bunch of girls who had not played together much before, and it took us some time to figure it all out, but once we got through a rough patch in October and happened to stumble upon some combinations of players that worked well together, we really started to hit our stride.”

Defense was a strong point for the 16U group as evidenced by the team’s three shutout victories against the third-ranked Breakers, who scored 104 goals in 27 games.

The 14U team was led by five returning players who combined with a talented group of newcomers to form a cohesive unit on and off the ice.

“The returning players made everyone understand that they were important to the group, and we were able to keep everyone moving in the same direction with our sights clearly set on being prepared to play our best when the state tournament came around,” Lissner said.

Because of the Massachusetts high school hockey schedule, Wizards 16U concluded regular-season play in November, while 14U played and practiced only on Sundays for the remainder of its season all the way until March 8. The teams practiced together on Sundays and were very competitive and compatible, according to Lissner.

They even played a highly competitive scrimmage against each other March 1, so the entire journey – the fall success and the March disappointment – was shared by both teams.

“The two teams were very productive working together and competing at a very similar level,” Lissner said.

So it’s no surprise that the players on the 16U team shared in their sister squad’s disappointment.

“I was really disappointed, because our team worked so hard to get to the highest level possible,” Tess Barrett said. “I felt that this was our year to shine and now that has been taken away from us.”

Teammate Daphnee Kalogeropoulos added: “I felt devastated – as if we were denied a great opportunity to prove ourselves on a national level.

Ainsley Moulton of the 14U team said her “heart broke in two,” because “the chance to finish what we started was taken away, “while her teammate Clare O’Connor expressed her disappointment and added some perspective.

“Missing Nationals with teammates and coaches who mean so much to me was so hard because everything we have worked for this season was taken away from us just like that. But today we are thinking most about those whose lives have been hurt most by the pandemic.”

We join Ainsley and all of the East Coast Wizards in thinking of and praying for all those affected by the coronavirus outbreak and congratulate these two great teams on their amazing seasons.

We’re thinking of you guys, too. Be safe and go get ‘em next year!