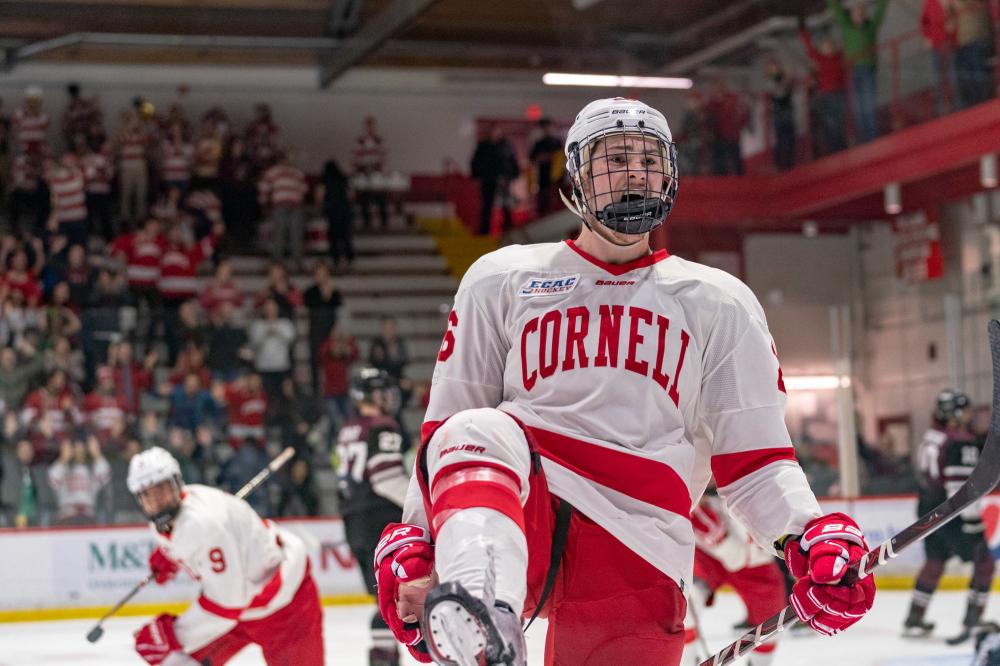 The coaches and those who follow college hockey closely knew, but others were skeptical.

In a game that was considered by many fans to be the most likely to end up in a No. 4 vs. No. 1 upset, the Cornell Big Red lived up to their top ranking in the USCHO Division I men’s hockey poll.

But it wasn’t easy.

Cornell power-play specialist Tristan Mullin rattled his second extra-man goal of the game off the post and behind Western Michigan freshman netminder Brandon Bussi with 37 seconds remaining in regulation Wednesday to lift the top-seeded Big Red past the No. 4-seeded Broncos, 4-3, in a New York Regional semifinal game at a red-drenched Times Union Center in Albany, N.Y.

Mullin, who had tied the game early in the third with a power-play marker, now has scored nine of his 11 goals this season with the man advantage. Defenseman Yanni Kaldis had the primary assist on both of Mullin’s tallies, with Morgan Barron picking up helpers on both as well.

“We just have a very talented and balanced hockey team,” Cornell head coach Mike Schafer said. “It’s very business-like in our locker room. Our kids prepare well – they work hard every day in practice, study the game and play for each other. It’s a formula that has worked well, so nothing this group accomplishes surprises me anymore.”

With the victory, the Big Red advance to the New York Regional final April 13 at the Times Union Center to face the winner of Friday’s game between No. 2 UMass and No. 3 Ohio State. A matchup with UMass would make for an incredible atmosphere and a likely sellout of more than 14,000 fans considering that both schools are within a reasonable drive of the arena.

“UMass and Ohio State are great teams, and it’s going to be our toughest game of the year no matter who we play,” Schafer said. “Our fans will be here either way. That’s all that matters to us.”

After a scoreless first period in which the teams played a little tentatively and seemed to be feeling each other out – both goalies stopped all eight shots they saw – the game took on a different tone in the second.

Cornell’s Matt Stienburg was whistled for high sticking 1:25 into the period, and junior Paul Washe capitalized by netting his sixth extra-man marker of the year off a feed from rookie defenseman Ronnie Attard 47 seconds into the man advantage.

The goal was Stienburg’s 13th of the year and was ironic because it was Cornell’s third penalty of the game in slightly more than 21 minutes. Western Michigan was whistled for just one infraction in the opening 20 minutes, but would be called for nine more minors over the final 36 minutes. The Broncos were penalized five times in the second, but would survive until the final frame when two of their four infractions would lead to the tying and winning goals.

Cornell concluded the game with four penalties on its rap sheet, but only one of those came in the final 38 minutes.

“What can you say?” Broncos head coach Andy Murray said. “You have to stay out of the box. We did a great job killing penalties in the second period, but it eventually caught up with us. You can’t give that kind of team that many chances. It’s hard to tell if the crowd influenced any of the calls, but you certainly hope that wasn’t the case. Our guys battled and hung in there, but we have to be more disciplined than that.”

Man-child freshman Ben Berard knotted the game at 1 at 6:27 of the second period on a rebound for his fourth tally in the last two games, and the Big Red took their first lead of the game exactly two minutes later when sophomore Michael Regush extended his goal streak to three games with his 12th of the year on a breakaway.

Western Michigan had battled to kill off penalties immediately before each of those two scores and seemed to be losing its energy until the team’s most likely scorer, senior scoring-leader Hugh McGing, tied the game in the most unlikely of fashions.

With defenseman Mattias Samuelsson off for roughing, McGing blocked Kaldis’ point shot, streaked in all alone and zipped a quick snap shot past Cornell goalie Matthew Galajda with 8:23 left in the period. While it was McGing’s second shorty of the year, it was just the Broncos’ third tally as a team while playing a man short.

Just like that, a switched flipped and the Broncos swarmed Galajda and the Big Red net – minus the two minutes they spent killing their fifth penalty of the period – for the next 7-plus minutes before junior Austin Rueschhoff took a feed from senior Dawson DiPietro cutting across the high slot and fired a shot back against the grain that found the top corner of the net with 1:09 left in the period.

Miraculously, Western Michigan would take a 3-2 advantage into the final period after outshooting Cornell, 12-2, over the final eight minutes of the second. The Broncos held a 25-15 shots advantage and a one-goal lead heading into the final 20 minutes.

“You get through that period with a lead and you really feel like you had weathered the storm,” Murray said. “I mean there’s no way we could keep committing penalties, right?”

Mullin’s first power-play marker of the game would come just 1:43 into the third, and this time it would take the wind out of the Broncos’ sails once and for all. All five heads or players on the ice and many on the Western Michigan bench dropped when his one-timer found the twine.

From that point on the Big Red would dominate, outshooting the Broncos 13-3 over the game’s final 18 minutes and finally breaking the dam with the game-winner in the final minute.

“I don’t think we were ever nervous,” Galajda said. “Watching from the other end you could just see how much energy they were using to kill the penalties and how much it was taking out of them. It felt like a matter of time until we would finally break through. I have to give them a ton of credit for their effort, though. They battled and clawed and had a chance right up to the end. We’re happy to be moving on.”