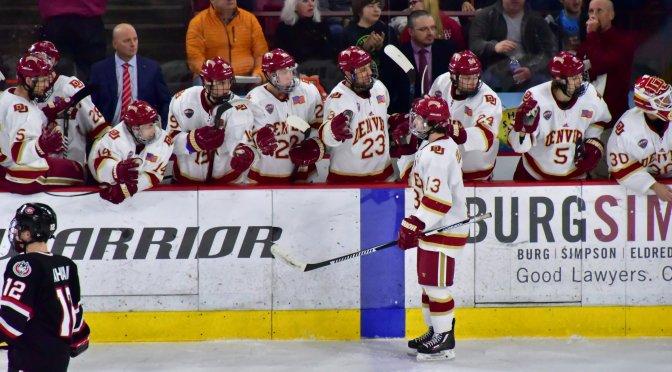 Well, we made it almost halfway through the first round of the 2020 NCAA Division I Men’s Ice Hockey Championship before we got our marathon overtime thriller.

The Colorado Regional semfinal game between second-seeded Denver vs. third-seeded Bemidji State certainly lived up to its billing as the toughest opening-round game to call. And then some.

With East Coast viewers preparing to set their alarms so they could nap during the upcoming intermission and not miss the third overtime, Denver’s diminutive Liam Finlay, usually the Pioneers’ set-up man, stuffed home a rebound with 2.2 seconds left in the second extra period to lift Denver to a 3-2 victory Sunday in front of what amounted to a home crowd at Budweiser Events Center in Loveland, Colo.

Finlay squeezed home the game-winner on his team’s 51st shot of the night to send the Pioneers into the April 11 Colorado Regional finals against top-seeded Minnesota State, a 5-2 winner against fourth-seeded Arizona State Friday. The 2020 national tournament has yet to produce its first upset of any magnitude.

“We always expect Liam to make something happen when he’s on the ice,” Denver head coach David Carle said. “That’s why he was out there in that situation. He’s our senior playmaker, but with the clock winding down and him being more of a pass-first guy, I was really thinking about how to keep our guys focused and fresh for the third overtime. Let’s just say I didn’t have Liam in the Bucci Overtime Challenge.”

His loss, but it proved to be a heart-stopping victory for Carle’s team.

Oddly, in what was the 12th overtime game combined for the two teams this season, Finlay’s goal was only the second scored for or against either team in extra time. And despite his multiple whacks at the elusive biscuit, no one was certain the puck went in until Denver fans behind the goal erupted in celebration.

Ian Mitchell, another player who always seems to be in the middle of things and the second-leading scorer for the Pioneers, started the game-winning sequence by intercepting a failed clear that had been wrapped around the boards at the right point and walking toward the middle of the ice just inside the blue line.

With 6 seconds on the clock he wound up as if to blast a slap shot, and as two Bemidji players who had gone down to block the attempt slid by, Mitchell instead threaded a wrist shot through a maze of bodies that glanced off the leg pad of surprised junior netminder Zach Driscoll and fluttered into the crease toward the left post where Finlay was waiting. He fanned on his first attempt at swatting the rebound home before connecting on a second offering that was stopped by Driscoll.

It was the third attempt that proved to be the charm, though, slithering through the flailing goalie’s pads and just across the goal line. There was no awaiting the referee’s ruling on this one as thousands of goal judges in Pioneer colors let the players know that the game was over.

An exhausted Driscoll slumped forward to the ice as the energized Denver players stormed the ice and chased their hero down, mobbing him at the opposite end of the ice from where the goal was scored.

“You dream about goals like this as a kid,” Finlay said. “But to be honest, I always figured I’d be the guy setting up the game-winner, not the one scoring.”

A dejected Driscoll, who finished with 48 saves, could not fault anyone’s effort on the final play.

“We had guys throwing their bodies around trying to block their shots,” the junior second-team All-WCHA selection said. “It was such a scramble. I got the first one, but somehow the second shot found its way in. It’s a shame, but I couldn’t be more proud of this group of guys.”

Finlay’s tally ended nearly four full periods of scoreless hockey as both goalies found their rhythm following a four-goal opening period resulted in a 2-all deadlock after 20 minutes. Driscoll stopped 33 of the 34 shots he faced over the final 89-plus minutes, while Denver’s Magnus Chrona turned aside all 31 of the offerings sent his way during the same span to finish with 44 saves.

After the game’s opening 10 minutes and four goals, no one could have guessed that these two teams would only score one more over the next 89 minutes.

The Beavers got on the board first 4:48 into the first period when junior Aaron Miller trailed a 3-on-2 rush and one-timed a drop pass from Owen Sillinger past Chrona low on the blocker side for his 13th tally of the season. The goal capped a break-neck opening five minutes that featured several odd-man rushes for both teams, a shot off the post by Sillinger and spectacular saves by both goalies.

A boarding penalty on Bemidji’s Brad Johnson slowed the pace a little bit as the Pioneers’ power play went to work 2:04 after Miller’s goal. And it took just 17 seconds with the man advantage for sophomore Cole Guttman to rip his team-high ninth power-play goal – and 15th goal overall – past Driscoll from the high slot. Mitchell picked up his first of two primary assists with a smart feed from the half wall, and Emilio Pettersen was credited with the second helper.

Charlie Combs broke the tie and a personal four-game scoring drought by potting his 13th of the year behind Chrona on an unassisted breakaway after a neutral-zone communication breakdown between Denver defenders 8:15 into the period. The Beavers’ lead would last only 1:39 as junior Kohen Olischefski scored on his own rebound at the end of a 2-on-1 break to conclude all scoring for the next 4-1/2 periods.

“When a game starts off with that kind of pace you know it can’t continue for long,” Bemidji head coach Tom Serratore said. “But you never expect that a game is going to go on as long as this one did. You could see by the end of that second overtime that both teams had very little left in the tank. If we just could have held on for a couple more seconds, who knows what might have happened? It was a battle of wills at the end, and they willed the puck a couple inches over the line.”