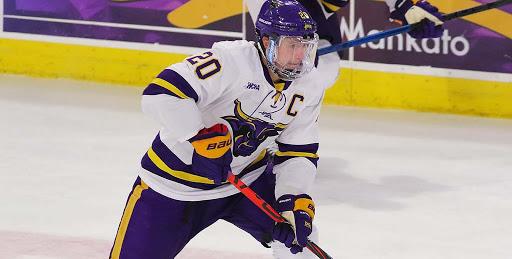 NCAA Simulation: Mavericks Say No to Another Upset

Given that top-seeded Minnesota State had beaten fourth-seeded Arizona State twice already this year by a combined score of 9-1 while running up a 67-40 shots advantage, Saturday’s Colorado Regional semifinal matchup between those two teams appeared to favor the blowout scenario. Five minutes into the game, though, it looked more like upset city.

Minnesota State spotted the fast-starting Sun Devils a 2-0 lead in the game’s opening 4:47 – and trailed by the same score after the first period – before rallying for five unanswered goals over the final 40 minutes to earn a 5-2 victory and advance to the regional finals at the Budweiser Events Center in Loveland, Colo.

The game was a microcosm of both teams’ seasons as Arizona State entered the contest having outscored its opponents, 35-19, in the first period, while the Mavericks owned a 115-39 scoring advantage against their foes in the second and third periods. Early on the contest also brought back painful memories of last year’s first-round exit by the No. 1-seeded Mavericks via a 6-3 loss to fourth-seeded Providence.

“I would say the difference this year was that there was no sense of panic at all on the bench,” Minnesota State coach Mike Hastings said. “It certainly is a wakeup call when the best goalie in the country gives up two goals on the first three shots he sees, but we all had complete faith that he would shut the door the rest of the way and that eventually we would break through on the other end. There is too much veteran leadership and ability in our locker room for us to just fall apart with 55 minutes left to play.”

Hastings and his team were right about sophomore goalie Dryden McKay, the WCHA Goaltender of the year who is a Hobey Baker and Richter Award finalist. McKay, who led the NCAA in goals-against average (1.31) and save percentage (.942) and recorded the second-most regular-season shutouts in NCAA history (10), stopped the next 23 shots he faced, allowing his teammates to rally.

The Mavericks outshot the Sun Devils, 33-23, over the final 55-plus minutes for a 34-26 overall shots advantage. ASU netminder Evan DeBrouwer stopped 29 shots.

Senior Marc Michaelis, also a Hobey Baker finalist and the nation’s second-leading scorer, notched two goals and an assist to lead the Maverick onslaught. Minnesota State is now 16-0 when Michaelis, the only player in the nation to rank among the top 20 in points, points per game plus-minus and short-handed goals, scores a goal. He has 47 points for the season and 19 in his last 10 outings.

“When Marc scored early in the second period a sense of calm came over the bench,” Hastings said. “We didn’t overreact to the early deficit and didn’t get too high after just one goal. You could see from the muted celebration that we were all business. In these types of games your seniors and top players have to set the tone. The players really don’t rely on guys like me behind the bench all that much. It has to come from within.”

Michaelis sandwiched his goals around a power-play marker by linemate Parker Tuomie during the middle stanza to lift the Mavericks to a 3-2 lead after 40 minutes. Freshman Nathan Smith scored early in the third for his eighth point in the last seven games, and senior defenseman Ian Scheid notched his fifth point in three games vs. the Sun Devils on a goal with 7:14 remaining to secure the final margin of victory.

“You know, you go from feeling like you let the guys down early to just doing everything you can to buy them time to come back,” McKay said. “Of course I wasn’t happy with the start, but I had confidence in myself that I could keep us in it and allow us to eventually come back. With guys like the three who scored our goals it’s really just a matter of time.”

ASU’s stars also came to play, with their top-two scorers doing the early damage. Brinson Pasichnuk tallied first on an odd-man rush 1:36 into the contest, and Johnny Walker banked his 19th of the year in off a defender at 4:47. Pasichnuk and Walker both conclude their seasons with 35 points.

“I couldn’t be more proud of our guys,” Sun Devils coach Greg Powers said. “To make the NCAA field twice in our first five years as a Division I program as an independent is a testament to my staff and the buy-in we have gotten from our players. They’ve had a taste of it now for a couple years and know what it takes to advance. That will be our goal in the future – to become a regular national-championship contender.”

The Mavericks advance to the Colorado Regional finals where they will take on the winner of Monday’s game between second-seeded Denver and No. 3 Bemidji State April 11 at Budweiser Events Center.