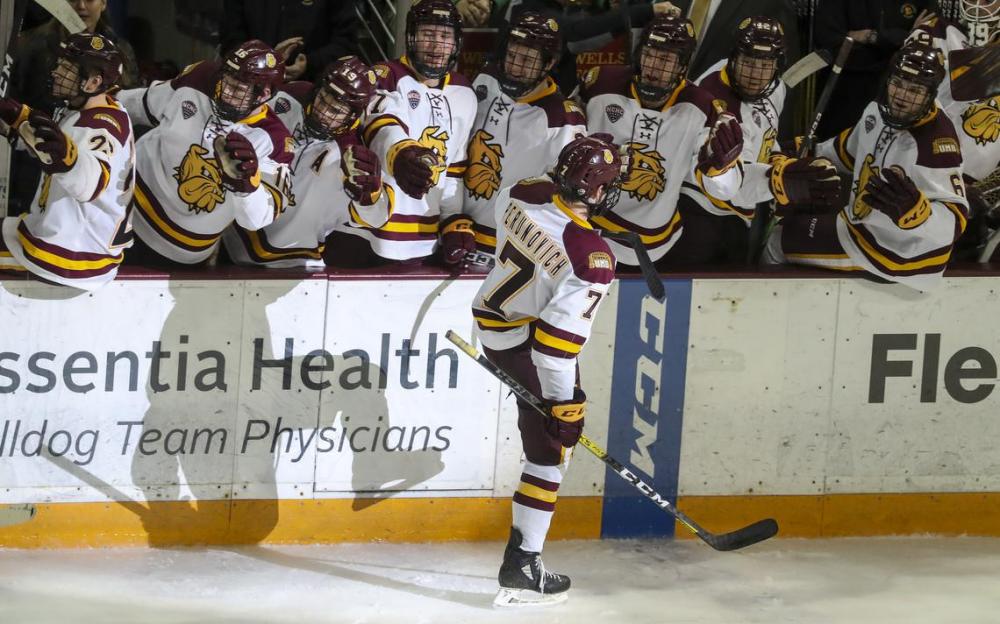 In a matchup that seemed to be more fitting for the Frozen Four than the opening round of the 2020 NCAA Division I Men’s Hockey Championship, fourth-seeded Michigan had top-seeded Minnesota Duluth, the two-time defending champs, on the ropes but just couldn’t deliver the knockout blow.

Instead, the experienced Bulldogs played rope-a-dope until they could figure out one of the nation’s top netminders.

They clawed their way back into the game, finally getting over the hump with just over five minutes remaining when red-hot sophomore forward Cole Koepke extended his point-scoring streak to 11 games, finishing off a slick feed from defenseman Scott Perunovich, for the fourth goal – and eventual game-winner – in a 5-3 victory at DCU Center in Worcester, Mass.

The victory kept alive UMD’s hopes of achieving the sport’s first championship three-peat since their opponent, the Wolverines, captured three-straight titles from 1951-53. Minnesota Duluth advances to the Massachusetts Regional final to face the winner of Thursday’s first-round matchup between second-seeded Boston College and No. 3-seed Clarkson.

The champs are still the champs until someone knocks them off.

“We knew when we saw Michigan’s name pop-up on the screen during the selection show that this was going to an incredibly difficult matchup,” Bulldogs coach Scott Sandelin Said. “It’s not often that you can spot one of the best goalies in the nation a two-goal lead in the first period and find a way to win. Being able to come back like that is a tribute to the leadership and experience in our locker room. There is no panic in this group."

Michigan super sophomore Strauss Mann entered the game ranked seventh in the nation in goals-against average, allowing just 1.85 goals per 60 minutes, and third in Division I in save percentage at .939.

The game was billed as a matchup of one of the nation’s deepest forward groups against Mann and a stifling defense. UMD ranked 10th in the nation in goals per game at 3.35 and had eight players with 20 or more points, while the Wolverines allowed just 2.0 goals per game, seventh best in the nation.

But it was the Wolverines who knocked the Bulldogs off-balance early, getting a power-play goal from Nick Pastujov just over three minutes into the game and an even-strength tally two minutes later from team scoring-leader Jake Slaker for a 2-0 advantage. It was Pastujov’s 10th goal – and seventh with the extra man – on the season. Slaker’s marker was his 15th and extended his point-scoring streak to five games.

The second tally seemed to wake up veteran goaltender Hunter Shepard, who in turn woke up his teammates with two point-blank saves in quick succession just seconds after Michigan scored its second goal.

Minnesota Duluth would not tally in the opening frame, but picked up the pace and physicality over the final 10 minutes, peppering Mann with a dozen shots to seize control of the momentum heading into the second 20 minutes.

UMD’s onslaught carried over into the second period and finally paid dividends when Perunovich’s soft wrister from the point was deflected home by junior Justin Richards after just 75 seconds. That would be the first of three helpers for Perunovich on the day and was Richards’ third goal in the last two games and 15th on the season.

The Bulldogs maintained the pressure, but Mann was a brick wall until the momentum unexpectedly swung back in Michigan’s favor. With sophomore forward Garrett Van Wyhe serving a penalty for hooking, Luke Morgan chipped a clear out of the zone and outraced UMD’s defense to the puck before sniping a laser past Shepard for a 3-1 advantage with 8:25 left in the second.

Although he didn’t come up with that save, Shepard got his guys going again with the Wolverines circling for the kill. Energized by the short-handed goal, Michigan turned up the pressure after killing the penalty and forced Shepard to come up big three more times over the ensuing three minutes.

Immediately after his third save, Perunovich knocked a pass out of mid-air and found a streaking Noah Cates behind the Michigan D for a breakaway. Cates made a shifty deke and slid a soft backhander through Mann’s pads to cut the margin to 3-2 with fewer than 3:48 remaining in the period. That’s how the period would end, setting the stage for the third-period comeback.

The Bulldogs recorded the first eight shots of the third period, including a bid from Koepke that glanced off the post on the first shift, before senior Jade Miller smacked home a loose puck that had pinballed of the defense in front of Mann for his second goal of the season to tie the game with 11:42 remaining.

Seemingly relieved to have buried the equalizer, UMD backed off a little bit over the next several minutes, and a suddenly nervous-looking Michigan squad did the same. Several tentative plays by the Wolverines in the defensive zone would lead to Koepke’s game-winner.

After two failed clearing attempts by Michigan, Perunovich kep the puck in for a third time then eluded one player attempting to pressure him at the point. With the Michigan players scrambling to block his shooting lane, Perunovich walked in and wound up for an apparent slap shot. Two Wolverines went down to block his attempt, but instead of shooting he slid the puck diagonally to the right-wing circle where Koepke one-timed it into the yawning cage.

UMD killed off the final 5:15 after Koepke’s marker, icing the game with Kobe Roth’s empty-netter with 22 seconds on the clock.

Shepard earned the win after a shaky start, allowing just one goal over the final 54 minutes and finishing with 27 saves. Mann also stopped 27 UMD shots in suffering the loss.

Online voting for Game 2 of the MHR NCAA Championship Simulation, BC vs. Clarkson, will take place on Twitter Wednesday, March 24 starting at around 9 a.m. Eastern time.